Monthly Feature
Stacy brings you the latest from the world of fast food!

In 1950, the first Whataburger ever opened in my hometown of Corpus Christi, TX. From that day on, things would never be the same. Where did we High School kids hang out after a football game? Whataburger. Where did we go after a night of underage drinking when we had the munchies? Whataburger. (It’s open 24 hours, ya’ll!) Where did we study before class? Whataburger. None of this Starbucks shit. In fact, Corpus didn’t even get a Starbucks until a few years ago. We’re known for TWO things and TWO things only, people! Selena, and Whataburger! And we’re damn proud. 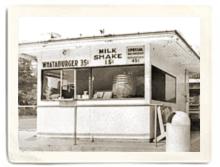 The original Whataburger was just a wooden kiosk that sold 35 cent hamburgers.*

In Corpus, Whataburger is a big deal. Our minor league baseball stadium is called “Whataburger Field” and up until 2009, the headquarters were located there (they’ve since moved to San Antonio).

I can’t tell you the joy I experience when I see that orange and white striped W hovering high above the highway on long trips home or wherever I might be going – as long as it’s in Texas, Tennessee, Florida, Arizona, New Mexico, Oklahoma, Louisiana, Arkansas, Mississippi, Alabama, and/or Georgia. Sucks for the rest of you!  Whataburger is just…well…it’s home.

And there’s one Whataburger in particular that’s worthy of mention – the two-story hamburger haven known as “Whataburger by the Bay.” 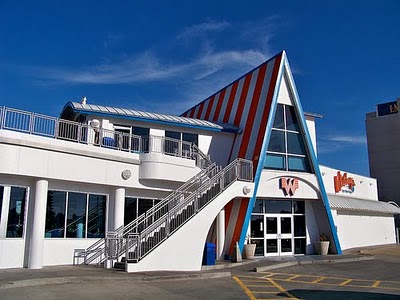 Whataburger by the Bay*

Whataburger by the Bay is the company’s flagship store, and it’s far different from any other Whataburger restaurant in a number of ways. The 6,000 square feet restaurant opened in 1999, is two-stories tall, offers great views of the water, and features a bronze statue of Whataburger founder Harmon Dobson that sits just outside. Sure, I could have taken the obligatory “molest the statue” picture, but I’m a classy broad, folks. So I did it off camera. 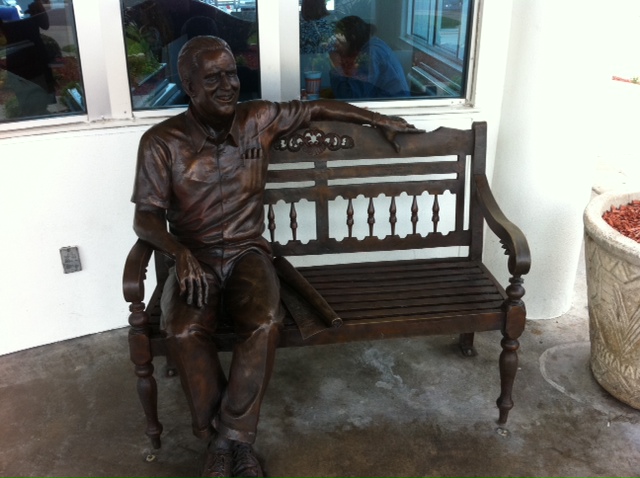 They also sell tons of merchandise and operate more like a real restaurant than any other Whataburger, with wait-staff that come around to your table offering napkins and condiments. 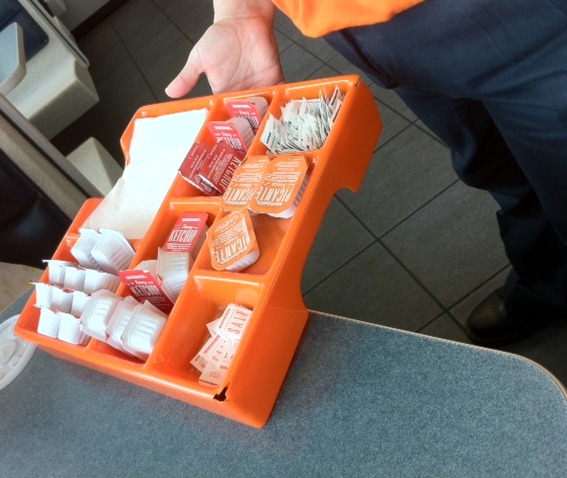 Talk about fancy! They also have a manager by the door who greets you and walks around to make sure your meal has been made “just like you like it.”

And let me tell you, this place was PACKED when I paid them a visit. Upstairs and downstairs. 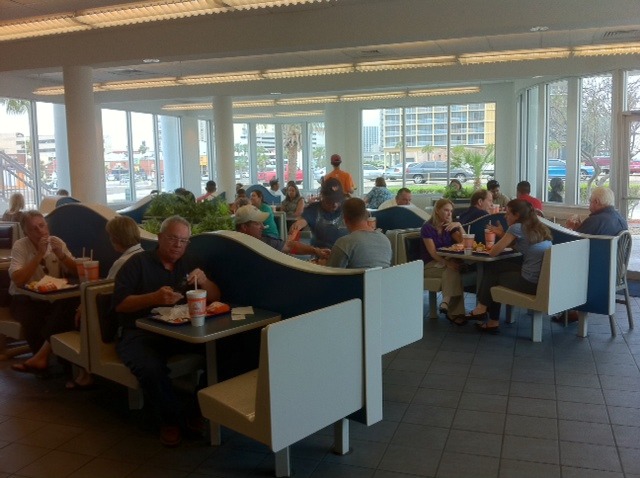 But I’m not just here to tell you about this amazing feat in American engineering. I’m here to talk about food too! And while inside Whataburger Nation, I opted to try their “Chop House Cheddar Burger” since it’s a limited time only item. 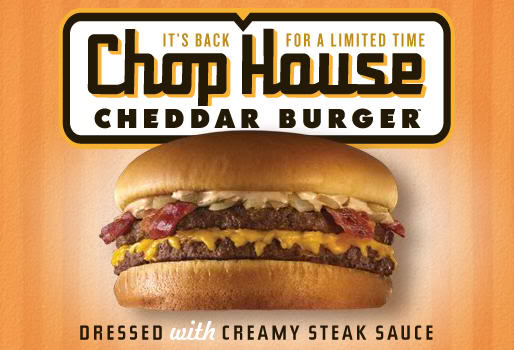 The advertisements sure do make this burger look delicious. But does the real thing hold up? Let’s see… 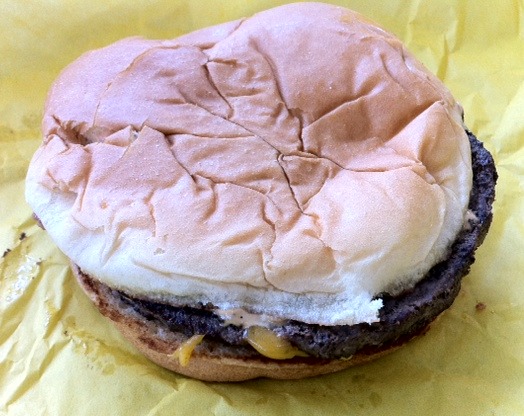 Hmmm…that doesn’t look like the advertisement. But nothing really ever does. What’s inside this bad boy? 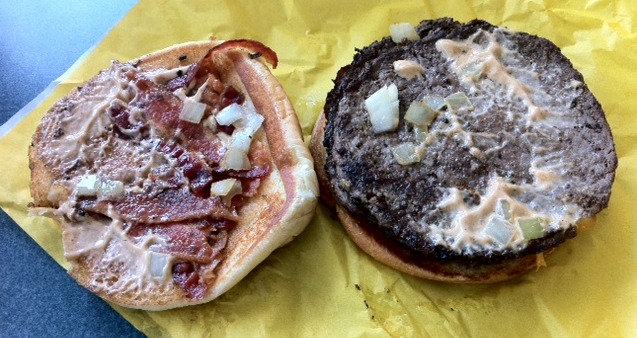 And what about the taste? Well, let me preface this by saying that I LOVE WHATABURGER. In case you couldn’t already conclude that. I seriously think it’s one of the best fast food burgers I’ve ever had. And besides that, I love their breakfast tacos, that honey butter chicken biscuit they bring back every once in a while, as well as that barbecue chicken sandwich. DELISH! Whataburger is good stuff, people! This Chop House Cheddar burger, however, is not.

EW. GROSS. I’m pretty sure those were my exact words when I bit into this greasy, artery clogging, heart-attack inducing thing they call a burger. I don’t know what’s in that creamy steak sauce but it tasted like a certain male bodily fluid. Mixed with some mayonnaise. Not that I would know what that tastes like, but either this sauce is just really disgusting or someone played a prank on me and put a little “happy sauce” in my meal. I’m gonna go with the former. For peace of mind.

As for the rest of this burger, it really had no distinguishing taste. Honestly, it probably would have been better if some tomatoes and lettuce were there to break up the full-on lard taste. But I ordered it the way they serve it and the way they serve it sucks. For lack of a better word.

Needless to say, I am not a fan of the Chop House Cheddar Burger and I’m glad it’s a limited time item. Not that it really matters. I would never order it again.

So let’s break it down.

What kind of brownie points does Whataburger by the Bay get?

*Atmosphere – it is right on the bay, so you’ve got some pretty good views of the water. Plus, it’s generally a lot nicer inside than other Whataburger’s you’ve probably been to. I mean, it IS their flagship store.
*Service – with wait-staff bringing fancy ketchup to your table and a manager at your beck and call, for a fast food joint, the service here is impeccable!
*Cool Factor – it’s a two-story Whataburger, people! I think that might be the closest to heaven most of us will get. As long as the Chop House Cheddar Burger isn’t there.
*Convenience – it’s open 24 hours…which is just plain awesome. But they should make their breakfast hours 24/7 as well. 11:00 PM – 11:00 AM is no fun. Sometimes I want a taquito for lunch, damnit!

I’m deducting points for one thing and one thing only –

*Nobody wants a burger that tastes like someone jizzed in it.

This is hilarious!I love this entry!

Outside of Corpus, Whataburger will be relegated to Sonic status once In and Out finishes their takeover 😉

I want this line on my tombstone: “Nobody wants a burger that tastes like someone jizzed in it.”

It’s so profound and true.

OMG- that looks and sounds terrible. I typically like Whataburger too, definitely will stay away from that one. Hilarious!

Did someone sit on your burger? That looks awful.

WHAT THE HELL IS ”SONIC”?WHATABURGER RULES!

so, as this burger came back on the regular menu, I decided to give it a try. I couldn’t agree with this evaluation any less!! I love this burger!! oh well, there’s soething for everyone out there. 🙂