Mondays are dedicated to bringing you a restaurant review!

The Background
Sara had a conference in San Antonio a few weeks back. It was a quick day/night trip in a hotel on the Riverwalk. I hadn’t been to SA in awhile, didn’t want Sara driving in that sh*tty weather, so I tagged along. Our hotel was a few blocks away from Schilo’s. Given our oddball hours, I ended up hitting the place twice.

The Scene
Schilo’s is an old-timey German deli located in the heart of downtown San Antonio. The place has moved around a few times over the years, but has been in its current location since the 40’s–ton of character. I’ve eaten there a few times and have never been disappointed, nor overwhelmed.

The Food
The food was solid. I got a Club for dinner one night, and sausage, eggs, and potatoes for breakfast the following morning. The sausage was the best thing, by far. I had a feeling it would be and it didn’t disappoint. My eggs were “diner solid”, but my tiny diced potatoes were nothing to write home about. 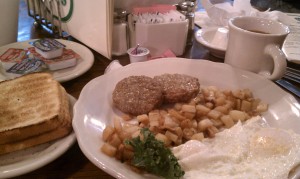 The Verdict
Schilo’s is the definition of solid. I’m sure there are some dishes better than others, but it’s a nice place to go in SA if you’re not in the mood for below average Riverwalk eats.  And with not a lot of downtown breakfast options, Schilo’s is a nice landing spot.  I lived in SA for three years in college. The food, for the most part, in this city is nothing to get excited about.  But there are some gems. Just not in the touristy areas (as you might guess).