While I do enjoy a nice tasting menu at a white tablecloth restaurant, I am happiest eating good food from good people over the hood of my car. I like places that make me feel at home, places where they already know what they’re about, have been doing it a long time, and embrace it fully. A place that the neighborhood adopts. A place that adopts the neighborhood. A place like that old Cheers song, the one where everybody knows your name. Those types of places are rare, but stick out firmly in my gastronomic memory. This month, I’ve added another good one with K Hall & Sons Produce.

K Hall has only a dozen spots for cars out front, but there’s a ton of parking out back on the gravel lot. Wherever you park, you enter through the front of the store, pushing your way through those clear plastic hanging louvers that you might remember hanging down from the cooler doors from your days working in a restaurant or grocery store. Work your way to the back counter, left of the meat display, and get in line next to where the fried chicken is kept warm for you. There’s a menu taped to the wall next to the fried chicken warmer.

The menu is large, but is generally composed of fried chicken, hot wings, pork chops, burgers, BBQ sandwiches breakfast sandwiches, the side dishes composed of potato wedges, fries and onion rings, and an assortment of cakes and pies whole or by the slice. (Then of course there’s the seafood boil each Saturday, which has its own separate menu and rules—or maybe warnings—for the line.) K Hall’s menu was so large that I decided to tackle it in pieces, over several visits. I ended up coming seven times, finding several favorites, as well a few items to just pass on by. Down below, I give you a ranking of what I thought were those hits and misses, in order of their gastronomic success.

But let’s say you don’t like good, homemade country cooking. You can still find plenty of things to like at K Hall. Its freezers are stocked full of lima beans, black eyed peas, smoked sausage from Louisiana’s DD Ranch, rabbits, alligator, crawfish, angus burgers, Leidenheimer bread, shrimp, crabs, chicken strips, and hot wings. Over in their deli case, right below the sign that tells you that they can’t serve you if your drawers are showing, you’ll find quarts of greens sold in their pot liquor (I haven’t tried these, but have hard eyeballed them twice now; time’s a coming), butter beans, chicken soup, thick pork steaks, thick sliced bacon, homemade chili, turkey legs and necks, smoked ham hocks, fresh ground beef, and an assortment of Petit Jean lunchmeats. I noticed that the products varied on each visit, which was nice, telling me that they are selling fresh and selling out. That’s always a good thing, but it means you might want to call ahead if there’s something in particular you would like for them to set aside for you.

The Saturday Seafood Boil
As far as I’m concerned, K Hall’s Saturday seafood boil is a best kept secret here in Little Rock. You have your choice of shrimp, crab, or lobster. For $12.77 I got a mixed pound of 10 huge shrimp and a half crab with 5 nice long legs, a boiled red skin potato, a half ear of corn, some boiled onion, jalapeño pepper, some sweet pineapple sprinkled with the Slap Ya Mama seasoning, and an unfortunately forgettable (even regrettable) piece of sausage. (The right way to prepare sausage for your seafood boil is to boil it whole, and not cut it up first. If you cut it up first, all of the savory notes and spice-filled nooks and crannies get washed away into the boil, and you’re left with boring, almost tasteless sausage. I think that’s what happened with the sausage here.)

But, oh! These big shrimp are beautiful. Really beautiful. Plump and tender; the kind of shrimp you dream of when you think of a good seafood boil. The crab is perfectly cooked and sweetly redolent of the sea. (They don’t crack it for you, so if you’re planning to eat it in your car, bring along that crab opener you lifted from Joe’s Crab Shack last summer.) I ordered it with the hot Slap Ya Mama seasoning sprinkled over the top, which gave it a nice pleasant burn that might be too hot for others. Maybe try it with the mild Slap Ya Mama’s first. They’ll give you that choice.

The K Hall seafood boil is a super deal at this price. Really, it’s unheard of at this price. And without a doubt, the 1 pounder option was plenty of food for me, one hungry dude. Buuuut, if you order the 2 pounder instead ($22), you get upgraded to the much bigger crab legs. And I was super jealous of the folks that ordered them. So maybe find a friend and split the larger order. It really looks like it’s worth it. 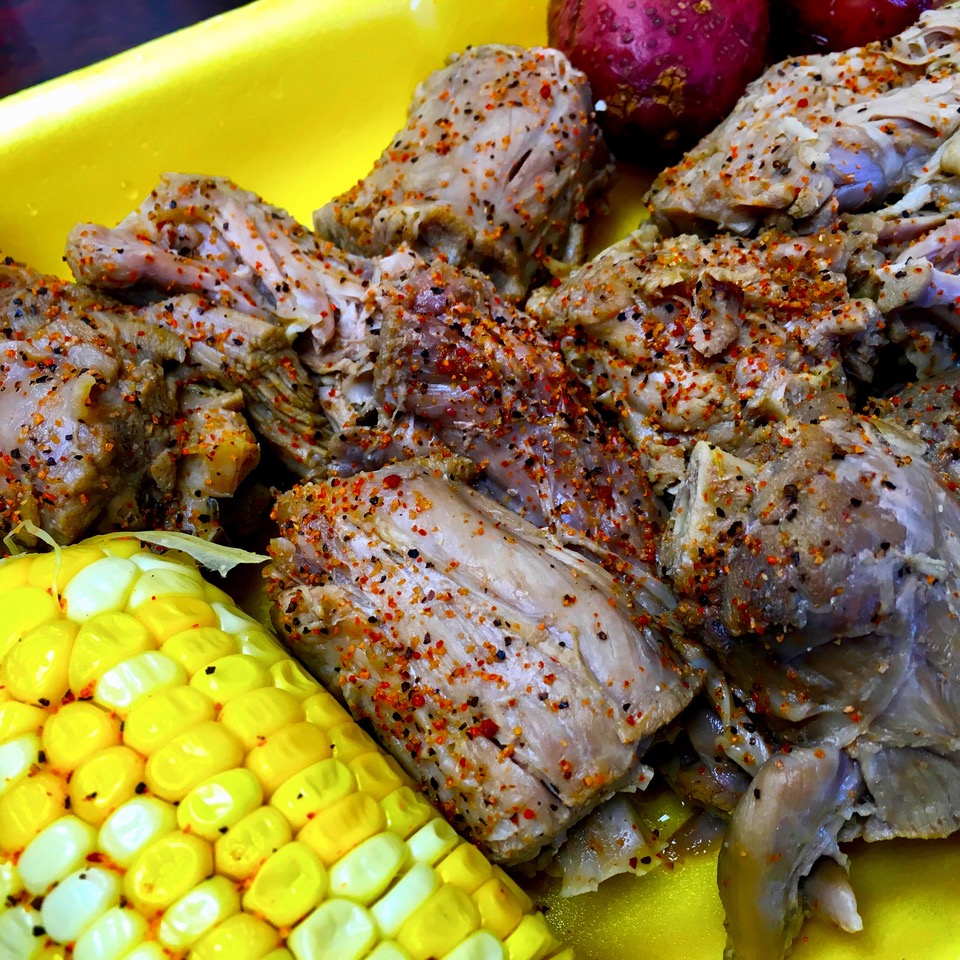 Cajun Turkey Necks
We have to talk about K Hall’s cajun turkey necks. When I was picking up my crab and shrimp tray at the seafood boil, I got to talking with the gentleman helping me. I told him it was my first time having their seafood boil, and from the look and smell of it all, I was really looking forward to it. He’d asked if I’d ever tried their turkey necks before, and I told him that turkey necks were a new delicacy for me. So he gave me a nice big juicy sample and sent me on my way, predicting that I’d be back for more. He was right; as I sat in my car nibbling and sucking on that hot, spicy, dripping turkey neck, I almost went back for a plate right then. But in a rare exhibition of inner strength and fortitude, I resisted doing so that day. I did however come back the following Saturday to order a plate full of those turkey necks.

The necks are cut down to 2-inch pieces and are boiled in water that has been liberally doused with Slap Ya Mama seasoning. They are served like the other seafood boil entrees with a half ear of corn and some boiled red potatoes, all for $4.99 a pound. (Once again, I found that a pound portion is more than plenty for one person.) Turkey necks are dark meat, and K Hall’s preparation leaves them super juicy and tender, rich in turkey flavor and with a nice kick of red pepper heat that doesn’t over power them. I found them to be delicious, addictive, and fun to eat. I’ll come back for these often, especially as the summer turns to cool fall days. For me, nibbling on these spicy turkey necks outside on a cool day might just be a perfect moment.
Fried Chicken and Potato Wedges

Don’t let the existence of that fried chicken warmer fool you. Nothing in there is old or warmed over. I bet by the time you have reached the front of the line, you’ll have seen the metal pans being replenished from the larger kitchen in the back at least a time or two.

For chicken, you have a choice of leg, thigh or wing. I am generally a dark meat guy, but recommend you order a three-piece combination with one of each ($3.99, extra pieces are $1.49 each) (if you’re into white meat, you can also order a chicken breast meal for $2.99, with an extra piece for $1.99). The chicken comes out super juicy inside and super hot outside. You really have to watch it! I know it will be hard to see that golden yellow crispiness and smell that alluring fried chicken smell and resist from diving in. But truly, it’s like lava in there.

When you do dive in, which I know will be far too early, you’ll find that the crispity crunchity chicken has a snappy crust, and leaves almost no oil residue on your hands (which of course indicates just how hot that frying oil was!). And note that if you decide to devour the chicken inside your car with your air conditioning running, as I did, you will also find that the crispity crunchity crust flakes everywhere. You might want to wear a poncho.

Served alongside the fried chicken are 4 or 5 potato wedges (that part depends upon the person packing your box), also deep fried in that fresh hot oil (extra potato “logs” are $0.25 each). They too come out nuclear hot and ready to sear the fingerprints off your hands, which of course I did just picking them up to photograph them. It’s a good thing I had a cold glass liter bottle of Mexican Coke to cool my paws and, after what seemed an interminably long wait, to wash them down. They keep those in the big icy tubs in front of the ordering counter. 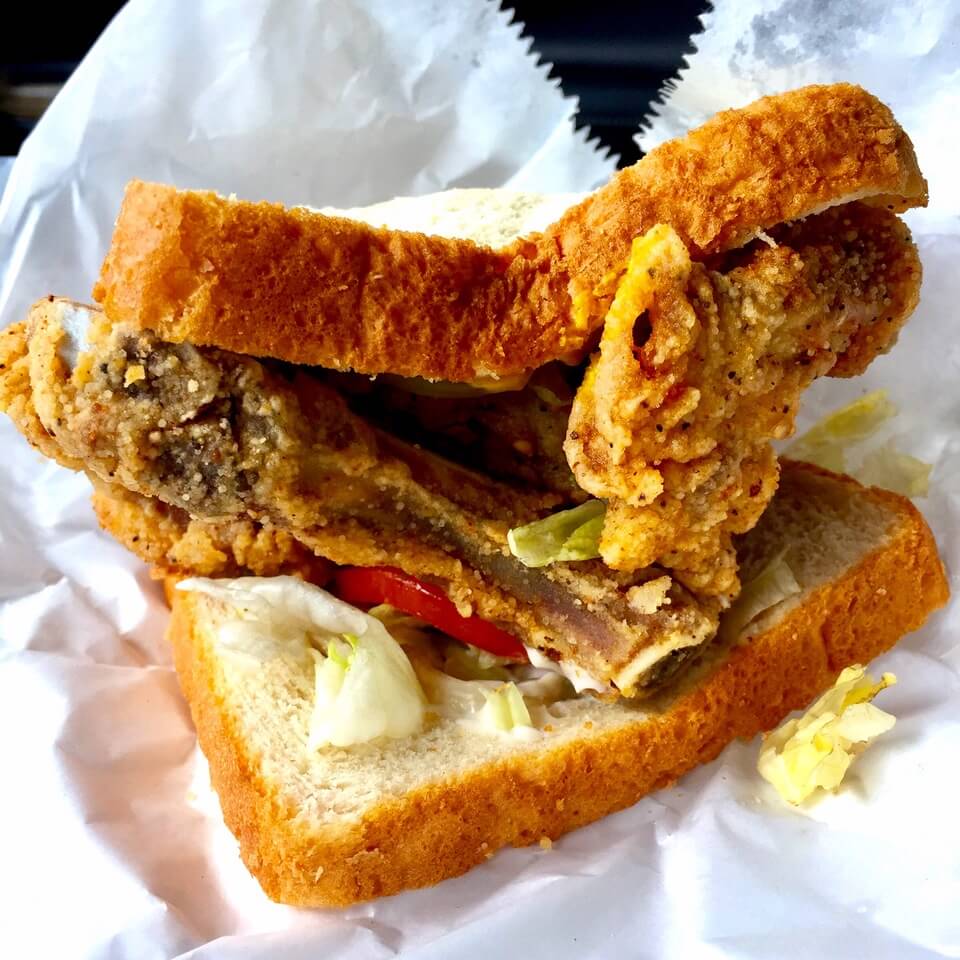 Fried Pork Chop Sandwich
Oh, the fried pork chop sandwich. Even if a shrimp boil or turkey necks are not your thing, you really need to run over to K Hall to try their fried pork chop sandwich ($2.99; with a side of potato wedges, $4.20). It’s an experience unto its own. I firmly believe that if there’s a sandwich Jeanie out there, this is the one I dream of. I have come back again for this sandwich, and will make it part of my regular rotation.

I had never had a fried pork chip sandwich before, but I can tell you it really is a delight. It comes as a large crunchy fried pork chop that has been folded over after frying so that it can fit onto two thick slices of white bread. The inside is tender and juicy, like the fried chicken.

They’ll ask you what you want on it, but tell them you want everything, which means it comes with lettuce, tomato, onion, pickle, mustard and mayo. With it dressed like that, it’s very, very reminiscent of your favorite New Orleans po’boy. Get it with the potato wedges and douse both of those with hot sauce. (They keep the hot sauce in the large red ketchup type bottles on the end of the ordering counter.) Note that the pork chop is bone in, so one end of your sandwich will have a bone. You just eat around it a bit. 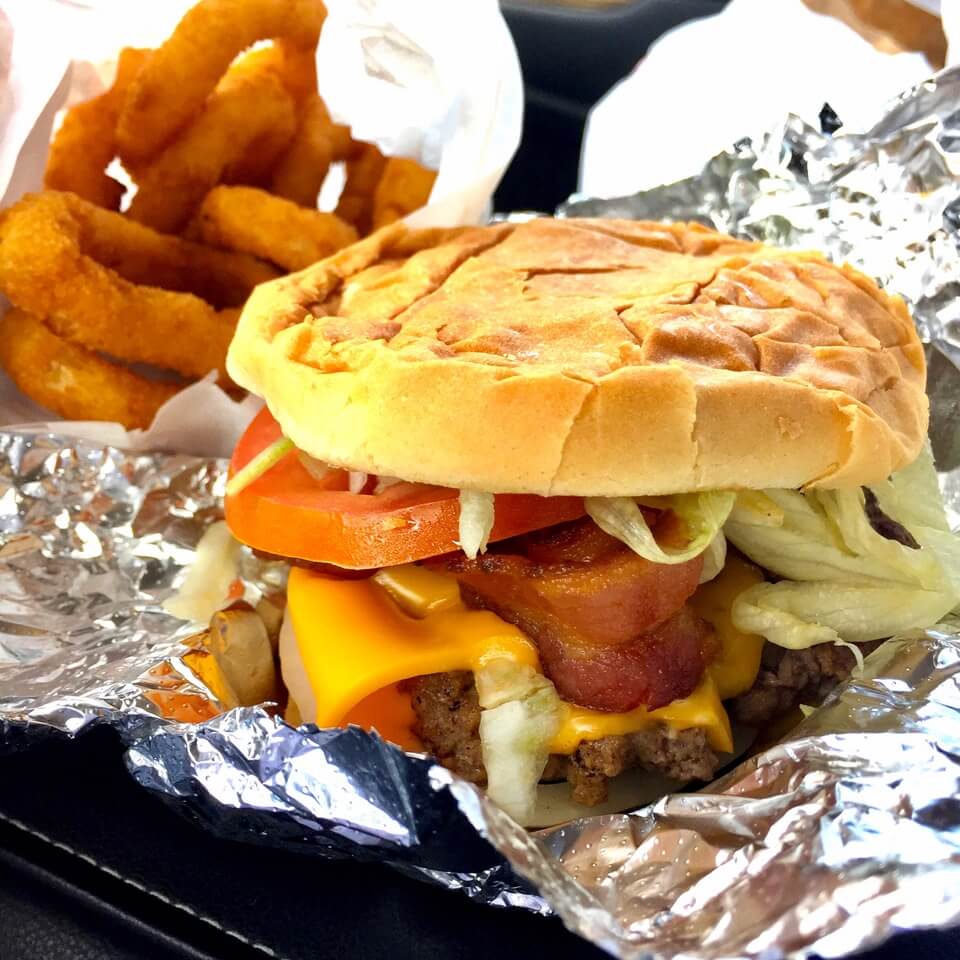 The Bacon Cheeseburger
Not everything imprinted a delicious food memory on me. I had heard about the K Hall bacon cheeseburger before, and knew that it was made from the meat trimmings from the steaks they sell, so I wanted to try it. Mine came with crispy bacon, iceberg lettuce, a slice of tomato, sliced onion, and ketchup and mustard. I thought it was a decent burger certainly, but not a special burger. I liked that it clearly was hand formed from fresh ground beef, but would have liked it less packed together, less compact, and ultimately much juicier. I can imagine how this burger could be good on a different day, but today was not that day. Alas. But I would try it once again, to see if I just had it on an off day. The cheeseburger is $3.69, fries are $1.49, and onion rings are $1.19. I have had both the fries and onion rings and found them uninspired, fresh from a frozen bag I suspect. I’d opt for those potato wedges instead.

It turns out it was chopped beef barbecue in a rich brown barbecue sauce. The meat was so finely chopped that at first bite it was difficult at first to decide if it was pork or beef, and all the discernible smoke came from the sauce itself. It was just passable. Or maybe better said, pass-on-able. About what you would expect for a place with no visible smoker.

Get the fried pork chop sandwich instead.

Check out WooPigFoodie.com for recipes, kitchen chatter, and more!