Each week, I’ll take a look back at what some of the best food writers in Houston are covering. Good or bad…you’ll get my honest opinion. And just so we’re on the same page, I’ll disclose what relationship, if any, I have with each writer.

I. The Piece: It’s time to appreciate Houston’s Disneyland: No more taking our grocery bounty for granted by Marene Gustine
The Opinion: How can you not like this piece? It rings so true. In fact, I echoed her exact same sentiments this week. Essentially, when I spend money, it’s usually on food. I don’t play golf. I have no desire to buy a boat. And going to The Gap lost its appeal after college. But d@mn, if I wouldn’t spend $20 a pound for a piece of fine fish (and no, that’s not code for something else). I love going to specialty stores for special items. Marene says it best, “Food shopping really is entertaining.”
The Relationship: Don’t know her. Never met her.

II. The Piece: Burns BBQ Makes a Comeback, Part 2 by J.C. Reid
The Opinion: J.C. tells a wonderful short story here, and I must say…it sucks that I no longer live in Houston. The intriguing new (new) Burns is only ten minutes from my former residence. I wasn’t overly impressed with the new (old) Burns on Shepherd. It did not fare so well in The Mighty Rib Crawl. That’s not to say the place sucked, it just disappointed our group on that particular day. Back to J.C.’s article. This piece once again verifies his bbq knowledge, while at the same time being extremely informative about the details of the new restaurant.
The Relationship: FB Friends/Twitter (but just a contact). Don’t know him. Never met him.

III. The Piece: UPDATE: Delicious Concepts Responds to Dei Maggi’s Dragon Bowl Departure and Accusations by Amber Ambrose
The Opinion: Ambrose (aka Scoop) is on this sh*t. Raise your hand if this whole Dragon Bowl fiasco doesn’t at least intrigue you. Kudos to Amber for getting the initial story out there and then for this follow-up report. The news sucks (when doesn’t it?), but props for some excellent coverage on the topic.
The Relationship: We are friends.

IV. The Piece: Bootsie’s Heritage Cafe to Close, Leaving Tomball for Houston by Katharine Shilcutt
The Opinion: Articles on Randy Rucker bring the noise and the funk.  The dude is the human equivalent to writing about burgers in Houston. Commenters come out of the woodwork. Katharine does a nice job with this article’s layout. She takes a quick jab in the intro, then dispenses with the facts. Per usual, the story is well written, but I do take issue with a few generalities toward the end. Example: “Some locals weren’t as receptive to his ever-changing menu”. This may be true, but how does she know? A direct quote would have been nice. But that’s being slightly picky on my part.
The Relationship: I blogged with HP. I’ve met her maybe a handful of times. 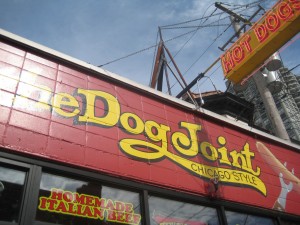 V. The Piece: Taste of Chicago… Da Dogs, Da Italian Beefs and Da Pizzas in Houston? by Jack Tyler
The Opinion: If you have any connection with Chicago/Houston, this one is a must-read.  Jack breaks it down in this lengthy, yet very interesting post.  I particularly enjoyed the part about James Coney Island. His exchange with one of the employees is classic.  I happen to hate JCI, and felt it just didn’t stack up to my one-time true Chicago hot dog experience.  And don’t even get me started on their awful fries! Major props to Jack, I’m sure this post took forever to construct.
The Relationship: Don’t know him. Never met him.

Love these pie hole posts. That is all.

SirRon…I added the new feature below the comment box so you can be notified. Test it out, please let me know if it works.