We are constantly on the prowl for cool products, promotions, and events. Special thanks to Mike for covering this event.

It’s summer in Texas, when temperatures routinely soar into triple digits with humidity to match. But the outside temperatures aren’t the only think that can scorch, as ten local chefs sought to prove as they battled it out for the title of best curry dish at the First Annual Curry Crawl.

Held recently at Straits in City Centre and benefitting St. Luke’s Hospital’s New Young Professionals Group, the event didn’t disappoint on its promise to deliver a kick. A packed crowd sampled dishes ranging from Dry Curried Prawn on coconut cilantro rice (Chef Mary Cuclis of Pondicheri) to Barbeque Curried Pork to Octopus with chimichurri and green Thai curry sauces and a Pisco Sour (Chef David Guerrero from Samba Grille). Cocktails were provided by Grey Goose, a welcome distraction from the heat outside and in the competition.

I like curry, and Indian, Thai and other Asian cuisines. But I tend to be picky so I’ll admit I came into this with low expectations. Boy was I wrong. What I discovered was food that was adventurous and challenging, and hands down delicious.

First up were Mussels with Thai green curry, and a Foie Gras & Curry Cotton Candy from Chef Phillip Speer of Uchi. I’m not normally a fan of mussels, but this dish was unbelievably light and refreshing. Their new Houston location in Montrose is generating lots of buzz and if this dish is any indication, it’s well deserved.

Next, we moved on to a Tandoori Halibut with watermelon curry from Chef Kiran Verma of Kiran’s. This was another dish that was surprisingly light, and the halibut was cooked perfectly. With dishes this good already, it was going to be difficult to pick the best from a loaded field.

Every dish we tried was a winner in its own way, but for me it was tough to beat the Spiced Lamb Chop from Chef John Sikhatanna of Straits and the Barbeque Curried Pork with cucumber and red onion on flatbread from Chef Junnajet Hurapan of Blu. 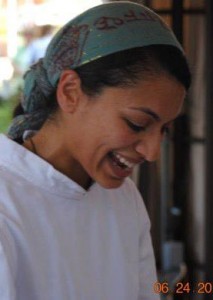 Chef Patel of The Queen Vic

But the dish that was able to do that for me was the Crab Ball served atop Goan curry with raita from Chef Shiva Patel from The Queen Vic. It was a perfect dish for me, with a delicate balance between spicy, sweet and creamy on full display.

And both the judges and patrons agreed with me, as Chef Patel took home the top prize from both groups. Chef Guerrero’s octopus dish came in second.

I’m already looking forward to next year’s event, in anticipation that the field gets larger and the cuisine becomes even more creative. But it’ll be tough the beat the inaugural crawl.

*Note, TMR was given a complementary pass to cover this event. All opinions are those of the writer.

And I forgot to mention that I sweated curry for 3 days afterwards.

Sounds delicious!! Wish I could have been in attendance! Mighty Rib, great to see you back in action!!

A big food add here..!! I actually impressed to get this post article. Knowing about Houston’s First Annual Curry Crawl I am so impressed. A big thank for sharing this post. Keep it up…