What Ales You?: Shiner Hefeweizen‏

Monthly Feature
Wayne and Leah gives us the full rundown on a selected brew.

Greetings faithful Mighty Rib Readers, not sure where you are reading from, but here in lovely NOVA (Northern Virginia), spring has broke and temperatures are up. As I’m sure we all know, wheat harvest time isn’t until June or July, however, with the warming of the weather, nothing sounds better than a good refreshing wheat beer. We were in the store the other day, and noticed an unfamiliar site to NOVA, but familiar to us when we were back in Texas. We found Shiner at the store! However, this was Shiner Hefeweizen. We figured that this would be perfect, a wheat beer for the spring from an old Tex favorite, Shiner.

Overall Taste/Wayne’s Take
I had my Shiner Hefeweizen last Saturday, under sunny skies and warm temperatures, a good departure from the frigid winter. It was the warmest day thus far, perfect to drink a wheat beer. I sat down to catch the Washington Capitals deciding game in the first round of the NHL playoffs, propped open the back door to let the nice warm outside air in and took my first sip. Now I have experience with other wheats, since this isn’t a review on the wheat competitors, I will only say that there are others that are better than Shiner Hef, but, with that said, Shiner’s version was still pretty solid. I popped the top on the Shiner Hef, first whiff was a faintly sour, not in a bad way sour, but in a pleasantly sour way. I poured into a cold mug and can only describe the color of the Hef as a cloudy golden color, like a sunbeam on a misty morning……wow, did i just say that? It’s true though a very pleasant color. The first swig, like the first smell had a nice hint of sour to it. Not too hoppy, not too strong, but just right an easy drink. The immediate sour was followed by a nice bitter as it flooded my tongue. Going down the ole gullet, it retained the bitter, and left a slightly bitter aftertaste, but not too bad. I will stress again, that this was a solid Hef, not the best but pretty good. Maybe it was the great weather on the day I tried it, but I would surely suggest it on a mild, sunny, balmy spring day.

Overall Taste/Leah’s Take
Shiner Hef is cloudy with a light goldish color, and generally looks and smells pretty much like every other wheat beer I’ve had. I’m a big fan on wheat beers in general and this one does not disappoint. The taste is nice and light with some deeper notes that are a bit malty, though Shiner Hef slightly more bitter than some other wheats out there. It pairs nicely with a citrus wedge of some sort. Part of me really wanted to choose lime for my tasting since it seems more Texas-ish but I went for the traditional route. I would certainly ask Wayne to pick up another six pack in the coming months, because I agree that you can’t beat a Hefeweizen when it gets warm… lemonade for grownups.

Meal Pairing/Wayne’s Take
I think that this beer could go with many things. It’s light enough to complement a heavier meal, but also, the taste wouldn’t overpower a lighter meal. Since it was so springy when i drank it, I would pair it with a light meal. I would pair this beer with a simple light meal, maybe a lightly marinated and grilled chicken breast with a mixed veggie side. I don’t know that a traditionalist would make of this pairing, but it would be a decent match for my palate.

Meal Pairing/Leah’s Take
Given the natural complimentary nature of wheat beer and citrus, I would pair Shiner Hef with a nice orange or lemon chicken from my favorite Chinese take out… (which is less than a mile away, by the way) The sweetness and richness of orange chicken would be a nice contrast to the light and faintly bitter taste of Shiner Hef, and a second Shiner Hef would be a great palate cleanser after the meal! 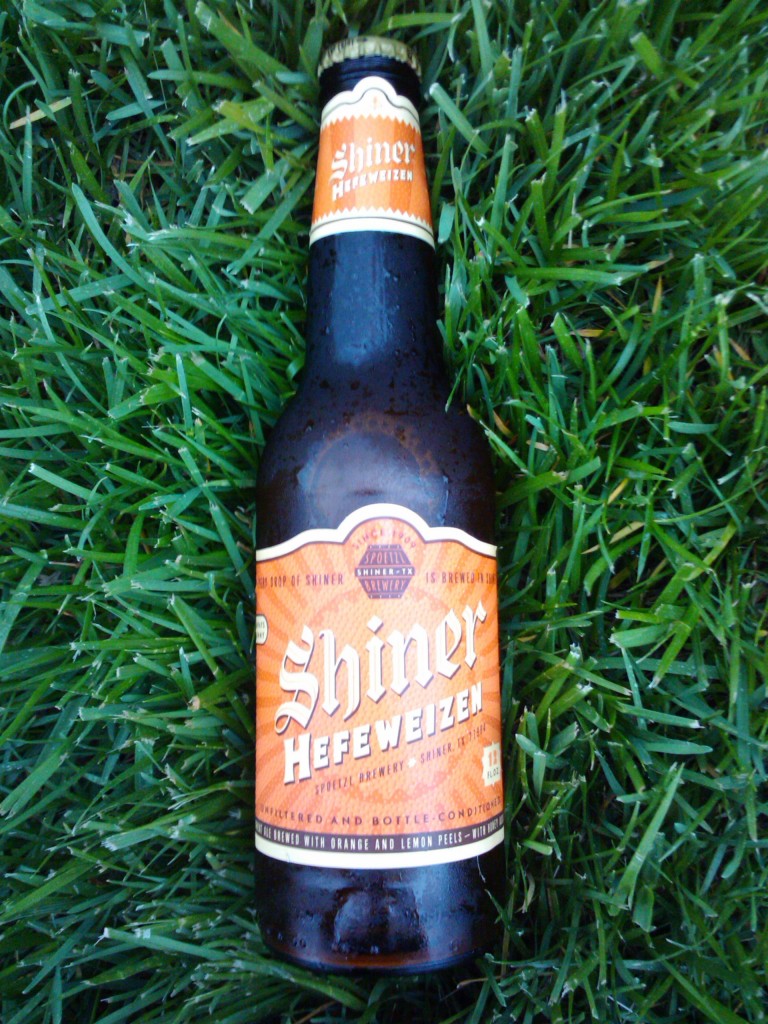 O.K. Mighty Rib Readers, another positive review from Wayne and Leah, help welcome in Spring with a nice, lighty, tasty, balmy, spring Shiner Hefeweizen. Just don’t try to open your own lemonade for grownups stand…there are apparently laws in some states.

Previous Post Basically, I Cook: Meatballs
Next Post You Are What You Eat: It's National Grilled Cheese Month. Rats.