What Ales You?: Piraat Ale

Monthly Feature
Wayne and Leah bring you their monthly take on beer.

Arghhhhh MIghty Rib Readers Argghhhhh. This month we reviewed an ale called Piraat Ale from Belgium. An ale is a beer brewed with malted barley and fermented at a warmer temperature. The warmer fermentation will produce a variety of flavors, mostly fruity in taste and smell. Piraat is more closely associated with a pale ale. From what I understand pale ales are naturally lighter in color, but this comes from the malt being mixed and dried with a component called Coke (not the soft drink). Neither Leah nor myself are huge fans of pale ales, so this was an interesting beer to try. Hopefully, we could overcome our general distaste of pales.

Overall Taste: Wayne’s Take
I poured my Piraat into a mug and noted that it had a golden color, and a slight head, however the thermosphere remained foggy for quite some time. Took a sniff and must say, that it did have a really pleasant smell. Not too yeasty/hoppy, but with a faint floral and fruity hint. I took my first sip and I did detect a slight floral hint, however, it was quickly overpowered with bitter. I have had bitter beers before, and Piraat was not the most bitter I have had, however, it was surprising after the delicate and delicious bouquet. Also, Piraat left the bitter after taste for quite some time, which I might call unpleasant if the beer itself were even more bitter. It was tolerable, the aftertaste, but only because the product itself was only slightly bitter. 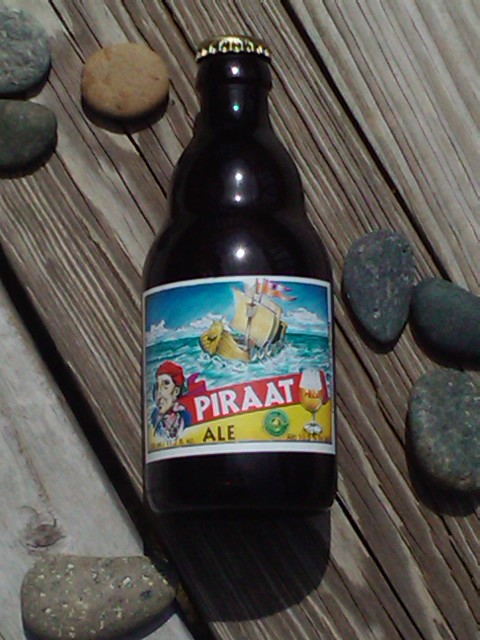 Overall Taste: Leah’s Take
This is a nice strong but not too dark European-ey beer, and tastes even better when served out of a cute beer goblet. I thought it was clearly hoppy and malty when I first sipped it, and these flavors did not become more subdued as I continued to drink. For myself, Piraat is a nice before or during dinner drink, but its a bit too assertive to enjoy more than one bottle in an evening.

Meal Pairing: Wayne’s Take
Yes, yes, it would be easier to pair the Piraat, with a meal that a Pirate would eat while at sea, say seafood? However, I am going to guess that the Pirate might enjoy a Piraat while on shore leave. That said, I would pair a Piraat with a nice Pork Chiffon. What is a Pork Chiffon you might ask? I have no idea, it just sounded kind of silly and made it up right now. Seriously, I think that Piraat would go with a nicely grilled pork chop or pork dish of some sort. Typically, pork has a nice flavor and is quite light, which would be a good pairing for the bittery Piraat. Maybe even a Hawaiin inspired pork chop, after sniffing the floraly fruity bouquet of the Piraat, even though the following taste has very little of that quality, it might be nice to have a fruity pineappley taste of a H-Chop to accompany the bittery Piraat.

Meal Paring: Leah’s Take
I’d think land lover food would be an injustice to Piraat. I would pair a nice glass of Piraat with some beer or tempura battered shrimp and like a pound of hushpuppies. The mildly sweet briny taste of the shrimp and the heavy greasy carbs of the hushpuppies would contrast beautifully with the robust hoppy flavor of Piraat. If you ate enough of the hushpuppies, you might be able to try that second glass, too.

There it is Rib Readers, Piraat Ale, great smell, with some bitterness dependent on the drinker. Great label and decent to slightly below average brew….in Wayne and Leah’s opinion.

Though Piraat is an ale that’s pale in color, do not confuse it with hoppy pale ales like APAs or IPAs – Piraat is a Belgian Strong Ale. Beers in this category are only moderately hoppy at best. I believe you are confusing a potent alcohol burn and spicy yeast strain with hops. Drink Piraat and compare it to a Green Flash West Coast or Sierra Nevada Pale Ale and you will notice it has very little in common with APAs or IPAs – the latter two are far hoppier.