Monthly Feature
Wayne and Leah bring you their monthly take on beer!

Greetings TMR readers! Leah and I would like to apologize for missing our June entry, we will try to give you a double dip this month. June was an incredibly busy month for us, but we did drink beer(s)! One of the reasons we were busy, is that we had out of town company. That company………..the writer, blogger extraordinaire, food critiquer, executive producer, director, mastermind of this very blog; Mr. Kevin Shalin. Kevin and his family stayed with us for a couple of days during their journey to Boston. During that time, we went to the Lost Dog Cafe, a and while there did a review of a beer. That beer? Clipper City Smallcraft Warning Pilsner. So see below, our take. 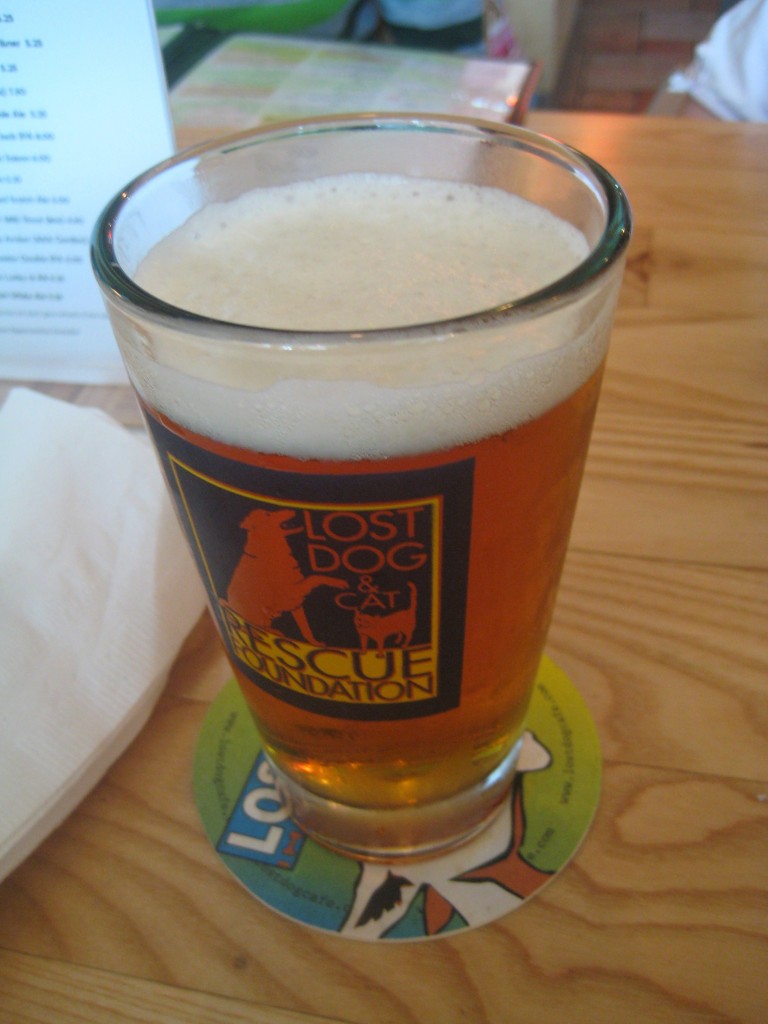 Overall Taste
Kevin’s Take
No offense to the fine people who brew Clipper City Smallcraft Warning Pilsner, but this beer reminded me of slightly chilled cat piss. I thought the temp was off, but I guess this was more of a restaurant problem, than a beer maker error. But then again, certain beers need to be served at certain temps, so…who am I to say? The fact remained, cold or slightly chilled, this beer was just not for me. It had a funky, unpleasing after taste that made me want to totally switch gears and order a root beer. So, I did. That too needed to be a few degrees colder, but it was quite tasty nonetheless. I’ve had worse beers than Clipper City. It just wasn’t my style.

Wayne’s Take
I might be a little stuck on this one Clipper City wasn’t my favorite, that is for sure, but I’m not sure disliked it as much as Kevin. It’s called a Pilsner, but wasn’t quite as golden colored as other pilsners that I have seen. It was a little bit more orangey in color. Decent sized head and judging from the color of the head, maybe a brownish tint to the foam, I could tell it was going to be malty tasting. The first sip contained a decent amount of malty/hoppy taste, surely not the most excessively malty or hoppy I have had, but enough, however, it was the aftertaste, for me that was a little difficult. Very yeasty, yeasty yeasty aftertaste, too much for me in fact. In summary, a passable beer, slightly too much malty flavor, with a worse aftertaste

Leah’s Take
I had no problem with Clipper City- It was light enough to enjoy with a meal without taking it over but had a distinctive flavor. I agree with Kevin about the temp, if a beer is a pale shade I usually like it very chilly. This is one that I could enjoy more than one glass of, though I don’t think I would work very hard to find it. 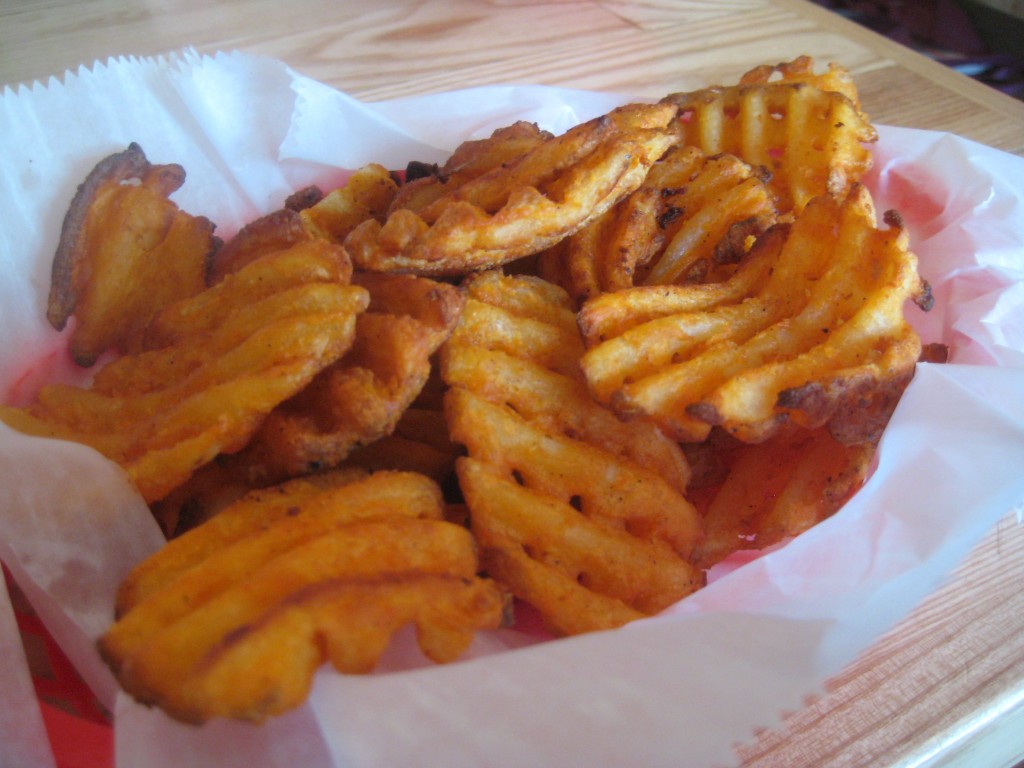 Meal Pairing
Kevin’s Take
The Lost Dog Café has 53 specialty sandwiches on their menu. 53!!! I went with #2…Billy’s Philly. This was like a regular Philly cheese steak, but with chicken. I’d like to say the beer complimented this fine sandwich, but happily, I consumed it before ordering food, and wasn’t about to ruin my meal with cat piss. The root beer was a perfect substitute. The sandwich was good, borderline great. If I ever go back, I’d probably choose something else. There are just too many options. What stood out about my meal was the $3 basket of seasoned waffle fries. Un-f-ing-believable! Think Chick-fil-a…but much, much better. Golden, perfectly crisp, and dosed with seasoning. If you are in the WDC-area, The Lost Dog Café is a no-brainer stop. The relaxed atmosphere, delicious food, and overwhelming beer selection that would make a raging alcoholic’s knees buckle, proved to be a winning combination.

Wayne’s Take
As Kevin previously mentioned there are SO MANY sandwiches to choose from at Lost Dog, it’s hard to pick. I have been to Lost Dog several times and have tried a different sandwich each of those times. In my opinion, there is some risk for a place to have such a large menu, but when it’s all sandwiches and pizza and you do those well, I guess they want people to have to choose and then take their alternate pick at their next visit. I chose Number 19 on the Sandwich menu, The Balboa, which contains tomato sauce, genoa salami, hickory ham, pepperoni, mozzerella, onions and oregano. I still had some of my Clipper City when the meal came and must say that while I didn’t dislike Clipper City as much as Kevin, I still didn’t think it went well with this meal. My first bite of the balboa was a disappointment, it wasn’t bad, but it was missing something. However, upon taking my second bite and every bite thereafter, that missing something proved to be the oregano. I guess the kitchen missed the end of the sandwich I started on. Once the oregano was mixed into bits, the Balboa becam an excellent sandwich. Again, the sandwiches are so tasty at Lost Dog, its worth a visit. Also, the beer selection is great, and while the Balboa was quite tasty, I figure the yeasty after taste and bouquet of Clipper City wasn’t the right combo for the sammy that I had. 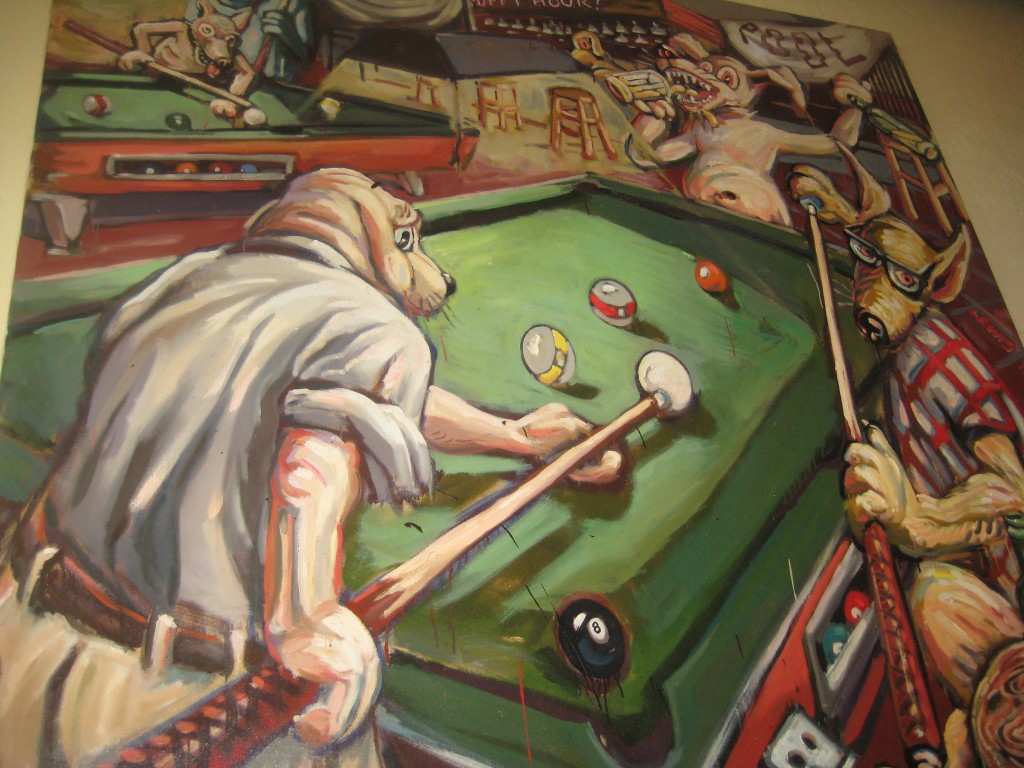 Leah’s Take
I decided to go with pizza during our Lost Dog visit, though a non-traditional one. I enjoyed the very decadant Burro Pizza, which was a nice chewy wheat crust with refried beans serving as the “sauce” and basically a ton of cheese, topped with diced tomatos onions etc. I don’t know how one could possibly go wrong with that combo, so maybe it goes without saying it was good, but I’ll say it anyway- it was good. It tasted great with the Clipper City and the wheat crust made it seem more healthy than it probably was.

There you are TMR readers; Clipper City Small Craft Warning, 1 out of 3 of us seemed to like this beer, but go try one for yourself. If you ever find yourself in the Washington D.C. region, definitely go to The Lost Dog, the food is very good and if you’re an animal lover, the Lost Dog Foundation, helps find homes for homeless dogs and cats. There are several locations now in the D.C. area, so stop by, great food, cutesy family friendly environs. It’s a winner to us.

SO jealous…The Lost Dog was one of my favorite spots when I lived in Arlington. I love, love, love that place!

Please tell me you’ve eaten those fries Carrie! Just look at them!!!