My random thoughts…brought to you once a week!

Over the course of the next few weeks, we’ll be counting down my Top 25 Favorite Bites from the past year. Sorry non-Houston readers, I’m keeping this list strictly in H-Town. Here we go:

25. benjy’s on Washington: Grouper Sashimi
I consumed this dish about a month ago during a Chef Chat interview for Houston Press. Have you seen a more beautiful plate? I haven’t…and here’s the best part…it tasted even better! The olive oil and delicate fish make this sashimi such a winner. I won’t lie, it’s not going to fill you up, but still memorable.

24. Houston’s (now called Hillstone’s): Veggie Burger
I never, ever thought a veggie burger would make my top 25, but here we are. I found this through fellow Mighty Rib blogger Molly. I had to do a Food Fight post for Eating Our Words, so I went to Molly for a good veggie burger suggestion. Without hesitation, she said Houston’s. Damn, was she right! “This is a tasty burger”–Samuel L. The diced beets give it a sweetness, while also providing for a medium-rare look.

23. Hollywood Vietnamese: Egg Rolls
Thanks go out to the ever popular Eating Our Words reader Fatty FatBastard. He recommended Hollywood for their Vietnamese egg rolls. He was spot on. I’ve never had a bad Vietnamese egg roll. In fact, I could probably eat one topped with a shit cream sauce. But these are even more special than the norm. Why? The chewy, yet crispy wrapper. Get them!

22. Esther’s: Sweet Potatoes
I found Esther’s on my first restaurant assignment for Eating Our Words. Glad I did. These are the best sweet potatoes in the city. They were super soft, but held their chunky form, and the level of sweetness was just spectacular. Get a massive order of these to-go for Thanksgiving, and remember who told you.

Three Brothers on the left 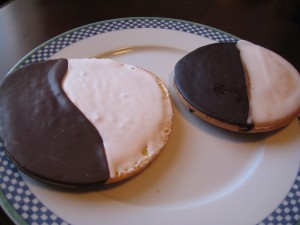 21. Three Brother’s Bakery: Black and White Cookie
For some strange reason, I just wanted to do a Food Fight with Black and White Cookies. Three Brother’s version kicked the ever-loving crap out of Katz’s. It wasn’t even close. Speaking of not close…Three Brother’s…why must you be across town from my home? Probably a good thing. Each cookie could feed three people. Get a small box of these things, cut them in half (to include each side), invite some close friends over, brew some coffee, and call it an evening.

you only gave us 21-25 and i’m already totally into this list. can’t wait to see the rest.

Now what fun would that be if I gave you all 25 at once? Gotta leave a little intrigue. SirRon, give me 5 good dishes you’ve had this year. Or, if you prefer, 5 good beers.

Kevin: We are honored to have made it into your top 25! Thank you so very much. I like the intrigue to see the next batch…
Janice Jucker

I’d pay rent to live in your bakery:)

OMG. If I ever got my hands on THAT cookie, the last thing I would do is share it.

Can’t wait to see the rest of the list!!!

Glad to see the Houston’s veggie burger made the list!