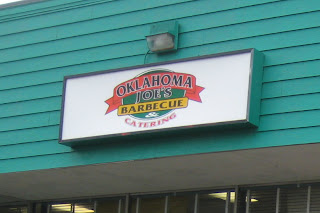 My numero uno…Anthony Bourdain’s #13…IN THE WORLD! That’s right…the great foodie has Kansas City’s Oklahoma Joe’s on his “Places to Eat Before You Die” list. Celeb opinions usually mean nothing to me, but the man got it right on this one. My favorite restaurant ever is actually located inside a gas station. Don’t worry, it’s clean with plenty of tables. Plus, if you order more than $20 worth of meat, you get 3 cents off each gallon of gas (just kidding). The reviews said to get there early or be prepared to stand in line. Arrived at 10:30 for an 11 o’clock opening. Okay, in fairness, our plane was a little early and we had nothing else to do. Spent the down time in the parking lot inhaling the sweet BBQ fumes. Never before have I gotten full off oxygen. Eleven o’clock came and it was time for the real deal…authentic Kansas City ribs. Although, this didn’t stop me from ordering a pound of sliced brisket…and the meal came with some delicious, seasoned fries. The half-slab of ribs were beautiful…like something out of a magazine. Big, thick, just the right amount of fat, and unreal tenderness (don’t worry, I’m still talking about BBQ…although I think I have a legitimate problem). Their homemade sauce had a perfect level of spiciness. The brisket was the best I’ve ever eaten, but the star of the show was definitely the ribs. I’ve lived in Texas my entire life. No offense, but OK Joe’s far exceeds any Texas BBQ I’ve eaten. Texas loves BBQ…in Kansas City, it’s a way of life. To be honest, I’m not that big a BBQ eater. It’s typically not my thing, which makes it even more amazing it’s on my list…much less #1. I’ve given Sara permission to fly me up to KC if/when I make it to 85. I want to gum down half a slab and have her knock me over the head with a bottle of BBQ sauce. I figure it will be a short trip to heaven since I’m already there.

Eating OK Joe’s ribs, along with a little motivation from Sara, were my inspirations for starting this blog. I emailed my friend Stephanie a week before our Kansas City trip. She led me to Ok. Joe’s. That’s the essence of this blog …interaction/sharing ideas/opinions. It’s all about finding the next Mighty Rib.