I’ve decided to start a new journey here with The Mighty Rib, we’ll see how it goes. I’m still trying to figure out the details of exactly what this new piece will be…thus the either/or name. Originally, I thought this monthly piece would be called “Executive Lunch” and that I’d use my lunch hour to experience the finer restaurants in Houston offering a fixed menu at the noon hour, or rather an executive lunch menu. But, right off the bat I went to a finer restaurant and was dismayed to find that they didn’t actually have an executive lunch menu.

So I improvised, and thus the idea for “The Long Lunch” was born. I guess it is a safe bet to say you’re going to see a little bit of both over the coming months. Incidentally, this is also helping me work on one of my New Year’s resolutions: eating lunch at my desk less. Yes, I’m one of those.

For my first attempt at getting away from my office to have a lunch that I could actually write about, I grabbed a couple of co-workers, hit the door, and headed to one of Houston’s latest and greatest eateries: Haven. I’d been dying to try Haven and this was the perfect reason. I did think they had an actual executive lunch menu, so I was slightly disappointed to find out they didn’t once we were seated and I actually had the menu in hand, but luckily, that’s where the disappointment stopped.

The long lunch began with a very delicious roasted broccoli soup. I had been hearing raves about their soups, and while I’m not a huge soup person, I figured a few extra vegetables never hurt anyone. This soup was fantastic; I had slightly feared chunks of broccoli stalk, but the soup was a perfect puree and possibly one of the prettier shades of green I have ever seen. Smooth as silk and not a drop was left behind.

I was feeling the call of the ocean, and couldn’t resist the fish of the day—tile fish. I had never even heard of tile fish, much less tasted it, and I was intrigued. I could not have been happier about this choice. Honestly, when I first heard the day’s selection was tile fish, a certain visual popped into my head, and I literally envisioned a piece of fish on a tile, like maybe they hadn’t meant the name of the fish was tile, but rather that tile was just a reference to serving method. As soon as the dish arrived I felt silly for ever thinking as much. The fish was a perfect flaky white, cooked just right. The bed of wilted/sauteed greens it was served on (not tile) was equally delicious. Absolutely fabulous, a dish that will likely find me heading to Haven quite often. I just hope tile isn’t seasonal!! If it is, I guess I’ll just have try something else because there were definitely some other entrees catching my eye. The daily blue plate specials would certainly be worth a second trip very soon–I’m shooting for Thursday. 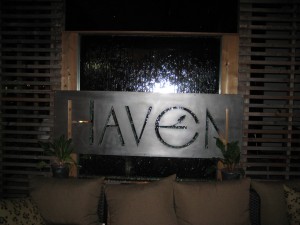 And just when I thought this might be the end of the long lunch…we stretched it out a bit further and went for dessert. So glad we did. In an ongoing effort to be healthy(-ish), I let my skinny jeans do the choosing and I went with the Ambrosia–mixed fruit served with coconut and lemon curd. It was perfect. I’d order it again in a heartbeat, unless of course my sweatpants decide to do the talking next time, in which case I will 100% get the Mexican Coke float with the Jack Daniel’s ice cream. I’m not even sure how I avoided it this time, next time I know I will not escape.

Haven is definitely a new favorite for me. Give it a try, I think you’ll feel the same.