Let me start off by saying that I am no gumbo expert. I rarely eat it, and when I do, I am very particular in what I like. In short, gumbo is a highly subjective food item … some would say in the realm of burgers and pizza. The other day, a friend reached out to me, asking if I would conduct a blind taste-tasting on gumbo. He was making some chicken and sausage gumbo at home and wanted to compare his version to some of the other restaurants around town. It took me about 2 seconds to agree to it. Below, I’ve tried to spell out as many details surrounding the tasting, followed by a best-to-worst rundown of each gumbo, graded on overall taste on a scale of 1-10 (1 = terrible, 10 = outstanding) . Here we go…

-5 gumbos were sampled (home cook, J. Gumbo’s, Capital Bar and Grill, Maddie’s Place, Boudreaux’s)
-All gumbo was chicken and sausage (My friend has a strong aversion to shellfish, and since this thing was his idea, it’s his rules.)
-It was mostly blind taste-testing (I picked up the gumbo at Boudreaux’s, and had them put it in a to-go container, but realized I forgot to ask them to keep the rice separate from the gumbo. The other 4 gumbos were purchased or prepared by my friend and completely blind to me.)
-Each gumbo was purchased from the restaurant, taken home, and refrigerated. They were then reheated to precisely 160 degrees via sous vide.
-Each gumbo was numbered and plated in a small bowl as well as a small plate.
-The only sampled gumbo that I had previously eaten was Maddie’s Place, and that was well over a year ago, if not longer.)
-I sampled each gumbo, followed by a Miller Lite palette cleanser.

Here are the results… 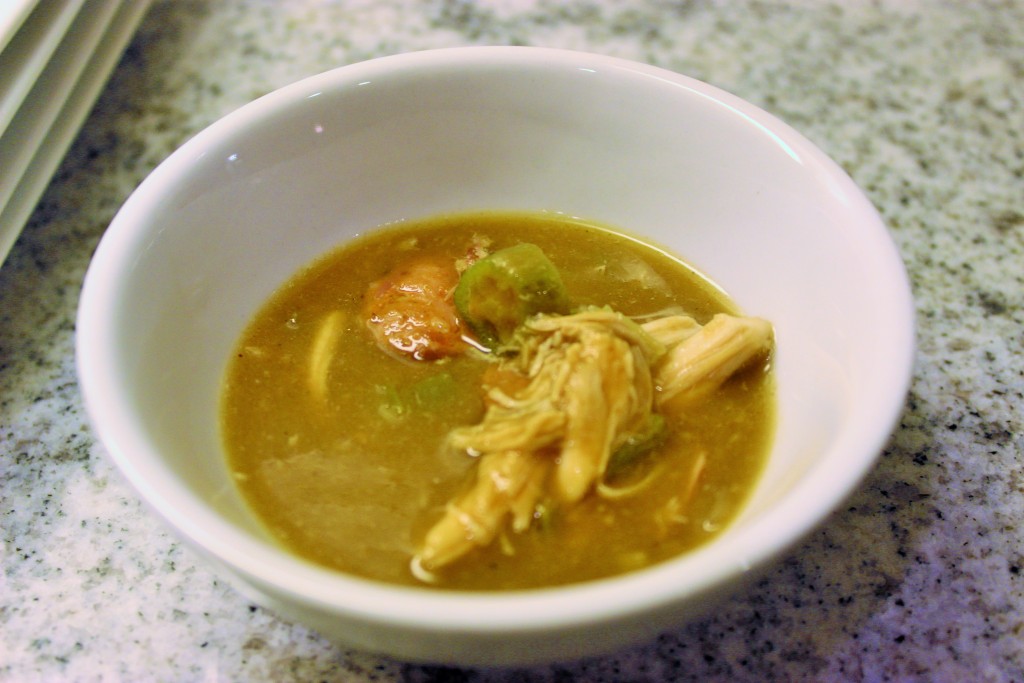 #1 Home Cook (9.0)
Overall, this was just an outstanding gumbo. I favor a more golden roux and this one was just that. Highlights included: a sizeable portion of tender, shredded chicken, perfectly cooked sausage, an ample amount of okra, and a consistency of the base that was neither thick, nor runny. It was just right. I also enjoyed the subtle heat that came with each bite. This gumbo was heads and shoulders above the competition. After the results, I was informed this was the second time “home cook” had ever made gumbo. 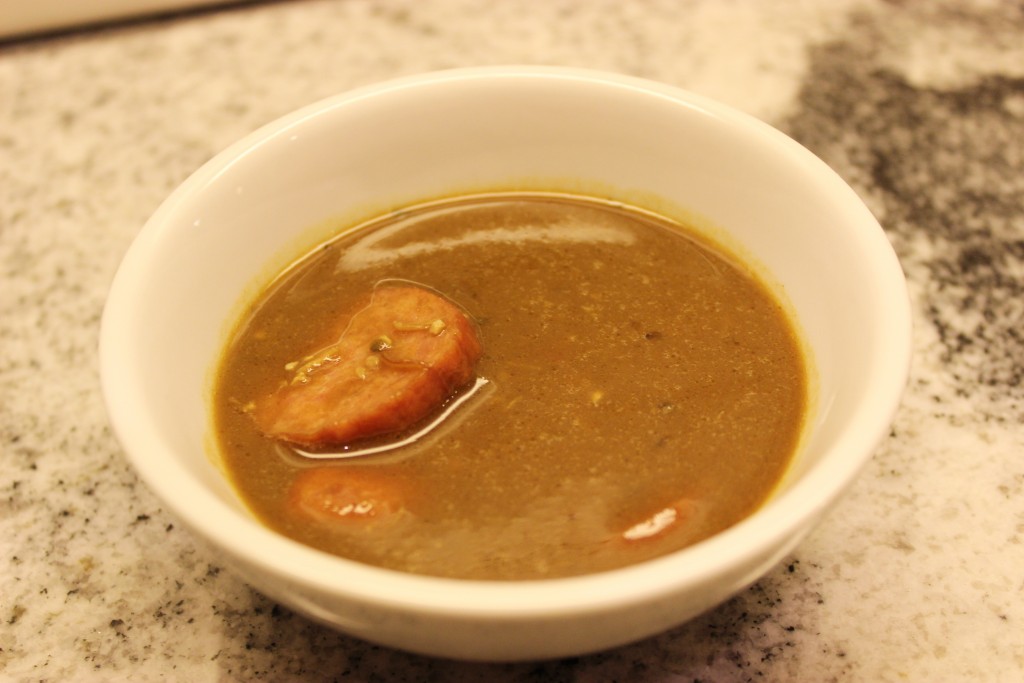 #2 J. Gumbo’s (7.0)
This one was a Solid 7 all the way around. The roux was dark, super rich, and just a notch above soupy. The sausage was left in big, round pieces which weren’t dried out. No onions or celery were detected, which was a bit of a negative for me. The roux was slightly bitter, but other than that, this was a very traditional gumbo and one I wouldn’t hesitate to go out and purchase. 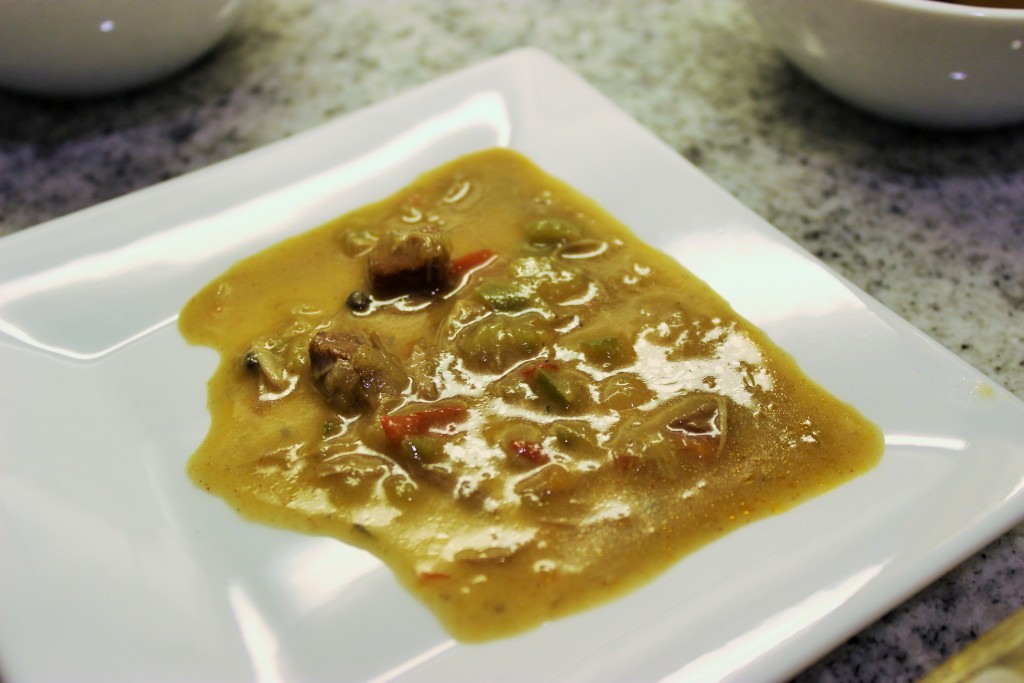 #3 Capital Bar and Grill (6.5)
I had a very difficult time choosing which was better between this one and J Gumbo’s. In the end, CBG’s version had many positives, but a few more detractions, including: a lack of both duck and sausage, a slightly oily base, and a lack of spice. I loved the color and consistency of this gumbo, but it just didn’t have a flavor that really made me want to embrace it. *Note: only gumbo to include duck. 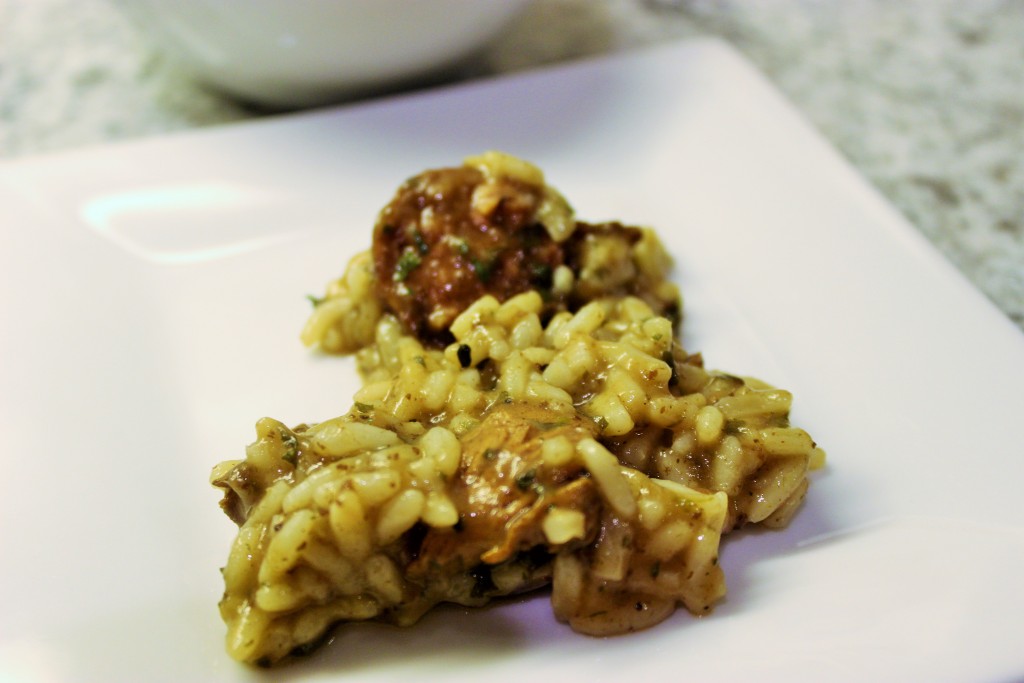 #4 Boudreaux’s (4.0)
Some will say that this competition isn’t truly apples-to-apples because the Boudreaux’s sampling included rice. That’s fair. But the bottom line is this … rice or no rice, this gumbo was woefully bland. And it was served with too much rice. It really felt like I was eating a rice dish with a little gumbo in it. A decent amount of tasty sausage was about the only thing that saved this well below average gumbo.

#5 Maddie’s Place (2.0)
This came as a complete shock to me. As stated above, I’ve eaten Maddie’s gumbo before. Hell, I’ve even highly recommended it. This version tasted and looked nothing like what I’ve previously eaten. It was thick, gloppy, and super peppery. Frankly, it didn’t look, nor taste like gumbo. The golden roux was nice, but included tomatoes, and again, was just way too thick. I love Maddie’s, and when things are rolling right, I believe it’s a top 5 restaurant in Little Rock. But this particular batch of gumbo didn’t reflect that.

Summation: We need better chicken and sausage gumbo in Little Rock. While it’s not really truly fair to compare a home cook’s version to a restaurant’s, this blind-tasting definitely drove home the fact that the gumbo coming out of these restaurants isn’t the type to make me do backflips.

We had the gumbo at Lost 40 last weekend and I thought it was much enjoyed it much more than Capital Bar and Grill’s version.

I really really enjoy the gumbo at Samantha’s. At $8 it’s one of the best deals you can get there and very filling. It is more than just chicken and sausage though, so those that have any problems with crab or shrimp probably won’t like this. But the broth is divine!