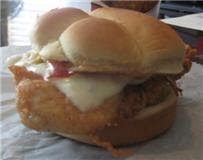 The Intro
Let me start out by saying that I consider myself a true fast food connoisseur. I spent the first 3 years after graduating college as a sales rep for a large gift-ware company. My territory was not as big as Texas but it sure felt like it was. I spent 5 days a week driving from small town to small town selling stuffed animals, scented candles and all the other knick-knack junk you give your mom on Mother’s Day. I frequented fast food drive-thrus at least twice a day, developing a palate for great fast food. I’ve had the good (Chick-fil-a) , the bad (Long John Silver’s) and the ugly (Taco Bell). After my stint as a teddy bear hawker, I moved on to bigger and better things in the job world. But I never lost my love of chowing down on a good burger, order of fries and ice cold Coke from the comfort of my car. Even now as a self-employed business owner, I would rather be served lunch from a drive-thru window than from an overly perky waiter. So when asked to write fast food reviews for The Mighty Rib, I was more than excited. I was downright stoked!

With that being said, here are the ground rules for my reviews.

First, I consider a restaurant a “fast food” restaurant if it meets at least one of the following criteria:
1. It has a drive-thru window.
2. You stand in line to place your order.
3. Tipping is not required, nor expected.

Second, I will review menu items that I have not yet tried. I’ll give you my first impression without any prejudice or predisposition.

Third, I’ll focus on both healthy and not-so-healthy choices. While fast food has had a long-standing reputation of grease, grease and more grease, many fast food eateries have done a good job of “beefing up” their menus with healthier choices. I’ll try to find the ones that don’t taste like cardboard.

With the ground rules laid, let’s get started.

KFC’s Doubilicious
There are very few fast food commercials that get my attention. As much as I love fast food, very rarely does the food you actually get ever look like the food featured in the commercials. So when the KFC Doublicious commercial came on, I was quite surprised when I actually stopped Facebooking long enough to watch the commercial. So what got my attention? Easy. Hawaiian sweet bread.

Not only does this new Doublicious feature the triple power punch of chicken breast, bacon and Swiss cheese, it goes even further by adding the deliciousness of a Hawaiian sweet bread bun. Put it all together, throw in a tasty sauce and you’ve got yourself a KFC Doublicious. For this review I decided to stay true to the roots of fast food and chose the crispy, Original Recipe chicken breast. For those wanting a healthier version, grilled chicken is also offered.

Overall taste (Scale of 1-10): 8
In a word? Yummy! I was really pulling for this sandwich and was not disappointed. The chicken breast was very juicy, well seasoned and didn’t leave a greasy aftertaste in my mouth. The Hawaiian sweet bread bun was soft, warm and really delicious. While the bacon wasn’t as crispy as I would have liked it, it wasn’t overly soft and chewy. I hate biting into a sandwich where the bacon falls out after I take a bite. The Dublicious had a sauce that blended very nicely with the other ingredients and wasn’t too overpowering. I would have liked had a bit more sauce but the juiciness of the chicken breast overcame the lack of moisture.

Visual Appeal (Scale of 1-10): 8
The Doublicious came in a box rather than a wrapper. Big plus. I always feel like sandwiches that come in a box are a bit more “fancy” than a regular, wrapper-wrapped sandwich. Call it a marketing ploy but it works with me every time.

The sandwich was larger than I expected, which was a nice surprise. The bun was big and fluffy. It smelled great and I took pictures quickly so I could take my first bite.

After Shock?
I can’t say I had any negative after effects. The Doublicious was big enough to satisfy my appetite but didn’t leave me feeling like I was walking around with a lead basketball in my gut. I was left with no funny aftertaste or other uncomfortable repercussions.

Would you eat it again?
Totally! But next time I’ll go for the grilled chicken breast and save myself 10 minutes on the treadmill. The Hawaiian sweet bread bun really made this sandwich a winner. The sweetness of the bread and the seasoning of the chicken was a great combination. Add bacon, Swiss cheese and that sauce (which I am now on a mission to figure out) and you’ve got yourself a fast food chicken sandwich that doesn’t taste like fast food.

Melissa, you mom would be proud.

Well-written and quite straightforward, I found it an interesting read. I really liked the "Aftershock" inclusion.

Keep it up; I look forward to your next article!

Totally agree…Melissa did an awesome job with this piece. I can't wait to read what item she tries next.

Now I want to try this doublilicious.
-Anna