Monthly Feature
Fatty usually covers one current fast food item. Not for this installment of The Junkie!

Pretty much since I can remember, I’ve always had to try out new items advertised at the fast food chains. Even if it is incredibly stupid, I still order it to see if I’m mistaken. (a cheese roll up, Taco Bell? Really?) Throughout the years there have been plenty of hits and misses – mostly misses. Occasionally, they’ll get one right and have something that you’d easily order again. Which is why I’m surprised that these chains haven’t gone to the ol’ internet and looked up web pages dedicated to old discontinued items from the past. It would be a win-win for both sides. Hell, if McDonald’s can keep bringing back the atrocious McRib abomination every year, surely these other companies can resurrect some old favorites. So, I thought back to jog some old memories and came up with the 10 discontinued fast food items that I feel need to make a comeback.

10. Burger King’s: Yumbo
I’ve gotta admit, I never even knew about the Yumbo until I started writing this, but there were enough Facebook pages on bringing this back, so I felt I should include it. Pretty simple concept: Ham and cheese on a hamburger bun. But so are a lot of great food items. This should be a no-brainer for them. I like the Yumbo name, too.

9. Jack in the Box’s: Patty Melt on Rye
Yes, I am fully aware That Jack in the Box has a similar variation with their “Sourdough Jack”. But Rye bread just seems like a healthier option, as the sourdough buns they use seem to be nearly deep-fried. Plus anyone who is anyone knows that a true patty melt should be made with Rye bread.

8. Long John Silver’s: Peg Leg
Back in the 70’s and 80’s, LJS pretty much branded the restaurant as pirate-themed. Just about every kid that walked in was greeted with their very own cardboard pirate hat. I don’t recall if they handed out eye patches, but I do recall the peg legs. They were simply fried chicken drumsticks, but were nonetheless still fantastic. I’ve always liked their batter more than other places anyway. Along with the crispies, this is one that would be great to see again.

7.  McDonald’s: McDLT
This was a great concept: Keep the lettuce and tomato cool, and keep the burger hot. It even had the awesomest container in the history of fast food. Sadly, I also think that container single-handedly caused the burger’s demise, as folks started to shun their Styrofoam containers. But I still think they should bring it back, if only so they can re-air the best Jason Alexander commercial… Ever! 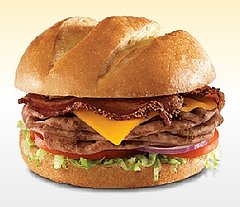 6. Arby’s: Roastburger
This sandwich wasn’t around long enough to have much of a following, but personally, I loved it. The trick was to get the all American and double the roast beef portion. It really did taste like some odd hybrid of an Arby’s sandwich and a hamburger. The fact that it had a line of Roastburgers introduced in 2009 that are already discontinued doesn’t bode well for its return though. Too bad. I think it could have developed its own cult following.

5. Wendy’s: Superbar
Back in the 80’s and 90’s, Wendy’s had a huge all-you-could-eat buffet in their restaurants, complete with a full salad bar, Italian pasta and pizza, and Mexican tacos and nachos. To a kid on a budget, this was Shangri-La. You could even make a frito pie, albeit with those awful beans that Wendy’s insists on putting in the chili. All of the food on it was average at best, but again, it was unlimited! I’m assuming that last part was why it ended up being removed in the late 90’s.

4. Whataburger’s: Steak Fajitas
Yes. Back around 10 years ago, Whataburger had Steak fajitas. They were delicious. The web pages have deduced that some Yankee infiltrated into the Corpus Christi Headquarters and immediately started sissifying the menu. My first hint of this was hearing “Hey Delilah” in Whataburger during my last visit. Whataburger needs to bring this back…like…yesterday. 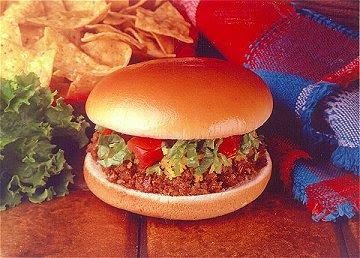 3. Taco Bell’s: Bell Beefer
Imagine a burger whose components are simply a couple of crispy taco fillings and you now know what the Bell Beefer was. It’s #3 on my list, but this far and away had the most fan pages for an item that has legions of fans. Come on TB. Is a bun distributor that difficult to locate? Step your game up!

2. Taco Bell’s: Cheesarito
This one bothers me not only because it was one of my favorite Taco Bell items growing up (along with the Meximelt) but also because Taco Bell still has every ingredient used to make them. All it was was a healthy amount of cheese with their Mexican Pizza sauce, topped with lettuce and green onion. The trick was to melt the cheese in the same oven that heats up the Meximelt. I can still occasionally find a Taco Bell that will still make this. If you can, I suggest you do. 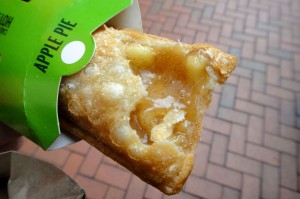 1. McDonald’s: Fried Apple Pie
Look, I know that whole “Supersize Me” documentary freaked them out, but switching from a fried apple pie to a baked one was just stupid. The frying was what made it so damn good in the first place! Nobody who goes to McDonald’s thinks a fried apple pie is healthy. (OK, most people?) But it should still be an option. Hardee’s loves to tout its nearly 1500 calorie burger. Nobody is asking you to do that, but bringing back an old favorite would sure be nice.

So those were my choices for menu items that would be great to see back on the menus, even if only for a limited time. This article was a lot of fun researching, so I’ll do more later down the line. Anyone have some items that I missed?

Do you remember when Taco Bell had a chicken caesar wrap? They put little crispy tortilla strips in it in place of croutons. It was GOOD! And also, whatever happened to Wendy’s chicken pita?

The Arby’s Roastburger is still around. I ate one last week.

Not according to their website. I’ll head to the one on Shepherd just to be sure, though.

Jim – I MISS the Wendy’s superbar! Bring that one back!!

I believe Fatty has the drive and determination to make that happen.

I’d forgotten how much I loved that hot apple pie from McD’s. It’s one of the few fast food items in ever liked.

I worked with Wendy’s Corporate back in the early 80s when the salad bar concept was just taking off. The official name was the Garden Spot, we insiders referred to it at Wendy’s G Spot.

McDonald’s in the state of Hawaii still do the fried apple pies. Not sure if it’s all of them, but I’ve definitely had one in the last year on Kauai, and I’ve had them before on Oahu. May be a worthy stop if you’re ever on vacation there.

Anyone remember the burger at Sonic that had the secret smoky sauce. I think it was called the number 3 burger. This was in the ’70s.

If you live in Houston, go get the Bellaire Broiler Burger with BBQ sauce and tell me what you think.

What if I told you I could get you half priced beef nachos at Fuddruckers ($3!) after 9PM every night, would that be something you would be interested in?

The Roastburger had a phenomenal TV commercial. It also tasted great. Good work!

Pingback: How to Barbeque

Hey, I think your site might be having browser compatibility issues.
When I look at your blog in Firefox, it looks fine but when opening
in Internet Explorer, it has some overlapping. I just wanted to give you a quick heads up!
Other then that, wonderful blog!

You guys don’t get the fried apple pie stateside anymore? I’m curious to see what the replacement is. I think Asia all over still sells those things as standard issue apple pie. And yeah, they’re pretty decent, especially coming from the super saver menu.