A couple of weeks ago I watched “The Founder,” a somewhat accurate account of how McDonald’s came to be as we know it today. Basically, McDonald’s began with two brothers (Dick and Mac McDonald) trying to make the best burgers in the fastest way; something that until then didn’t exist. Most burgers back then came from drive-in places, took twenty minutes to receive, and could typically be the wrong order altogether.

The story focuses on Ray Kroc, a down-and-out salesman who has struggled his entire life to find the next “best” thing. After he sees how well McDonald’s is doing, he begs the brothers to allow him to be their head franchisee. Eventually they allow it, and over the next twenty years Kroc figures out fairly deviant ways to own the company outright and, once he succeeds, he starts to cut corners to increase profitability. While McDonald’s is no doubt a successful business, and arguably one of the biggest American businesses in the world, it has certainly taken a beating over the past twenty years because of all of the cutting corner activities they did for so many years prior.

Due to this, McDonalds has been constantly trying to find new product ideas to bring in a new generation of customers. Most have been massive flops, from the Arch Deluxe to the Salad Shaker to the McLean Deluxe to the Big & Tasty, and so on and so on. I have to admire them for trying, but that chef’s test kitchen needs to be tweeked.

I bring all of this up because this week I decided to try their new Sriracha Mac Sauce. I’d say that McDonald’s comes up with a new sauce every couple of years, so this shouldn’t have been a big deal, but this time they were also adding it to two all new specialty sandwiches. I figured for that reason it was worth seeing if it was up to the hype.

First, I tried just the sauce with McNuggets. I felt this was the best way to start. Upon first try, it was familiar, yet odd. It does taste quite a bit like Big Mac sauce, but with a bit of a spicy punch. Not fantastic, but I did find it grew on me as I was dipping with the other familiar sauces. Definitely worth a try. 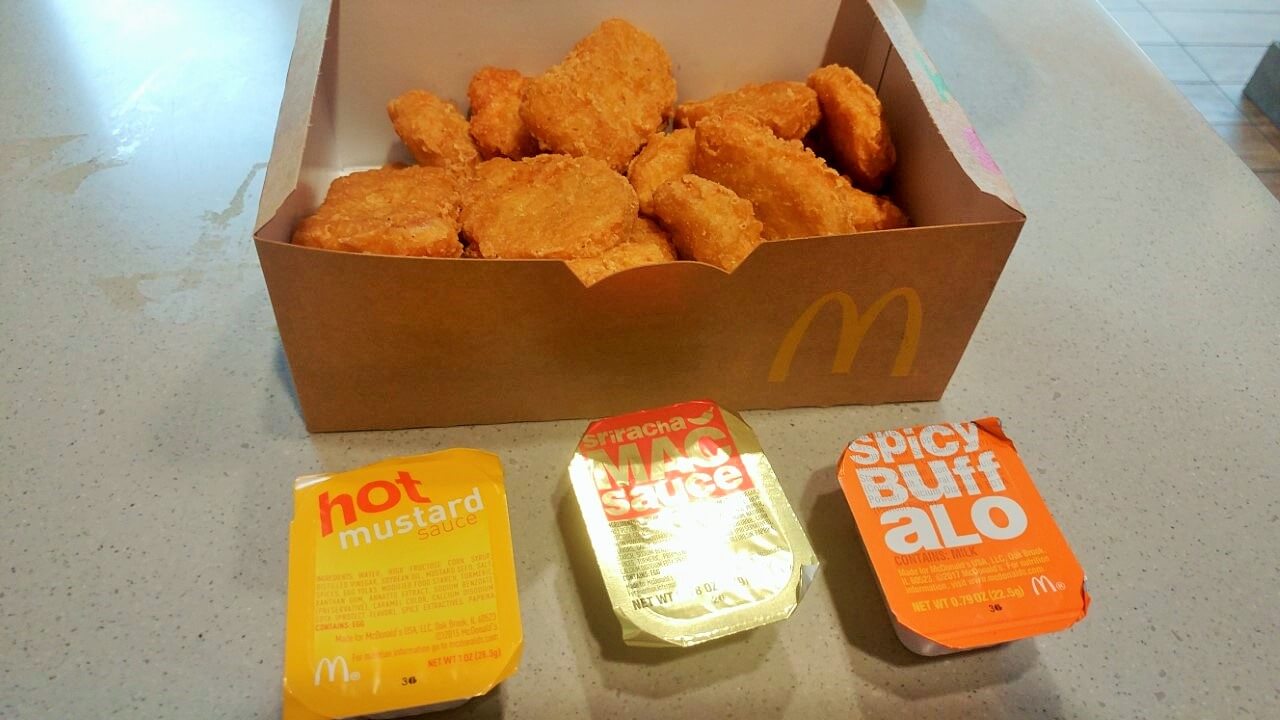 Next, I tried it on their new Sriracha Mac & Kale Burger. These new specialty items allow you to try optional buns, so I went with the Texas Toast. This sandwich was an abomination and in my opinion is the worst fast food sandwich I’ve ever had. McDonald’s beef patties have a great, bland, nostalgic taste that go quite well on a Big Mac or a Quarter Pounder with cheese. That said, they have absolutely no business being placed on anything deemed a “Specialty Sandwich.” And what the hell were they thinking when they thought adding kale would be a good idea. I sat there looking at the sandwich after every bite with bemusement. Who in their freakin’ mind thought this was a good burger?

Lastly, I tried it on their chicken sandwich. This time I knew better and ordered it on their classic bun. This sauce definitely works better with the chicken, which I found incredibly odd because it is ultimately a variation on their famous “Big Mac” sauce. All in all, it was a decent sandwich, but I’m probably not ordering it again.

Again, I actually applaud McDonald’s for trying new things. Innovation, after all, was what put the company on the map in the first place. I’d just really like to see them hire talent that was less “Michelin Star” and more like Dick and Mac McDonald. The world needs more vision and passion for the type of food these guys initially provided.

Previous Post When in Memphis: The Dirty Crow Inn
Next Post Taqueria Guadalajara Rivals Any Breakfast in Town