The Junkie: Jack in the Box’s Grilled Bourbon BBQ Sandwich 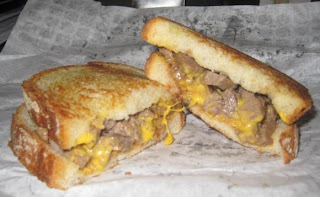 To be perfectly honest, I consider Jack in the Box to be a trendsetter in the fast food industry. Jack, in all his wisdom, gave fast food diners healthier options with the addition of salads to his menu. While keeping the good ‘ol fashioned hamburger available, Jack has delved into the realm of fajita pita pockets, teriyaki bowls, sourdough sandwiches and milkshakes made with (gasp!) real ice cream. Not food not typically found on a drive-thru restaurant’s list of fare.

I also give Jack big props for allowing patrons to order off the full menu at any time of the day. When I was pregnant, I craved meat. Specifically hamburgers. But only at “non-traditional hamburger eating” times of the day. Do you know how hard it is to find a hamburger at 8:30 in the morning? But thank goodness for Jack. I was there so often on my way into work that the drive-thru worker and I got to be friends. He was the most beautiful he/she I had ever seen. He would tell me stories about his pregnant sister who also craved weird things. I would question him about his favorite makeup application techniques. It was a match made in drive-thru heaven. I wonder if he ever got that sex change….

But I digress. Back to the point.

For this month’s fix, I frequented the new Jack in the Box down the street from my house in Katy. Upon driving up to the big board o’ deliciousness, I had absolutely no idea what I was going to order. My plan was to be inspired by the bright colorful pictures. Bingo! A new sandwich….the Grilled Bourbon BBQ Sandwich was just released and it looked like a winner. Grilled? Good. BBQ? Good. Bourbon? Good!!!

So I ordered, paid my $7.77 and brought it back to the house to see if Jack had scored another hit. Here’s the low down.

Visual Appeal: 7
Upon opening the wrapper, I was impressed that the bread was indeed grilled. It was very crunchy and actually had remnants of dusting flour on each piece. The sandwich was cut in half (it was pretty big) and when I pulled it apart the cheddar cheese oozed out. Score! I love melty cheese!

Overall taste: 2
Big disappointment! I took a bite and almost spit it back out. The meat was bland, chewy and had a slight slimy feel. I’m not sure if that was the BBQ sauce or not but either way it was not pleasant. Upon closer inspection, the meat had a gray tint and looked like it had been sitting out a while. The cheese and sauce couldn’t mask the horrible flavor of the meat. And speaking of the sauce, there was hardly any on the sandwich. I pulled back the bread to see if it was even there. It was, but just a very tiny amount. I tried the sauce by itself and it had an alright flavor. Nothing outstanding but not terrible. I put the sandwich back together and gave it another try. My second bite was even worse. I got a piece of gristly meat that was so tough my dog could barely choke it down. Fool me once Jack, shame on me. Fool me twice and I feed your stinking sandwich to the dogs.

Health Rating (Scale of 1-10): ???
I checked the Jack in the Box website to find the nutrition facts and the Grilled BBQ Bourbon Sandwich isn’t even listed. I guess it’s too new. Or else they know how bad it tastes and they’re not wasting their time adding it to the site. I doubt it will be around long.

After Effects: Only the sadness that I wasted $7.77.

Would you eat it again?
Absolutely, never ever again. Maybe up North where they know nothing about real BBQ the Grilled Bourbon BBQ Sandwich is a big hit. But I caution any true-blooded Texan to stay far, far away from this sandwich. I’d rather chew on my own hand than eat this thing again. Thank goodness for the curly fries or I would have gone hungry.

Sorry Jack. The Grilled Bourbon BBQ Sandwich is a loser. But keep your head up! I’ll always be a fan of your Chicken Fajita Pitas, Jumbo Jacks and those delicious real ice cream milkshakes. Leave the BBQ to someone else. Anyone else.

This post is hilarious! One question, what kind of meat is this?

What’s Going down i am new to this, I stumbled upon this I’ve discovered It absolutely helpful and it has aided me out loads. I am hoping to contribute & aid different users like its helped me. Great job.