Tucked in an industrial strip of Shepherd Drive in Northwest Houston sits Simo’s Diner, a blink-and-you’ll-miss-it slice of old school Americana. Simo’s is most definitely a no frills kind of joint, where blue collar workers mingle with hipsters and retired folks who’ve been going there for years.

Primarily known for their daily steam table specials (which are generally fantastic), they also serve Greek favorites. But on this day, I was geared up for the bountiful offerings from the classic steam table.
Simo’s gives you a choice of an entrée, two sides and salad (or three sides) and bread, all for between $5.95 and $7.95. You can’t beat that price for a home cooked meal these days. Daily offerings include baked chicken, fried fish, roast beef and chicken fried steak. There is a different special each day, and includes chicken and dumplings, spaghetti with meatballs and turkey with dressing.

I decided on the chicken fried steak, mashed potatoes, green beans and rice with gravy. I’ll start off by telling you that the portions are huge. Like, won’t fit on one plate huge. I couldn’t even dream of finishing everything, but I damn sure tried.

The chicken fried steak was delicious, perfectly breaded and not tough – I didn’t even have to use a knife to cut through it. And it was dense, but in a hearty and not unbearable way. The gravy was bland, but I was okay with it as long as there’s salt and pepper to correct it. Better bland than over-seasoned… 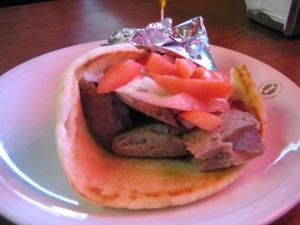 The gyro...see you next time!

The vegetables were also on the bland side, but again, not something I would complain about. I’m not opposed to doing a little doctoring to get it the way I like it. The green beans were tender, but not canned tasting, and served with a tomato sauce/onion accompaniment. The mashed potatoes were above average and I tried the brown gravy with them. It definitely had a more complete flavor than the cream gravy that came with the chicken fried steak. I also had the brown gravy on the rice, and it was even better alongside that. The mushrooms were not overpowering, but actually brought a nice balance (and I HATE mushrooms).

I’ve actually had their gyros and French fries here in the past, but I’ll save that review for another time. I will say that they are solid, if unspectacular. Overall, you can’t go wrong at Simo’s.