The Dish: My 3-Topping Pizza At Vino’s

The dish…on just one dish!

Sometimes, even with food, it takes a good friend’s words to shake some sense into you. With pizza, I’ve gotten into this “specialty pie” rut where I basically order whatever pre-concocted pie the establishment has dreamt up.

I do this all the time at my beloved Vino’s, a place that I believe is serving up the best pizza in Little Rock. Far too often I step up to the plate and order the Vino’s Special, a pie covered with just about every topping imaginable.

Included in the topping mix are those vile, chopped green olives. Why, Vino’s, why? Is there anything more disgusting than the green olive? I say no. Despite this, the Vino’s Special is always satisfying.

Back to that good friend.

Last week, while standing in line waiting to order, I turned to Michael Roberts of Arkansas Foodies and said, “I’m just not up for the Vino’s Special tonight.” He looked at me and said, “Just build your own pie then.” Translation: “You jackass, you know people still choose their own toppings, don’t you?”

Moments later, I ordered a large pizza with half cheese (for the kids) and half Italian sausage, onions, and mushrooms. What came out was as close to pizza perfection as one’s going to find in Little Rock. The crust was slightly thicker than usual, but had that perfect chewiness that I always associate with a good Vino’s pizza. The toppings were plentiful and tasty, but a tad unevenly distributed around my half of the pizza (a slight imperfection). Incorporating a subtly flavored Italian sausage was also a brilliant move. The meat didn’t overpower the other toppings, which at times can happen. Also, props to the chef for utilizing the “ground and scattered” method for meat distribution. This allows for each bite to include a slight bit of meat with the veggies. 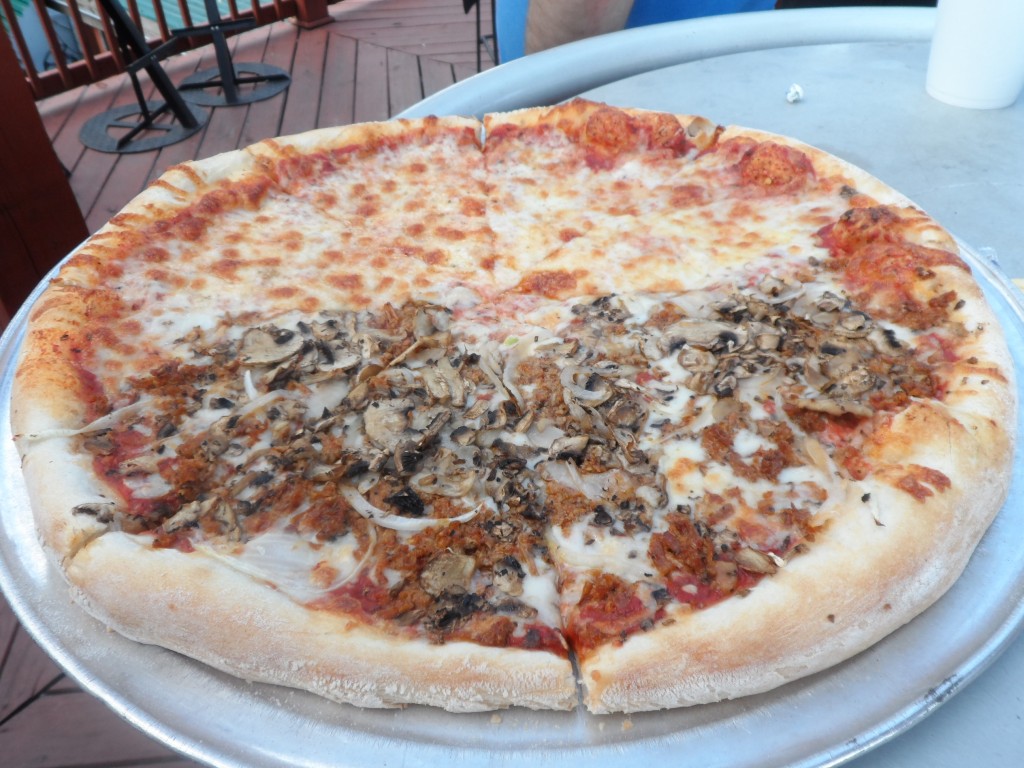 I shudder to think what Mellow Mushroom charges.

Kevin, I love Vino’s pizza! You should try the Margherita. But the place is, in my opinion, really gross. Last time I was standing in line to order, I took a good look around– at the floor, ceiling, etc.– and I realized just how dirty the place is. It totally turned my stomach. And, although the food is great, I can’t eat there again.

I too like Vino’s pizza but can’t get passed the dirt and overall run down joint that it is. I also hate their method of ordering. It’s really a pain in the ass to walk up in get in line to order another beer or whatever. It reminds of a school cafeteria line. I also detest for the most part that their staff lack any whatsoever customer relation skills. I still prefer Iriana’s pie over Vino’s.

I can’t argue with the cleanliness factor. But the place is what it is…it’s a beer/music/pizza joint. I’ve eaten there many times and have never fallen ill. But I understand what you are saying.

John, as far as the ordering process goes, couldn’t disagree with you more. Whenever I order, I just start a tab and our waiter is always great about bringing me another beer and just adding it to the tab. Also, I’ve actually dealt with very friendly service there…especially our last time at the Feed Up. We had a big group and they really took good care of us. And we were way in the back on the top patio.

Not sure about the selection in LR, but I only go to Mellow Mushroom for their beer selection. Pizza is honestly an afterthought for me.

Sometimes the quality of food outweighs its accompanying factors (location,establishment,service, price), it is an industry that can be very rare in these factors that simply can rely on the quality of the product. Vinos is my favorite pizza in LR as well, do I wish some of the above factors were addressed too? Sure, but at the end of the day I am eating great pizza followed by cold beer in a fun environment! Vinos knows who they are and their market, could have easily opened a west location long before the newbies had they wanted to be anyone different in my opinion.

Kevin,
Thanks for the update. For some reason when I was frequenting the place a few years ago the “tab” option was not an option.

I think the perceived “cleanliness” issues with Vino’s spring from two places: it’s an old, old building, and the bathrooms are generally covered in graffiti. Not much you can do about the former, and they paint over the latter a lot more frequently than they used to.

But the place is a working brewery, and the beer comes out clean tasting every time. It’s impossible to get that in a non-sterile environment. It’s a 7 keg system running in a place that can go through over 20 kegs in a single weekend — they’re brewing A LOT of beer in that little facility. Lapses in cleanliness, even outside the brew room, would result in some pretty nasty, infected tasting brew.

I’ve had beer made in non-sterile facilities; it’s night and day from what’s being poured at Vino’s. Hope this helps to ease your minds about the place.

I love the beer & pizza at Vino’s. It’s just not mind kind of place I guess. I don’t find the place to be relaxing. I hate that the deck area is filled with vile cigarette smoke 99% of the time. I would love to be able to dine out there without that people smoking all around me. The so called smoking ban in LR restaurants is a joke.