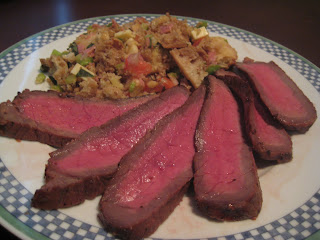 I’ll try out a new recipe every Saturday…you’ll see the good and bad of it!

Description: Imagine the look of flank steak with the tenderness of prime rib. That’s what this London Broil recipe was like. Check out this picture! How do you think it turned out?

Recipe Difficulty (Scale of 1-10) 1
You probably know my style by now….I go for easy recipes that make a nice presentation. All I had to do was toss the ingredients in a Ziplock, marinate the meat overnight, and throw on the grill. About 11 minutes on each side and let rest. Slice against the grain and get ready for the juiciest, most tender piece of meat.

Results: Awesome
At first, it seemed I had bombed on the London Broil. When I took it off the grill, I had concern it was overcooked. Just the opposite…it was perfect. When grilling London Broil, always err on the side of rare. Overcooking it is a sin.

Will I make it again? Yes
This recipe has Sunday football written all over it. It’s a huge piece of meat (that’s what she said) and can feed a lot of people. I am also guessing the rare, bloody nature of it will be a real crowd pleaser. The marinade is simple and provides a nice taste to the meat.

Note: London Broil is not a cut of meat, but it will be labeled as such in most grocery stores. It’s fairly inexpensive.