She Said, She Said: Pondicheri (Houston) 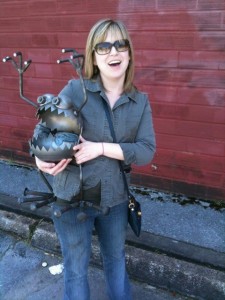 Monthly Feature
Do you remember He Said, She Said? Well…the He is now in Boston. Have no fear…Shelley takes over my spot, Carrie remains in hers, and we now have She Said, She Said.

Shelley’s Take
I have been trying to go to Pondicheri for months now, and then this new TMR assignment popped up, and voila: an actual reason to go! I was so looking forward to it, which made the utter disappointment of dinner even harder to swallow–not literally, of course. On second thought, maybe I do mean that literally. Some of it actually was hard to swallow. 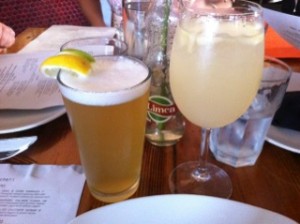 Walking up to this much-discussed eatery in the West Ave center off Kirby and Westheimer, I was impressed. The interior was semi-industrial, yet welcoming, and the window lined walls allowed for tons of natural light; I would have happily sat there all night—drinking, because the food was not worth sticking around for.

I started off the dinner hour with a specialty cocktail on the drink menu, a Lovely Leech, which is basically white sangria made with white wine, apples, pears, and lychee fruit. Quite nice. (The rest of my party equally enjoyed their drinks: a beer shandy, rose sangria, and ghost beer–which is scrimshaw pilsner with a dried ghost pepper floating in it, yowza!) 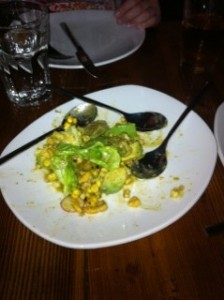 For the starter, I ordered the Texas Shrimp Chaat which had been recommended to me by a friend who had visited previously. Pickled shrimp, butter lettuce, roasted corn, avocado, some little kind of crunchy squiggly crackers, and a lime-tamarind dressing. The size was definitely large enough for 4 to share, which as it turns out was a good thing. I didn’t hate it, but I could probably go the rest of my life without having it again and not miss it. Nothing about it really felt Indian at all. And I don’t get the Texas part–are the shrimp meant to be from Texas? They’re pickled so they could really be from anywhere, right? Is that what makes it fusion? I know Pondicheri advertises itself as fusion, but this could have just as easily been on the menu at Pappasito’s except it would just be called Shrimp Salad and the tamarind would be switched out for chipotle. Maybe that’s what makes it fusion? To me, it didn’t go far enough down the fusion path, because simply adding tamarind and lime to a dish doesn’t make it Indian enough.

My entree, the Ocean Thali, was a major disappointment. Thalis are a large stainless steel platter/tray that contain several smaller dishes with samplings of items that could otherwise be ordered as an entree all on their own. Great idea for someone who has never had Indian food before or someone, like me, who wants to try multiple dishes. The Ocean Thali contained grilled seasonal fish, crawfish curry, uppma, raita & naan. Maybe this deserves a bit of an explanation as to what it all is? That’s what I thought, too, and thinking ahead the folks at Pondicheri have handily included a dictionary of Indian food terms on the back of the menu. Really helpful, but it would have been more helpful if it just said: do not order the Ocean Thali. Or any thali for that matter, because everyone I was with got a different thali, and all of us were quite upset with our waste of money on this subpar Indian food. If you really want to try Indian food, please just go to Shiva in the village and order one of their sampler platters–far superior!! 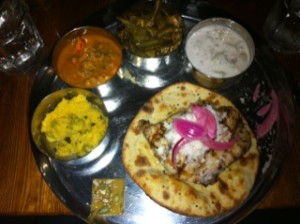 But I digress. Back to the Ocean Thali and its various components. The grilled fish was a white fish of some sort, and I hesitate to even agree that it was grilled. Seared was more like it as the middle was raw and inedible. For some odd reason they served the fish atop an over-baked piece of naan; I suppose to soak up any fish juice–which incidentally ruins the naan and makes it inedible, too!! The fish was topped with some kind of white chutney which I can only assume was meant to be coconut chutney; I can only assume that because it was 100% flavorless. The crawfish curry was, in a word, gross. I had one bite and that was it. Perhaps it would have been better with fresh crawfish, but I doubt it because it wasn’t just the mealiness of the tails that turned me off, it was the nothing-ness of the sauce/broth. I actually really liked the uppma, it’s a lot like grits with veggies mixed in, but for a $20 platter that 1/4 cup serving size should not be the best part. An unlisted part of the dish was the okra, and even though it was tasty I ultimately found it to be greasy and overcooked. Oh, and I almost forgot about the raita. Probably because it was completely forgettable, as it most likely came directly from a Dannon plain yogurt tub with some cucumbers thrown in.

Having said all this… I would actually go back. The lunch and breakfast menus look very interesting, and have to be better than dinner if for no other reason than they would be more baked goods oriented—the tiny little area for bakery items at the front of the restaurant did look appealing. And the lamb burger and roti wraps sound like they have potential. But I would never go for dinner again. And if I ever do go for lunch or breakfast, I will likely be going by myself because I don’t know who would be interested in going with me after reading this. 2/5 Stars 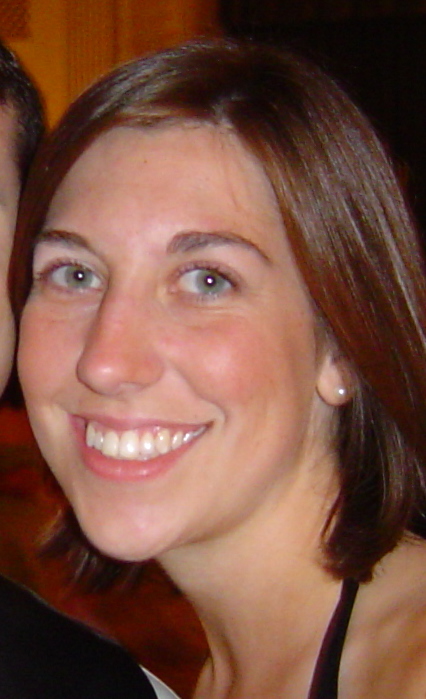 Carrie’s React
Wow. My experience could not have differed more from Shelley’s if she was hitting up Mark’s and I, Jack in the Box. I should preface this review with my general lack of familiarity with Indian cuisine. I’ve had several wonderful Indian meals, but in no way do I consider myself well –versed in the world of chaat, thali, and roti. Now that my confession is out of the way, onto the food.

After opening Pondicheri’s oversized door (which made me feel a bit like Edith Ann), the wonderful aroma of Indian food hit me, making me wish I could snuggle up in that warm, spicy smell forever. Unfortunately, that fuzzy feeling was quickly erased when the hostess told us that it would be just a minute for our menus, as they were printing more. What? No menus ready at 7:00 on a Tuesday night? Strike one. Luckily our waiter was charming making a quick joke about the menu situation and taking our drink order.

Strike two quickly followed with the arrival of my drink. I ordered the Whimsy, a wine cocktail made with rose and flavored with lavender. Unfortunately, the first three-quarters of the drink tasted like the Whimsy was a creative way to use up some cheap wine. Blegh. However, the last few sips told me that the real crime in my beverage was a lack of shaking or stirring. Either would have worked – I’m not that picky about my alcohol. But at $10ish a glass, the majority of it shouldn’t taste like a bad house wine. In fact, I’ve had bottles of Boones that were tastier…Don’t judge; it was college. 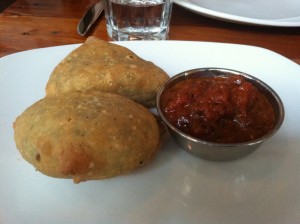 Luckily, my experience did a 180 when the first plate was placed on our table. The saag & corn samosas were amazing. Crispy shells filled with piping hot spinach, mustard greens and roasted corn and served with a slightly spicy salsa-esque sauce. So good.

My entrée, the butter chicken, was so tender that I could have been a 90-year-old who left her dentures at home and I still would have been able to enjoy this one. The fenugreek tomato sauce was full of those warm Indian flavors I’d smelled walking in. And, who’d have thought that rice could taste so good!?! My friend ordered the kerala crawfish curry, and although I didn’t reach across the table and eat out of her bowl, she was very pleased with her choice. The only miss for me was the naan. The garlic naan that we ordered had a crisp exterior and a tender middle, but had the unpleasantly bitter taste of burned garlic. 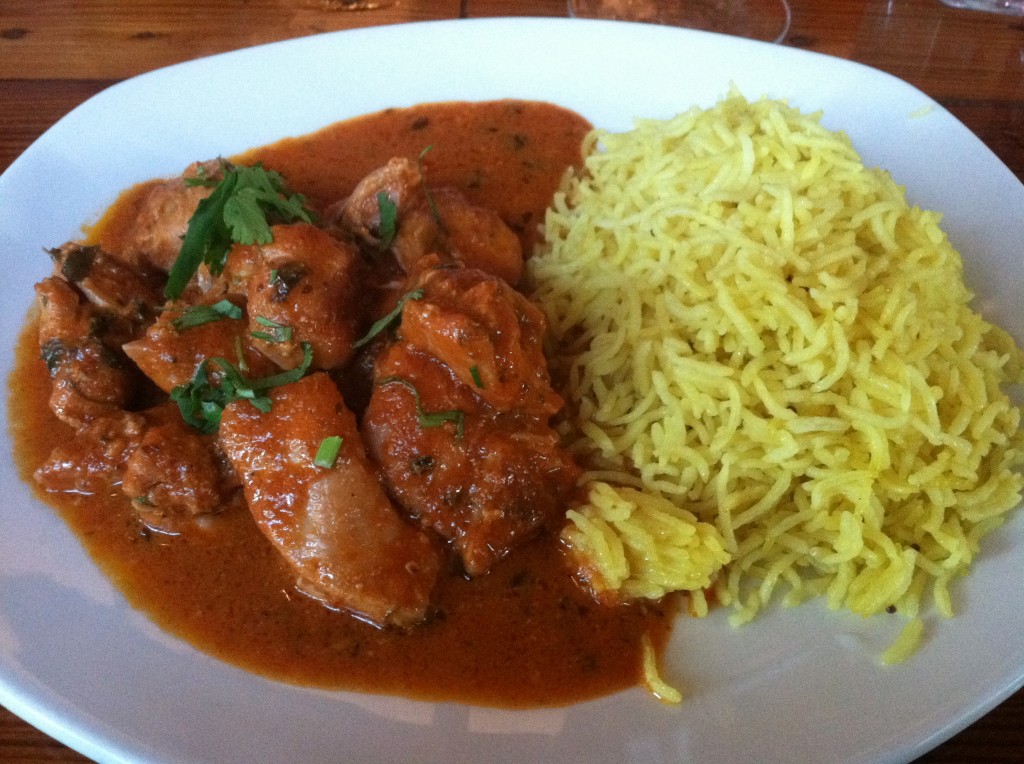 As I walked out, perfectly full and content, the plates of beautiful sweet treats called to me. How to decide on which one to take home with me? The decision was easy when I saw the oatmeal chocolate chili cookies. I have a recent obsession with the chocolate-chili combo and this did not disappoint. A crisp exterior that housed big chunks of chocolate and then the slow heat of chili. Delish!

All in all, I would definitely hit up Pondicheri again. Were there some aspects of my experience that could use a little more attention? Yes. Were the grievances severe enough to keep me away? No. But, please, Pondicheri, have those menus ready! 4/5 Stars