Woo and Kevin will check out a local restaurant, each at different times, and then write separate reviews. This month, they visit Jacob’s Wings & Grill .

In gastronomic history, the wings of gallus gallus domesticus, the modern chicken, were an oft-disregarded part. Then once in Buffalo, NY, on what I like to think of as an especially blustery Northern day, true magic happened: the Buffalo chicken wing was born.

I came to Jacob’s Wings and Grill on a quest for a delicious Buffalo chicken wing. I wanted crispy fried skin and a buttery and vinegary hot sauce with a side of cooling blue cheese, and maybe a few celery and carrots for vegetal posterity. What I found was good, an approximation at all counts, but not an epiphany (well, except for those fries). I do think, though, that with a few tweaks, this family restaurant could really be onto something great.

I ordered the 10-piece which came as half drummettes and half wings, all real chicken on the bone. They were fried in hot oil until crispy, and thankfully were not battered. As far as I am concerned, two roads diverged in a wood; one named fried chicken wings, one named breaded fried chicken wings. And I—I took the more delicious one, and that has made all the difference. To be clear, breaded fried chicken wings will, in the words of the inimitable Church Lady, send your taste buds straight to H E double hockey sticks. I’m glad they follow that rule here.

But the sadness was in the hot sauce. It tasted straight from the bottle, simply poured over the beautifully fried wings. They would have been so much better had the hot sauce been heated in a pan with a splash more white vinegar to reduce the gloppyness, and a pat of butter to increase the glossiness. And maybe if they were a little spicier.

They came with a standard bottled blue cheese, which was fine, but I pined for something homemade. This is a family restaurant, after all. Perhaps that great blue cheese dressing from my Lady and Sons cookbook. Cheap, easy, magical.

On my second visit, I decided to try the Greek gyro salad. This one had the standard lettuce, feta, black olives, tomatoes, and cucumbers, and was covered by a half dozen or so grilled thick slices of gyro and grilled onions. Over this promising start was poured a standard bottled Italian dressing. That made me sad. What a waste to sully the salad with a commercial dressing. It would have been so simple to dress this with a nice lemony homemade oil and vinegar dressing. Also, this salad should come with some fresh pita. Sadly, I felt this missed the mark as a whole.

You know I love a family place. Grandpa, sitting at a table by the door, watching videos on his laptop and listening to them on his wireless headphones and laughing, laughing, is just priceless. I just wish the food was better as a whole. More homemade finishes. But the fries are a hit. So if you’re in the neighborhood and have a hankering for fries, stop on by. But the rest, well, the rest just needs a little more family attention.

I really liked Jacob’s Wings & Grill. I liked its easy-to-get-to-location right off JFK Blvd in NLR. I liked its no-frills, yet welcoming atmosphere. I liked the fast casual, order-at-the-counter, pay, and sit approach. I liked the menu, which was filled with a nice mix of options, from gyros to Philly cheesesteaks to fries to burgers to a collection of sandwiches. I liked the reasonable prices.

And I liked the food.

Granted, we’re only talking about one visit, but I ate enough good items to inspire a return trip. I kept things simple and ordered the Chicken Philly Combo ($8.95), which came with a side of fries and a soda. A deliciously soft, grilled hoagie was filled with an ample amount of tender white meat chicken, along with grilled onions, peppers, mushrooms, and a gooey, melted American cheese. I had zero complaints about this sandwich, other than I wanted it to be bursting from its seams with chicken, which it was not. Apparently, you can buy a bigger version for a couple bucks more, so that fat-ass option might be on the table for my next visit. 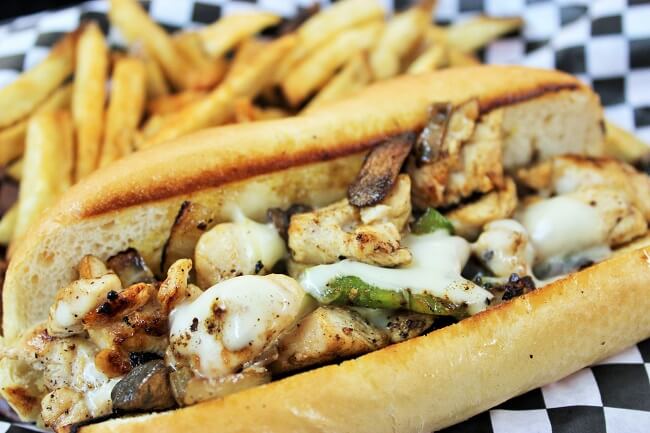 The fresh-cut fries were outstanding, although my batch was filled with those tiny, annoying little scrappy ones that are a pain to eat. But they still tasted great. My buddy ordered a side of hummus which came with several pieces of fried pita bread for dipping. It was a nice touch to fry the pita, as it gave the bread just a slight crispiness that paired wonderfully with the hummus. I even snuck a bite of his Gyro Salad, simply because I wanted to taste some of the gyro meat. Again, nice attention to detail by crisping the meat on the flat top before hitting the plate. 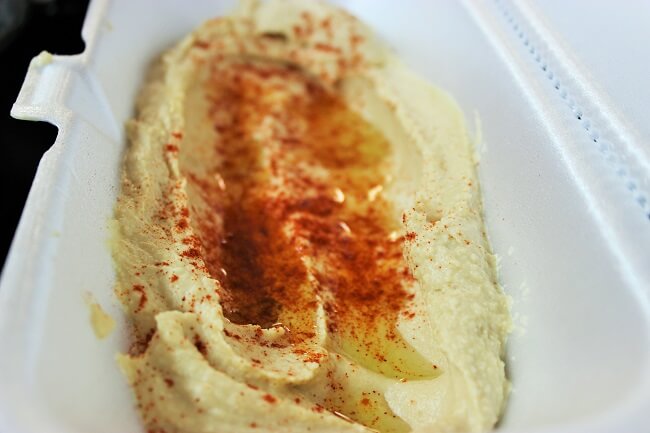 As mentioned, there were a few minor issues with my overall meal, but nothing so glaring that would prohibit me from going back in the near future. Jacob’s is a nice neighborhood joint, and I hope folks within a 10-minute drive of the establishment really embrace it. It’s going to take that support for this place to make it … which I hope it does.

As far a Woo’s comments go, I totally agree. Why would an establishment go to all the trouble to put out a delicious dish, such as the wings or the salad, and not finish it out with home made sauce or dressing. How much harder can it be? Good golly. 🙁
PS. Will the folks at Jacob’s see this article? They need to.