Woo and Kevin will check out a local restaurant, each at different times, and then write separate reviews. This month, they visit El Alamo Mexican Grill.

Located at the end of a sleepy strip mall on Geyser Springs Road sits a quaint family run Mexican restaurant called El Alamo. The menu is large and rounds up the usual suspects. They’ll start you off with a basket of fresh hot lightly salted chips made from deep fried fresh corn tortillas. They’re almost like flaky pastry dough, but crunchy. For me, the chips were just too thick, especially when paired with the thin, runny salsas. This sturdy chip is better prepped for a pico de gallo.

The salsas include a mild red tomato and a deliciously spicy slightly green Serrano chile salsa with lots of seeds. I preferred this hotter one.

On my first visit, I had the chile rellenos, which comes with a taco, Mexican rice and a small salad. The chile rellenos was fried into a soft puffiness and covered with a red Colorado/ranchero sauce. It was a very mild dish, without a lot of notable flavor change between the chile, the melty cheese and the fried puff. It was however most strongly notable for the corn oil in which it was fried; a slightly negative takeaway. The oil left that light sootiness that means the oil could be cleaned more often.

The Mexican rice which accompanied it was delicious; soft with flecks of carrot and peas and flavored with what I’ll bet was some Saizon. The taco was uninteresting: soft ground beef with lettuce and cheese in the same crunchy shell as the chips.

On my second visit, I ventured away from the lunch menu to the specials menu and had the Sopa Azteca. It was incredible. Drool worthy. It has chicken, pork and rice in a chipotle broth with chopped pico de gallo salsa (tomatoes, onions and cilantro) and avocado on top. It has big chunks of chicken and pork in it, and mine came with the leg, to prove the point. It comes with a wedge of tart and juicy fresh lime and a choice of flour or corn tortillas. Choose the corn. They may not be homemade, but they’re as close to that as you can get. And get the big bowl. They don’t have one on their menu, but tell them you want it. Trust me please. You do. 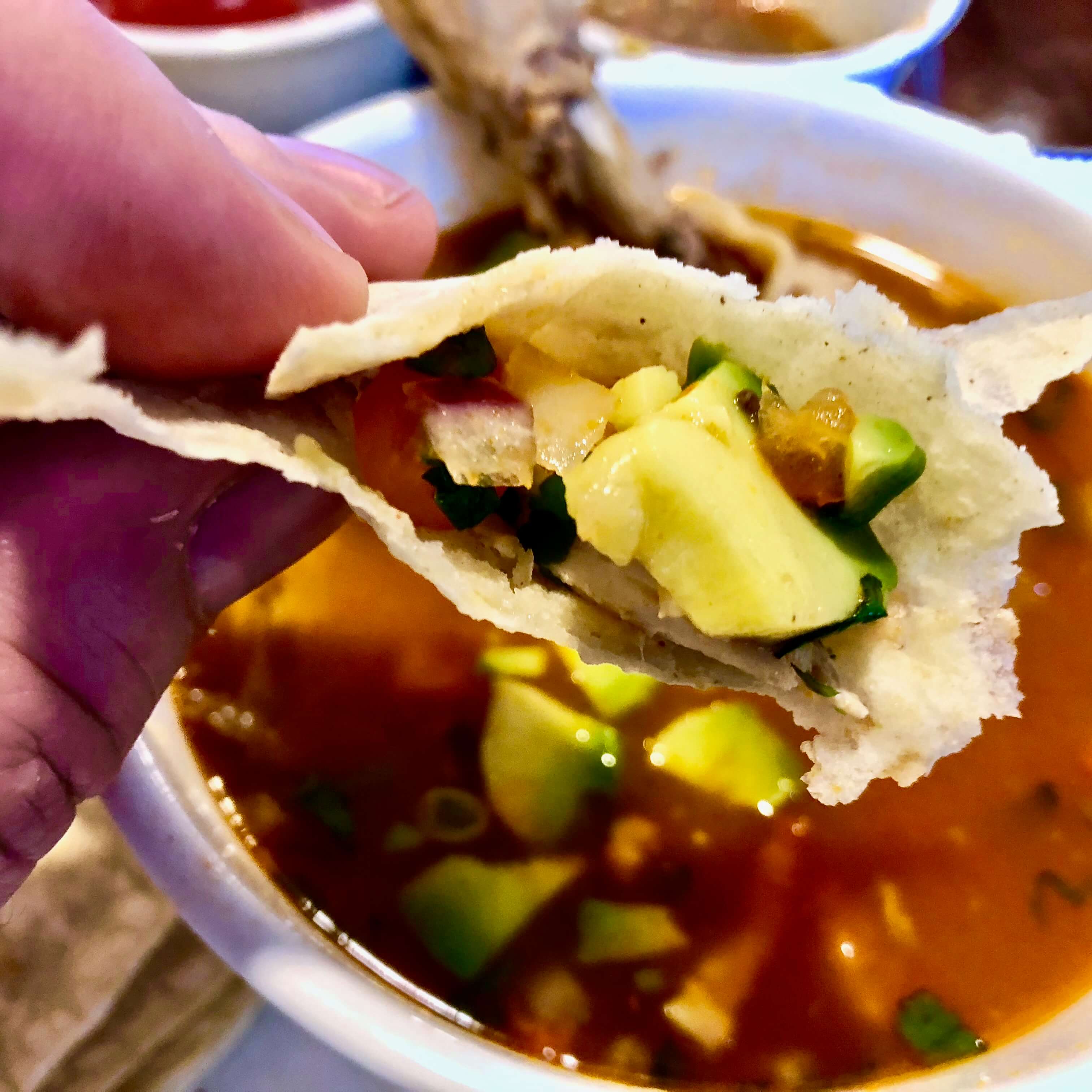 The staff is super pleasant and there’s plenty of laughter in the kitchen. Service regularly touches the table. They want you to be happy and enjoy your meal. I got some cilantro in my glass (I’m a slob) and my server noticed it and brought me a fresh glass of water. I didn’t even notice the cilantro, but she did.

I found the food hit or miss depending upon what I ordered, but they’ve implemented a new menu so you may find the variety or the dishes that you like. In the end they’re nice people earnestly trying to make a good living, and taking those additional steps that may get them there: frequently touching the tables and modifying their menu with fresher takes on the standards.

A few months back, a reader tipped me off about El Alamo Mexican Grill, and I thought it would make a perfect candidate for a “He Said, He Said.” So here we are. I popped in for lunch with two buddies, so I was able to try a few more items than I normally would have if I was flying solo.

We started with the complimentary chips and salsa, the latter of which was actually a duo, one thin and vibrant red and the other a chunkier, spicier option. They were both house-made and paired well with the thick corn tortilla chips. Chip enthusiasts will be happy to learn that I THINK these are the same chips that make folks flock to Casa Manana. Anyways, thin or thick, I love all chips, just so long as they don’t suck. And these did not.

We then ordered one each of cheese dip and guacamole. The cheese dip was fine, heck, probably better than fine. Thin, mild and ideal for the chips, this cheese dip showed its face later in the meal on top of a steak and shrimp burrito. The guac was a miss. Just too much going on and not enough big flavors. A squeeze of lemon juice would have done wonders for it. 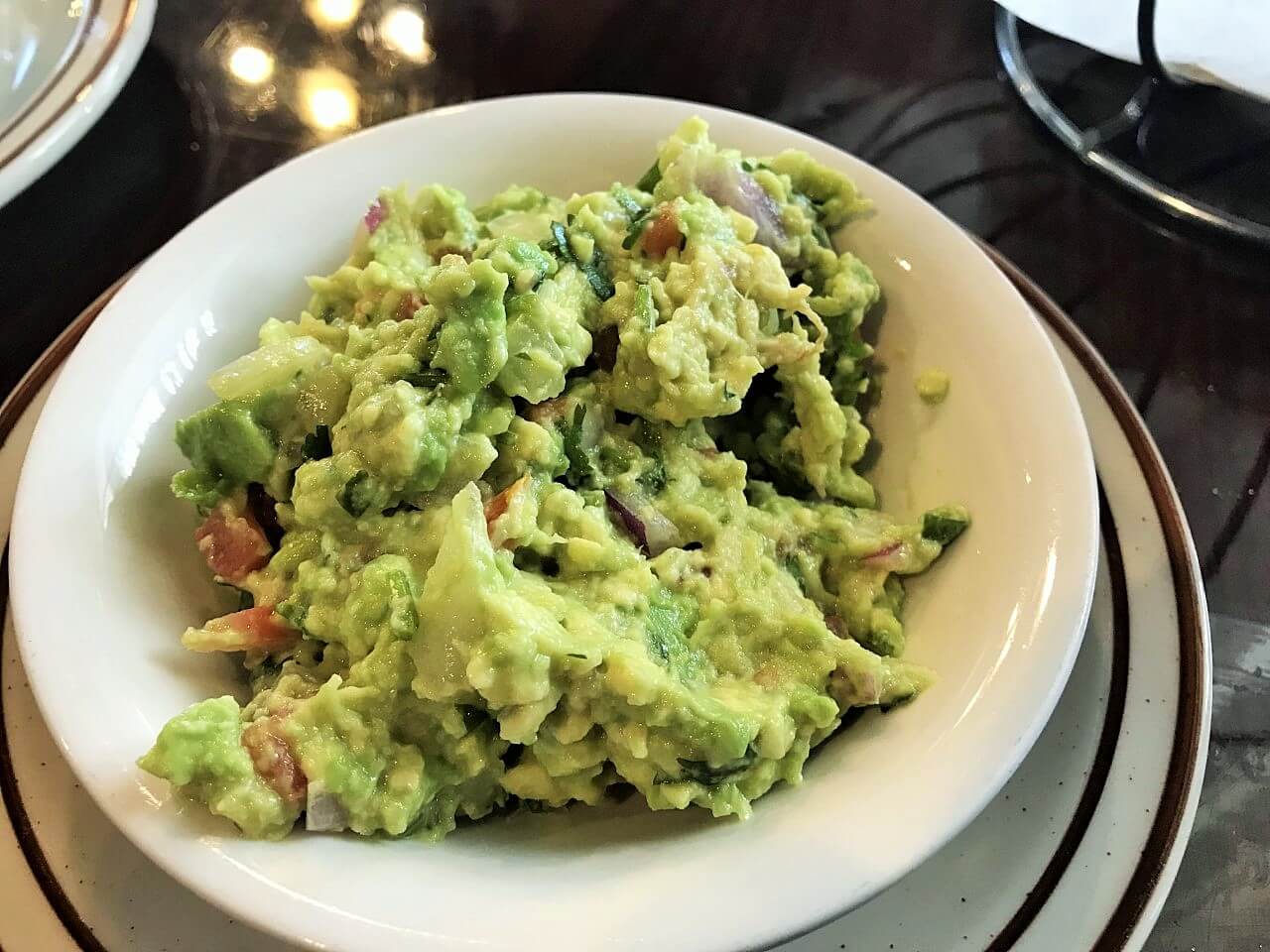 It was chilly outside and I happened to be in the mood for soup, so opted for the Sopa Azteca. It proved to be an outstanding choice. The red broth was filled with chicken and pork, cilantro, rice and perfectly ripe avocado … among other ingredients. It was neither spicy nor bland, but certainly quite flavorful. The chicken leg resting in the bowl (half in, half out) was a nice touch, both visually and for my appetite. I passed on using the accompanying corn tortillas to sop up some broth. Figure I’d already had my fair share of chips. 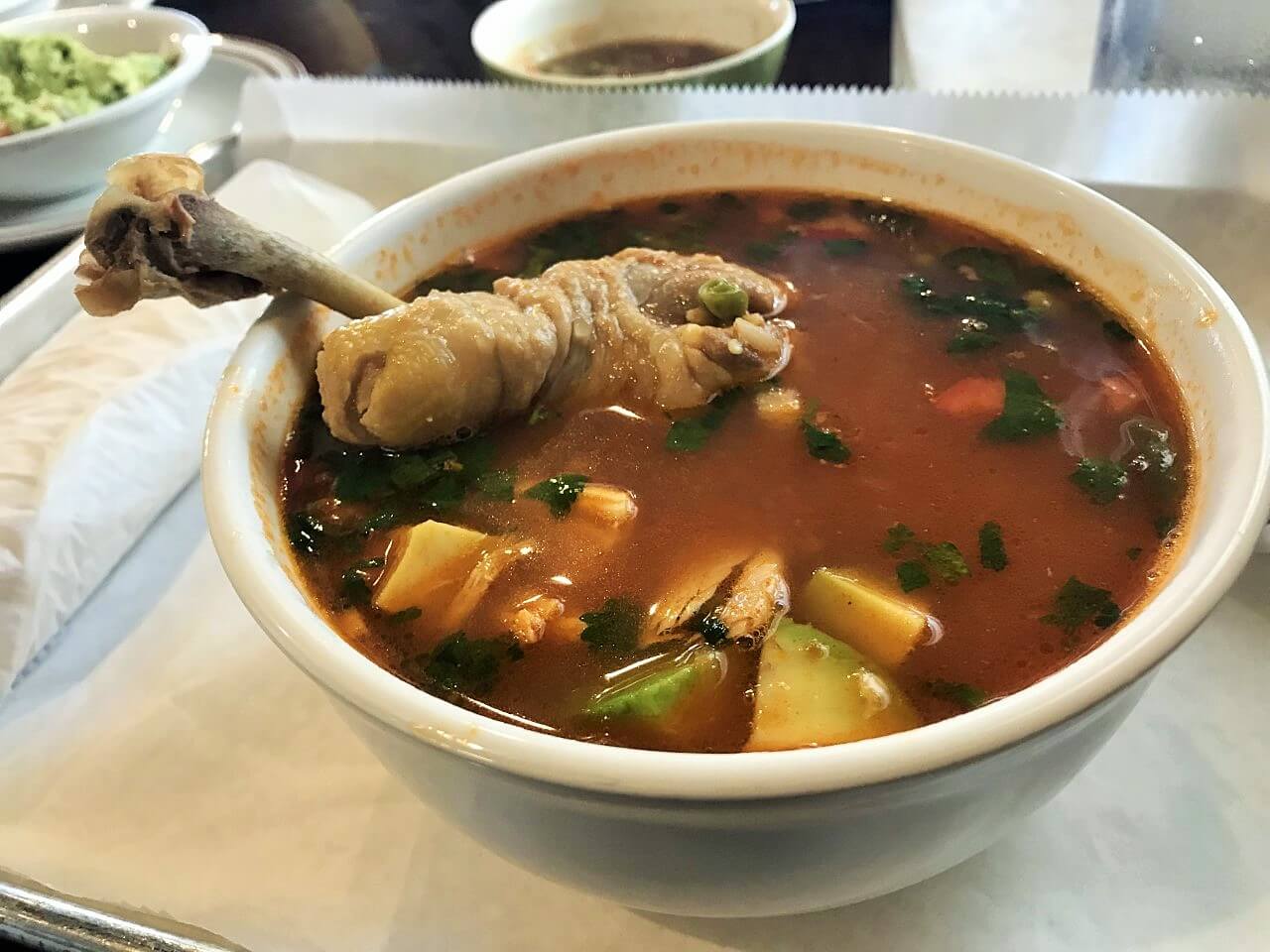 My friends both ordered the steak burrito, but one decided to also include some shrimp, which ended up being a wise move as they were fairly sizeable and not overcooked. My one bite was not enough to formulate a thorough opinion of the dish, but it was enough to ensure a future order. 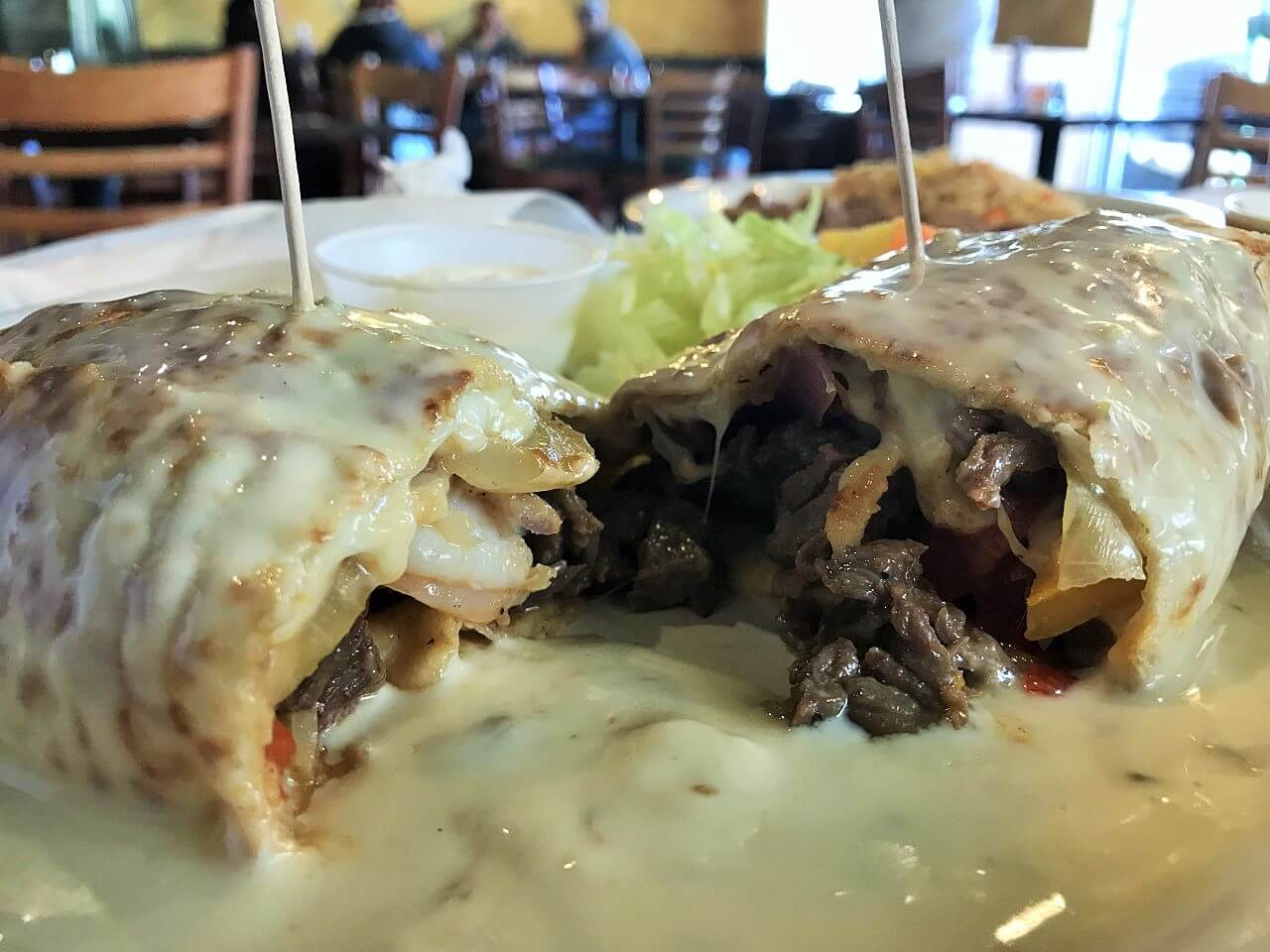 And yes, there will be future orders because I really enjoyed El Alamo. Service was friendly and attentive, prices were affordable, and the food, especially that Sopa Azteca, was delicious.