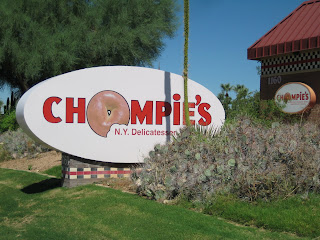 I’ll do a restaurant review on Mondays. Most of the time it will be a place in Houston. This week it’s Phoenix.

The Background: If you’re a loyal follower of the blog, you know I started it off several months ago with my “Top 20 Favorite Places to Eat”. Chompie’s was #6 on my list. My brother and I first discovered Chompie’s on a Spring Training baseball vacation to the Phoenix area back in 2002. Three years later, we were back in Phoenix for baseball…this time with a few more friends. Guess where we ate three times? Fast forward to 2010…family vacation to Sedona. We flew into Phoenix. Pretty simple process: 1. Get off plane. 2. Rent mid-size car. 3. Head to Chompie’s.

The Scene: My favorite of the four Chompie’s locations is the one in Tempe…just outside the Arizona State campus. Chompie’s is an authentic, NY-style, Jewish deli. And when I say authentic…I mean it. My dad is from New York. I spent most of my childhood summers in New York. Chompie’s is the real deal. I walked through the door and it was just as I had remembered. You’re greeted by a full bakery of bready goodness…black/white cookies, Everything bagels, rye breads, etc. I glanced at the register, only to find a poster with a very recognizable figure. Yup, Man v. Food had just been here in July to take part in the Jewish Slider Challenge. My little restaurant was “all grows up”.

The Menu: Let’s dispatch with the formalities…every single menu item was sent down from heaven, so nothing is bad. You can order anything at any time, but you may need a good twenty minutes to read through the selections. Corned beef, pastrami, matzo ball soup, potato pancakes, burgers…just about any food you can think of. It was breakfast time so I went with a Steak Skillet. Time meant nothing to Sara…she went with the Reuben Sandwich. I gave her a funny look for ordering a Reuben at 9:30 a.m., but it only motivated me to order one of those Jewish Sliders.

The Taste: Awesome! The skillet and Jewish Slider were perfection. What is a Jewish Slider, you may ask…soft roll, tender brisket, potato pancake, and dipping gravy. I snuck a bite of the Reuben. Sara and I both agreed it was one of the best things we had ever eaten.

The Verdict: There are two restaurants in the country I’d jump on a plane for…Oklahoma Joe’s in Kansas City and Chompie’s in Phoenix.