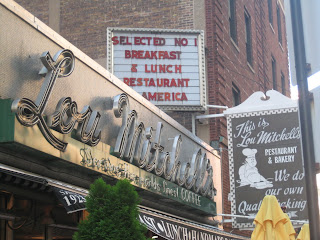 Did you think I was done with Chicago? Think again.

The Background: I did some quick detective work on the computer and found Lou Mitchell’s. It was about two miles from our hotel and from the looks of their web site, screamed awesome. Lou Mitchell’s sits on the start of famous Route 66, claiming to have the “Best Breakfast in America” and the “World’s Finest Coffee”. So much for modesty.

The Scene: LM’s was bustling at 9AM on a Tuesday morning. As you walk through the door, you’re greeted by a lovely hostess offering up complimentary doughnut holes. I think I may, and I think I might. The place is all Chicago…and it’s great. Better not get too caught up in the ambiance. The pace is hectic and although the waitresses are friendly, they don’t have time for dilly-dallying.

The Food: I get it…when places claim to have the “World’s Greatest Something”, it mainly just makes for some fun conversation. That said, the coffee was excellent, especially for a diner…which is typically known for serving up weak java (east of krakatoa). I ordered the egg sandwich. Oh my…was it good! A sunny-side-up egg, melted American Cheese and fresh sausage links jammed in-between two thick slices of toasted wheat bread. It came with a side of thinly sliced potatoes. One bite into the sandwich breaks the yolk..and it’s on like Donkey Kong. A little ketchup, a little egg yolk, a little potato…and there’s a party on my plate. Sara ordered the strawberry-stuffed pancakes. They were fluffier than Cartman’s @ss and we both agreed they were some of the best we’d ever eaten.

The Price: A little expensive for breakfast. My sandwich was $6.25, but they tacked on a $1 for the cheese (which I think is bush league). I was more than happy to pay a little extra for the memorable experience.

The Verdict: If you’re visiting Chicago and crave a good breakfast, Lou Mitchell’s is almost a must-go. They even do lunch…maybe next visit.

Tips: LM’s gets crowded and is a cash-only place. Kids and women get free Milk Duds. No kidding.