The menu tasting followed our tour of the Harbor Sweets Chocolate Factory. The entire afternoon/evening was graciously coordinated by the Boston Food Bloggers.  Would the restaurant be every bit as good as our chocolate factory experience?

Let’s get right to the food.  Of the seven courses, five were exceptional and two missed the mark.

We started off with the Zucchini Blossoms and Strips. This lightly fried, tempura-battered appetizer was stuffed with herb goat cheese and topped with a balsamic reduction. It was sensational and maybe even THE best dish I’ve had in my four months in the Boston area. 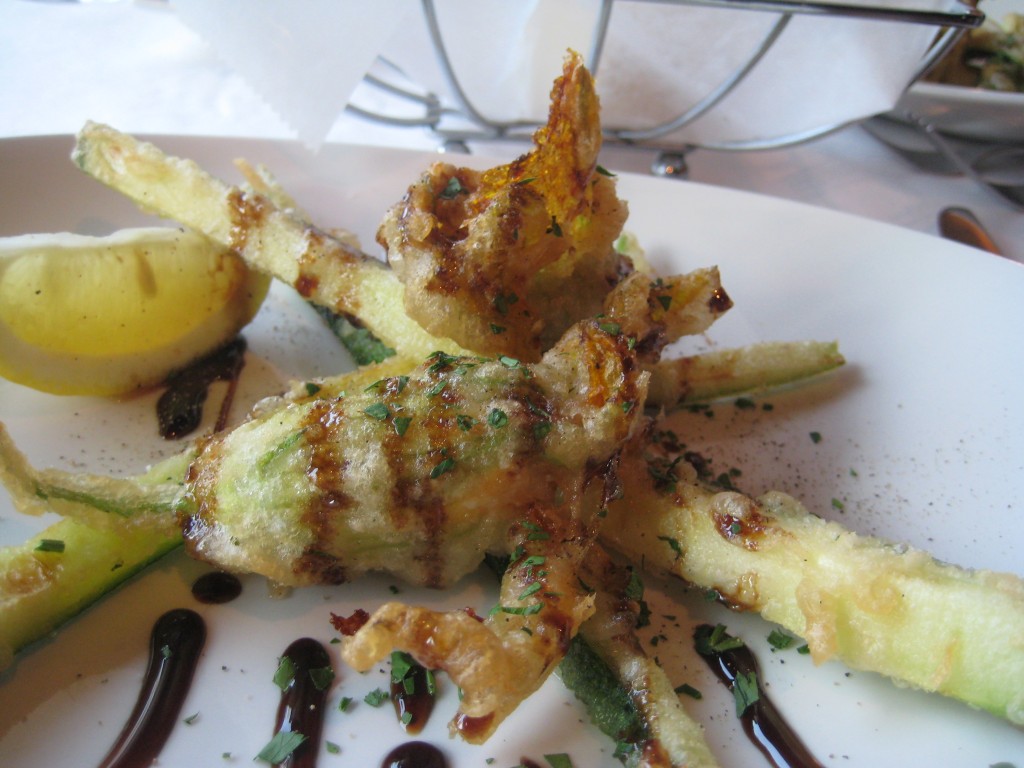 The perfectly fried strips were not at all greasy. Neither was the blossom, which was stuffed with a creamy, somewhat subtle goat cheese, that was just begging to be run through more of the balsamic reduction. I obliged. 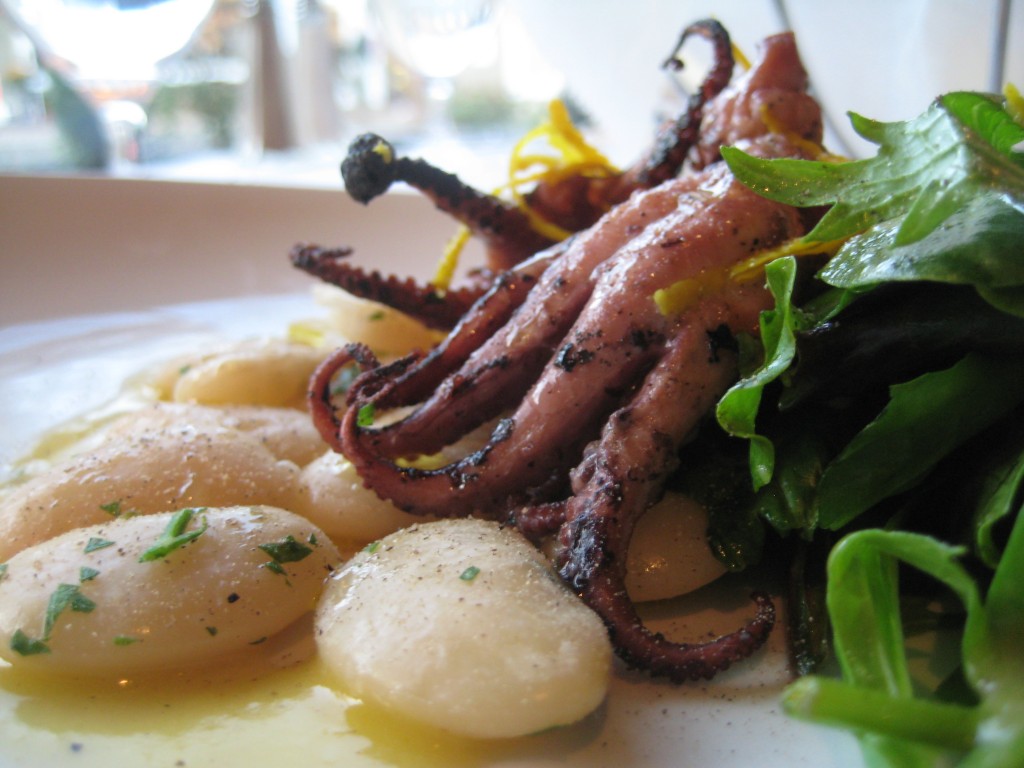 Next came an absolutely beautiful dish of Grilled Baby Octopus, with gigante beans and a side of greens. The octopus was tender and had a wonderful chargrilled taste that was only topped by those aptly named buttery gigante beans. Adriatic was now two for two! 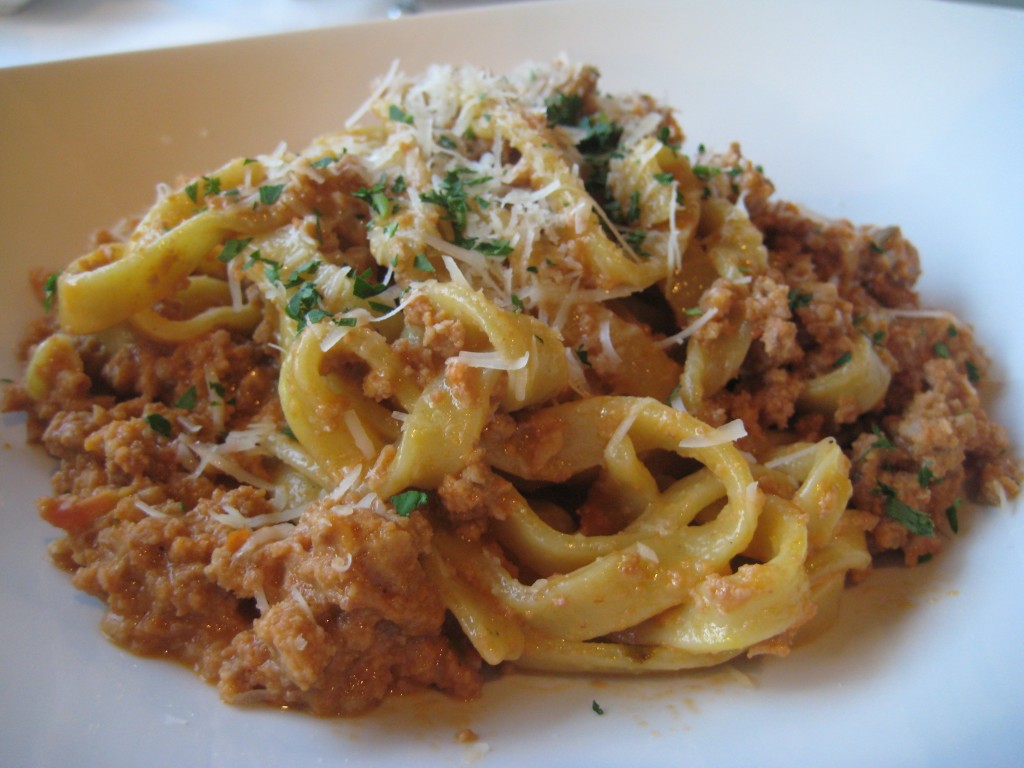 Once the Housemade Tagliatelle (with a traditional Bolognese) came out, I was completely sold on this restaurant. The pasta was soft to the bite and wrapped around themeat in perfect harmony. Everything was held together by a sauce that was neither thick nor runny. 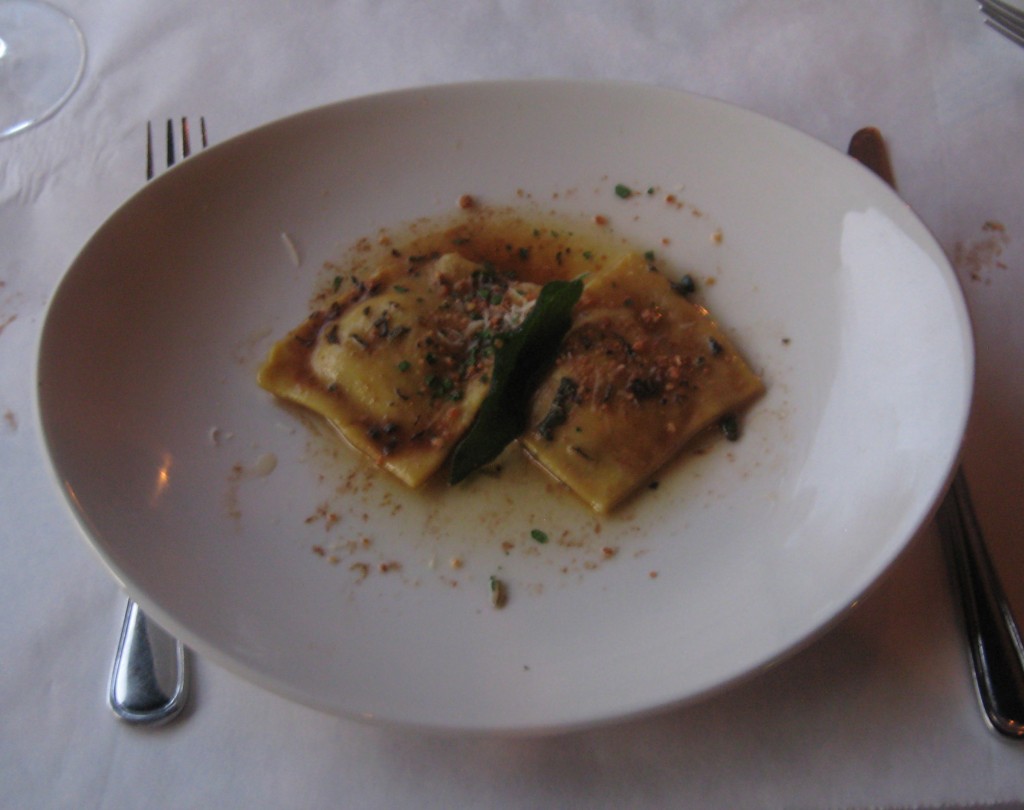 It was obvious the folks at Adriatic were well-versed in the art of pasta making. So, it came as no surprise that the Ravioli di Zucca was met with rave reviews by me and my table mates. The ravioli was filled with sweet roasted butternut squash, topped with a crispy sage leaf, and rested in a rich brown butter sauce. Adriatic was now four for four! 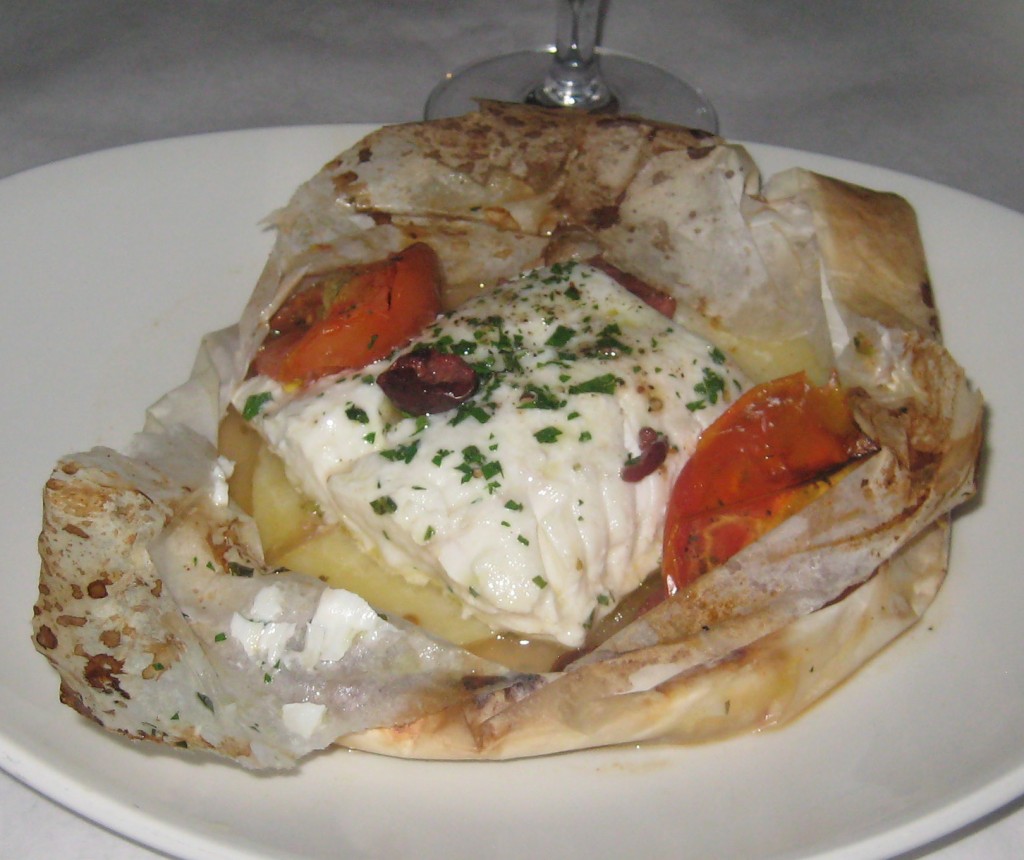 The Native Cod in Cartoccio was the first miss. The fish was well cooked—moist and flaky, but was consumed by an overpowering olive flavor. I’m not the biggest fan of olives, so this dish just wasn’t for me. Again, every element on this plate, including the bottom potato layer, was perfectly cooked. 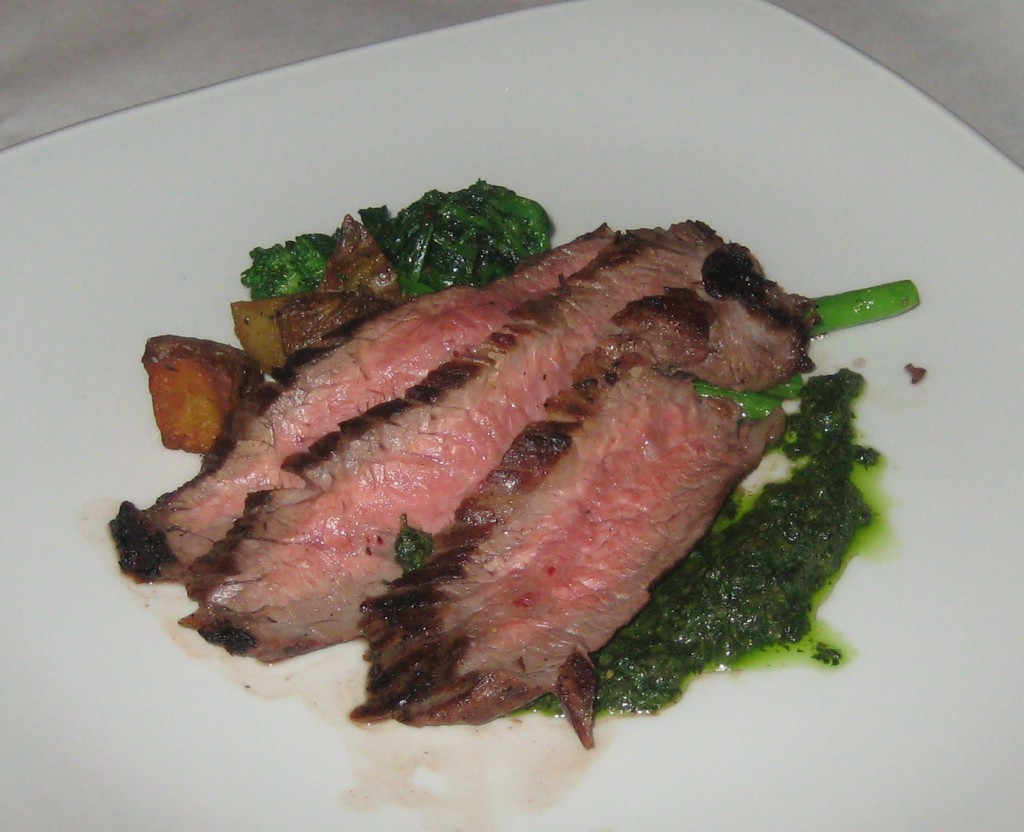 The second to last dish, the Grilled Flank Steak with salsa verde, completely missed the mark. The execution just didn’t match the rest of the courses. The meat was just too chewy and poorly seasoned. 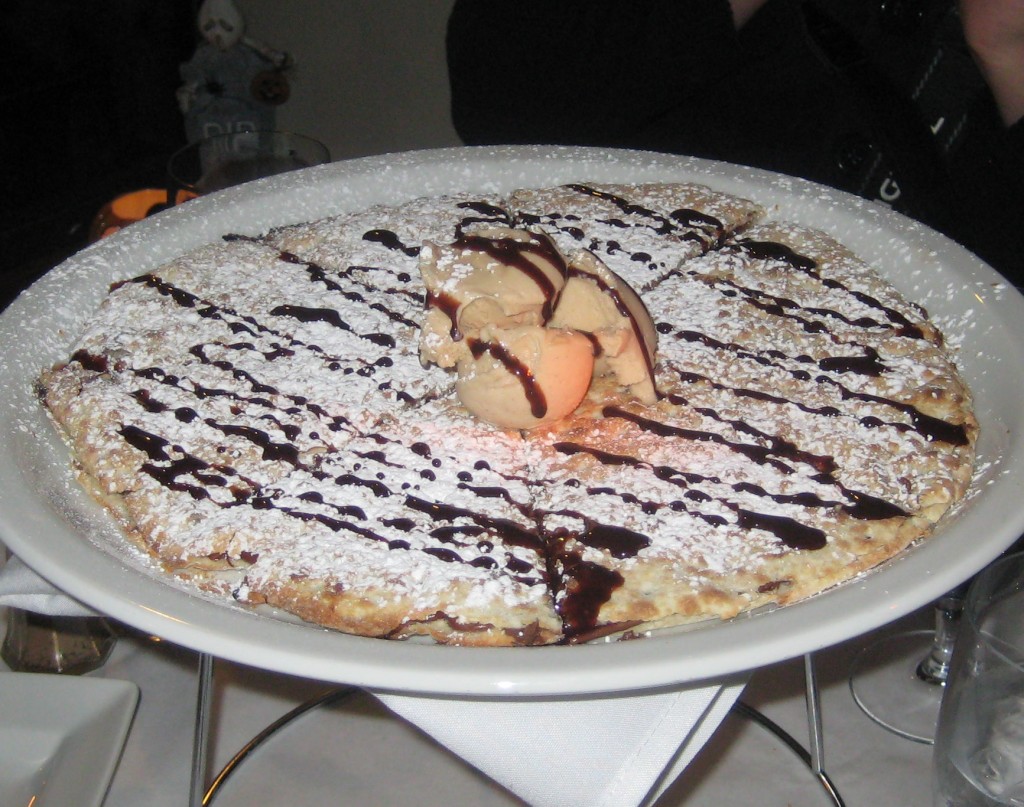 I was completely stuffed and had just about raised the white flag, when they brought out a double layered, chocolate Nutella-filled pizza. This was just not fair. Amazingly, the best part of the dessert was the pizza crust…so light and chewy.

I live about 55 minutes from the Adriatic Restaurant, but I wouldn’t hesitate to head north and dine there again. In fact, I’m already pretty damn excited about my next visit! The casually-hip atmosphere is perfect, whether you’re on a date or with the family.

I love zucchini blossoms. What a great meal!

Go figure that a zuchinni blosson in Salem would top your list so far! Great review.

I gotta say, I’m a little surprised myself!