If you’re like me, you’ve probably driven past Taqueria La Pasadita a hundred times and never even realized it. It’s a drive-up taco stand located just across the street from the 24-hour McDonald’s on Cantrell near Mississippi.

Well, if you’ve never stopped, I highly recommend doing so in the near future. While I’m not going to make any outlandish claims that it’s the best taqueria in Little Rock, I will say it’s certainly in the upper echelon. The affordably priced menu is simple, comprised of an assortment of quesadillas, tacos, tortas, gorditas, sopes, and burritos, while featuring proteins like asada (steak), pastor (pork), chicken, and shrimp.

I’ve been to La Pasadita three times, and had several of the tacos, but was truly impressed by the pastor burrito. For $8.40 (and that includes tax), you get a large tortilla stuffed with tender pork, rice, refried beans, and guacamole. And the best part? The entire thing is drowning in a delicious cheese sauce.

This burrito is really two meals in one, so I decided to eat half for lunch and give the other half to my daughter … because I’m a wonderful father. While it won’t blow you away with extreme seasonings, the overall burrito is tasty but also mild enough to suffice just about any discerning palette.

The service has been fast and friendly on each of my three visits. Don’t be concerned if you pull up to a full parking lot at 11 a.m. on a Tuesday. The food moves fast and cars come and go.

Next time around, I’m trying out the tortas. If they’re anything like the burritos and tacos, I won’t be disappointed. 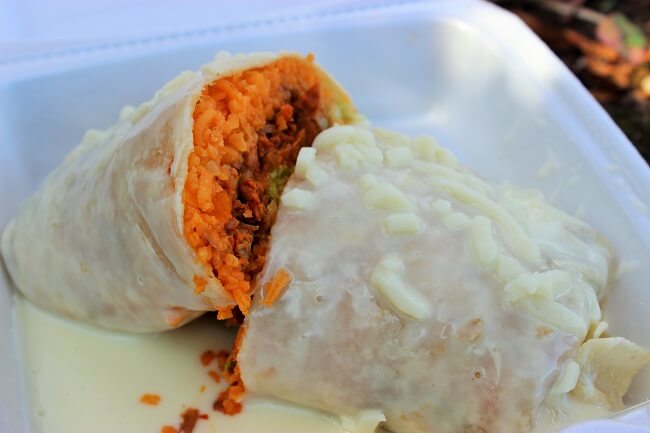