Q to the A: Jack Tyler Dines

Ever wonder what other foodies are thinking? Me too!

1. What is the name of your blog? Actually, I have two blogs and both are food-based. The one that Houstonians are most familiar with is Jack Tyler Dines. I also spend much of my time in Mexico writing about the culture and cuisines of that country. That blog is Jack Tyler’s Mexico and it is my “day job”.

2. Could you describe your blog in one sentence? My blog is merely a way to share the good news of my POSITIVE dining experiences in Houston… and let someone point out flaws in chefs and the terrible restaurants.

3. How did you get into food blogging? I’ve been a travel and food writer/photographer since 1976. I’ve published many magazines internationally and somehow there is always a food focus to most of them. As a former member of the Greater Houston Restaurant Association, including three years on the board of directors, I understand dining from the restaurateur’s viewpoint, so I try to bring a different perspective to food blogging.

4. What’s the toughest part of writing about food? Although I am an avid cook, I dine out several times a week and my blog is primarily aimed at sharing the good news as I see it. While space in a blog costs nothing, my time is valuable, so I waste no time writing about terrible experiences. There are those who think that a food writer should be controversial and really burn a chef for a bad experience. There IS a place for that kind of writing, but it’s not me. I pay for my meals and I can do as I please. So, the toughest part for me is being taken seriously when I only bother to write about the good times.

5. What’s been your favorite food moment? Anyone who writes for a living (I travel Mexico writing for a living) would have trouble identifying a favorite food moment. However, I probably think most often about a culinary/wine press tour of Mexico’s Baja norte wine country when I had lunch in the lobster fishing village of Puerto Nuevo. The 25-30 restaurants in the town all serve “Puerto Nuevo-style” lobster… Spiny Lobsters boiled, then finished off fried in lard (yep… lard). I remember platter after platter of lobsters, rice and beans showing up on the table until we begged them to shut off the flow. 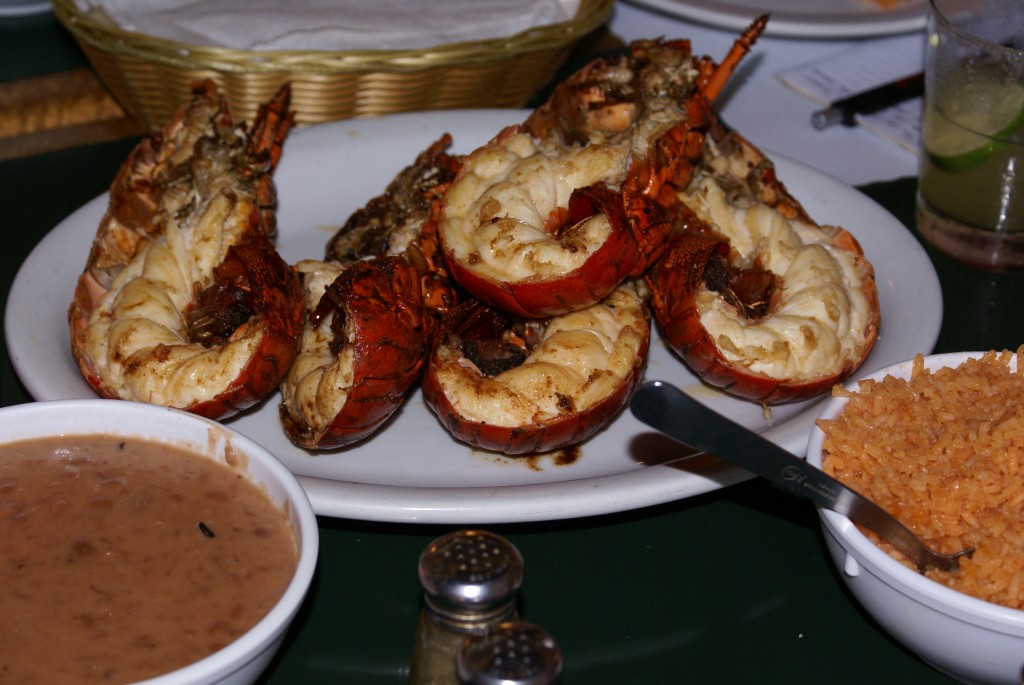 6. Do you have a top restaurant? My favorite restaurant in Houston is probably Tony’s. It’s nice to go to a restaurant and know without any doubt that nothing is going to go wrong.

7. What’s one U.S. city you’d travel to just for the food? I love seafood and it would probably be San Francisco. I’m a student/ lover of American regional cuisines and can do without the celebrity chefs in NYC… I want some Crab Louie, Hangtown Fry and a bowl of Cioppino with freshly baked sourdough bread. I’d probably have to eat at Chez Panisse, too.

8. Is there a food you absolutely despise? No.

9. What’s the craziest thing you’ve ever eaten? Possibly, some others would say it’s my favorite nighttime treat of a Texas 1015 Onion/Peanut Butter sandwich. I don’t see it as crazy, but have eaten onion and peanut butter sandwiches since the 1950’s. “Crazy” is in the mouth of the beholder and the grasshoppers I eat a LOT in Mexico and here at Hugo’s are considered strange by those who haven’t tried them.

10. Are you more likely to stick with what you know, or do you try something new each time? I try different things whenever I can. Some things that are predictable in a given restaurant are Gumbo at Massa’s, Broiled Flounder at Christie’s, Crab Cakes at Brennan’s and Lobster Bisque at Tony’s, along with his signature Soufflés for dessert).

11. Anyone can write a blog. What makes yours different? Anyone with a cellphone camera and the price of a meal can write a blog. While most food bloggers compare one restaurant with another and this dish at this restaurant with that dish at that restaurant, I try to go to the roots. I like to compare dishes I taste with those that are considered the “benchmarks” for those dishes. I like to go to the roots and history of a dish, whether it’s Shrimp and Grits, Chili, Fajitas, Cioppino, Caesar’s Salad, pizzas, hot dogs or gumbo. I write for those with curiosity about foods, in general. You will never hear me say “I’ve eaten tamales all over Houston and this is the best.” I’m generally not found on the Blog Rolls of other writers, either. I don’t exist.

Great Q to the A… and thanks for the intro to Jack Tyler.

I can’t tell you how enjoyable it is to learn about all these wonderful food bloggers. Jack’s story is a fascinating one.

I’m a little late to the party, but Jack shouldn’t complain too much about lack of respect. First of all, I’ve seen him linked to by HTownchowdown and Eating Our Words any number of times. Second, I find his relentlessly positive perspective kind of off putting. Even though he’s paying for his own meals, writing only good things makes them read like straight PR. The guy doesn’t have to be tastybitz, but at least tell us ONE THING you didn’t LOVE about a restaurant you visit.

I think he’s very up front and honest about his “positive” angle. And thus, I don’t have a problem with it.

I agree that he’s very honest about his perspective. I just think that perspective is kind of boring. If he wants more notoriety, implied by his complaint about not being on blog rolls, then he might consider changing his approach. There is, in my opinion, a limited audience for posts that give tongue baths to Tony Vallone.

I’m hoping Jack checks back in for a response.

On a side note, a food blog has never quite made it until the term “tongue bath” shows up in the comment box.

TMR is all grows up.