Q to the A: Chocolate Fountain Incident and Egg McMuffin Guilty Pleasure

Ever wonder what other foodies are thinking? Me too. Special thanks to Erin for her answers!

1. How many years have you lived in Little Rock? I’ve been here for 5 and a half years.

2. What one Little Rock restaurant has never let you down in terms of food and service? Maddie’s Place. I’ve been a fan of this restaurant ever since they opened. While I don’t get there as often as I would like, the food is consistent and delicious and it’s run by good people. It also happens to be one of the “must see” places to stop when my parents come to town. Not only do they love the food, but we realized early on that they have a bit of history with Chef Brian Deloney. It’s a cool story.

3. What under-the-radar spot would you recommend to a new Little Rock foodie? Personally, I don’t think I’m cool enough to know any under-the-radar spots. If I’ve been to a restaurant, I think that it’s already be noticed and recognized as being great. With that said, I’ll answer this with a restaurant that gets forgotten simply because it’s not in a typical dining destination area. That spot is Natchez. It’s tucked into an office building that is easy to pass by, but once you step in, you wouldn’t know. Chef Alexis is a kind, warm and welcoming restaurateur who is creative in her menu writing while keeping it comfortable. She makes you feel like you are a guest in her own home. Don’t think of downtown just as where you work. There is great food there! By the way, if you visit and see a shrimp or gnocchi dish on her menu, you’d be silly to miss either.

4. What are a few of your guilty food pleasure items? Smartfood Popcorn (I’ll take it over a bag of chips any day), an Egg McMuffin, white cheese dip and homemade Linguine and White Clam Sauce. My dad and I have been making this dish together for years. We first got the recipe out of a Junior League cookbook and it evolved and improved as our food knowledge grew. The tradition started because my mom was traveling a lot with her job so the two of us spent a lot of time menu planning and cooking together during my middle and high school years.

5. Where can the absolute best dessert in town be found? I tend to not order dessert while dining out, but I often spring for it at Trio’s. While they stock a pretty amazing dessert tray full of homemade treats, it’s their Strawberry Shortcake that I can’t turn down. Arkansas strawberries, homemade shortbread and fresh whipped cream…can’t go wrong! If I’m out and about and need a sweet treat, my go-to orders would be a chocolate chunk cookie from Community Bakery, a lemon bar at Jimmy’s Serious Sandwiches or an iced sugar cookie at Sweet Love Bakes.

6. What is the craziest thing you’ve done related to food? As far as eating weird things, I’ve not done anything really crazy. While living in Cairo I probably ate camel (it’s inevitable there) and intentionally ordered hot dog & calamari on my Pizza Hut. But the craziest thing I’ve done related to food also happens to be one of the messiest. A good friend hosted a party to help me raise funds for a charity walk I was participating in. Her cats had been locked up in a room all day away from the party so we were tidying up the kitchen before we went to bed so they could have free reign of the house again. Well, all was going well until I picked up the chocolate fountain. As I was rounded the corner to the laundry room (where we were going to stash it) it began to wobble on the tray I was holding. Pretty much went downhill from there, literally. Chocolate went everywhere. Down the front of me, on the floor, on the wall, pretty much ruined the new shoes I was wearing. But we laughed so very hard and we ended up meeting my fundraising goal that night! 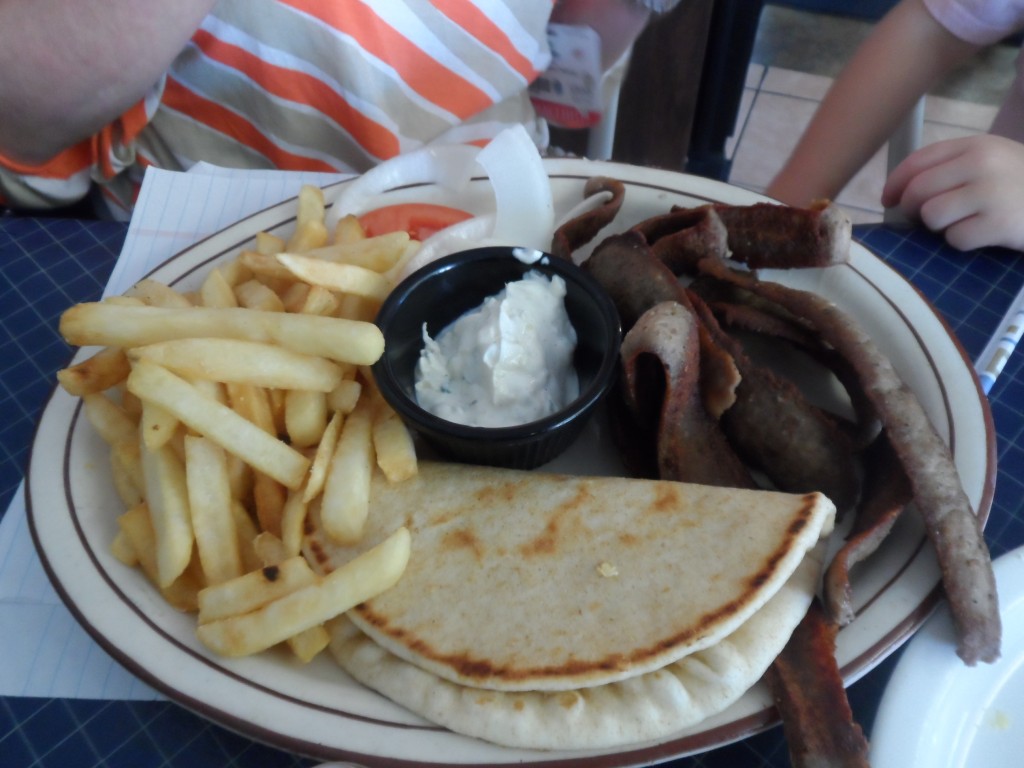 It’s time for Erin to pay Leo’s a visit!

7. How would you describe the Little Rock food scene? This is an interesting question. I know many diners are not satisfied with our current options and wish that restaurants would go for it and take risks. But a lot of people are satisfied with the options we have and love the old standards. So who am I to judge what they deem as “good”? That is an individual decision. With that said, I would describe our food scene as “proud”. Our local restaurants have a lot of pride in the use of ingredients from local farms, pride in creating dishes that share their idea of comfort and culture with us and a lot of pride in making some of Little Rock’s most beloved dishes, even if they’ve been around for half a century.

8. If you could jump in a plane this very second…where would you go and what would you eat? I’m of course torn between nostalgic memories of food and a big adventure. At this point, I think my heart will win. I’d fly to my hometown (I have a few of them) of LeRoy, NY and eat Beef on Weck, Pizza Land pizza, wings and fried dough, fresh corn on the cob from McKenzie’s farm (purchased at the unmanned road-side stand that runs on the honor system), salt potatoes, Perry’s ice cream and a Friday night Fish Fry dinner at the LB Grand. And then I wouldn’t eat for a week!

9. What restaurant would people be surprised you’ve never dined at? This is a tough one. I’ve been to a lot of places once, often because a friend says “I can’t believe you haven’t been, we have to go”. Still, some may be surprised that I haven’t made it to Leo’s Greek Castle. I love breakfast, perhaps more than any other meal, but somehow I just haven’t made it there. I’m happy to hear the new owners are doing a great job and am going to try to get there soon.

10. What food celebrity would you like to have dinner with? Lee Anne Wong. I first “met” her when she was a contestant on Top Chef and I’ve continued to be a fan ever since. She loves food, is incredibly knowledgeable and, I imagine, full of a ton of stories from her work and travels. She seems pretty laid back too, so I think she’d be a lot of fun to share a meal with.