Pie, Pregnancy and The Pizzeria

Being pregnant is funny in that people say and do the weirdest things to you, things that would normally never happen. Touching, unwelcome advice, comments about your general size, and asking personal and invasive medical questions. Some people don’t mind these things so much. But me? I’ve been known to do a little internal eye-rolling. I know people mean well, but it’s weird when they stop treating you like a regular, fully autonomous adult. The one thing that I have found that is nice though, is everyone in the world enthusiastically tells you “you’re eating for two!” and nobody bats an eye when you eat dessert with every meal or just eat tater tots for a couple of days straight. Now, while I know that “eating for two” is really kind of nonsensical and you only actually need a few hundred extra calories, who am I to argue with folks who want me to eat ice cream? So, it works out great that as I plowed right into the third trimester, The Pizzeria kicked of their annual February Pie Month. Timing couldn’t be better.

When The Pizzeria announced pie month and then posted their calendar, I said “Wouldn’t it be funny if I ate every single pie during pie month?” and because I’m not a normal person with a sense of how to act right, what started out as a funny thought became an actual thing.

Before we go any further, here’s a complete calendar of days/pies: 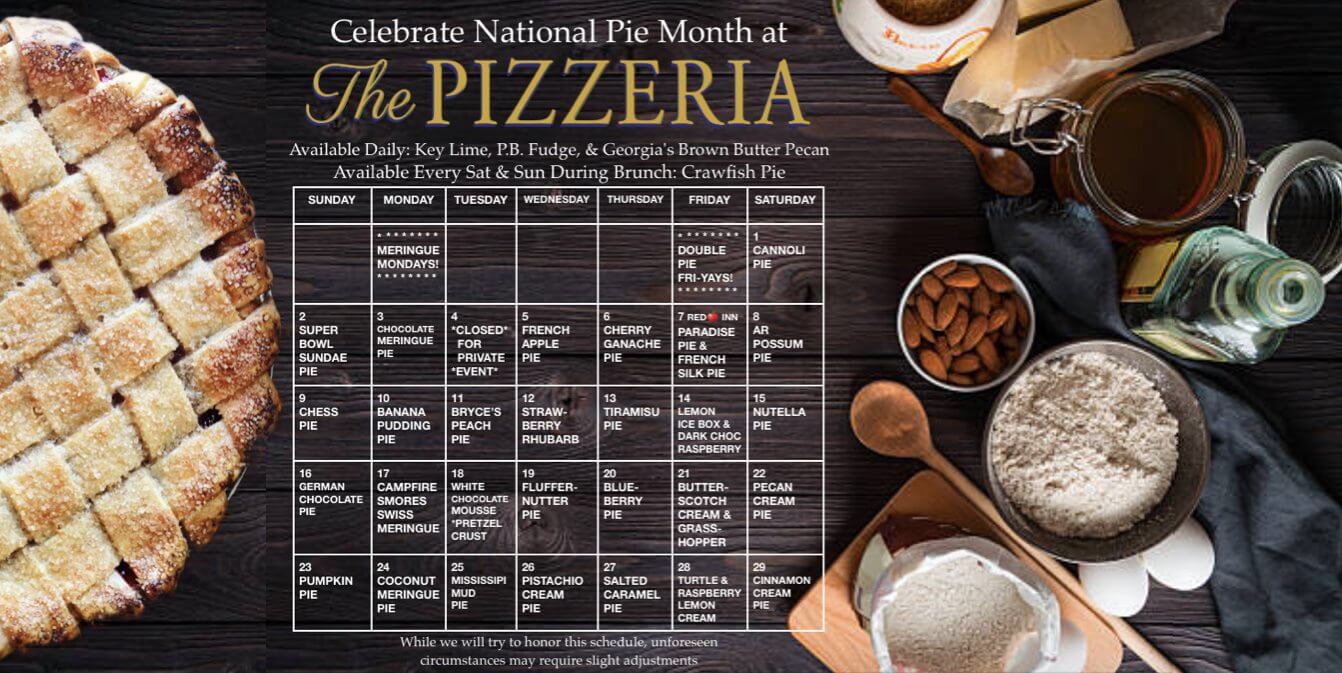 So, after 20 pieces of pie, I have to say that I’m shocked, but I have genuinely liked every single one. Now, there are definitely some that I have liked less because of personal preferences. For instance, I hate cherries in basically all forms. I like one of those cheap cherry cordials candies at Christmas time because it reminds me of my grandpa, but other than that, cherries can take a hike. So, I was less than thrilled about the Cherry Ganache Pie on the 6th, but as it turned out, it wasn’t the gross bright red, jelly-ish fruit pie I was dreading. It was richer and had a significantly more complex flavor than I was expecting. We ate the whole piece and enjoyed it. Pleasant surprise.

For the sake of brevity, I’ll just tell you that my top 3 favorites so far have been: French Apple, Paradise Pie, and Banana Pudding Pie. It’s really hard to make that list though, because they have all been really top-notch good. The pie crust is always excellent, and the whipped cream is something you’d hope to eat by the gallon if you could. I love apple pie, even the really cheap stuff, but this one is STUPID GOOD. Even my husband, who is not the pie enthusiast I am, said “oh damn” after taking a bite of this French Apple Pie. The Paradise Pie has everything I love, salty, sweet, whipped cream, coconut, lots of texture. I will order it every time it’s available. The Banana Pudding Pie is the definition of a comfort food. We even ate it two days in a row just because we could.