Monthly Feature
We’re never quite sure where Natalie will end up each month!

There isn’t much to do in Fayetteville, North Carolina. Thousands of soldiers and their families come through here every year from training, and just as many civilians filter in and out for whatever it is civilians do… Downtown is historic, quaint, and exactly what you would picture a sleepy Southern small town to have; red brick buildings, mild traffic and shops lining the street. Lido’s caught my eye immediately – set right by the traffic circle, they offered outdoor seating, and when I noticed the “Russian and European Food” sign, I bee lined my way in.

The setting was a typical, small restaurant setting. Tables, a bar, and pictures of Europe that looked like they could have been lining a travel agents’ office. I wasn’t bothered by this at all, especially after reading the reviews. Apparently Lido’s has highly touted happy hours, $1 nights, karaoke nights, and a slew of reggae and hip hop nights; which would explain the minimalist décor. It didn’t look like a dump, but it also wasn’t the Ritz.

I came in well after the lunch rush was over, and I felt like a bit of a straggler. Service wasn’t bad – the waitress was super friendly, and was happy to recommended certain dishes. A variety of Russian food stared me in the face, and it dawned on me that I’ve never had Russian cuisine. I was stuck between the goulash (beef tips in goulash sauce over your choice of noodles, rice or mashed potato) or golubsti (ground beef/pork in a cabbage leaf in a veggie stew served with mashed potato and sour cream) and eventually went with the goulash with mashed potato. 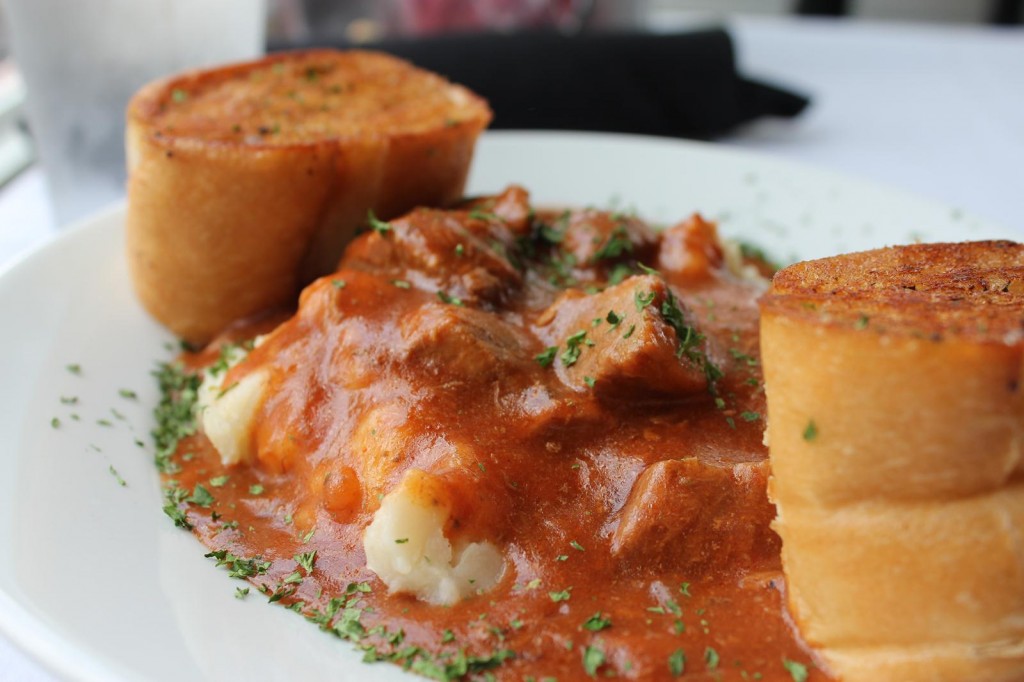 When the meal finally came, it was almost like sensory overload, in the best way possible. The dish looked and smelled absolutely delicious; the sauce covering every inch of mashed potato with the beef tips sticking out like little morsel mountain peaks. My heart sank a bit when I saw my plate accompanied with two giant bread rolls – being gluten intolerant, I shouldn’t really eat this stuff, but in the back of my mind I knew I had to at least try a little bit of it. The goulash was downright amazing. You can tell everything was made from scratch; the potatoes steaming, the beef tender, and the sauce hot and the perfect amount of spicy. I finished the meal, but absolutely had to try the bread dipped in leftover goulash sauce. At that point, my taste buds died and went to heaven. I haven’t had regular bread in months, and it seemed to have melted in my mouth. I’m pretty sure the bread is a type of cinnamon bread, but not overwhelming. Different, but I would not have had it any other way; the sweet of the bread mirrored the spicy goulash sauce almost elegantly. When is plate licking going to be become socially acceptable, I mean REALLY!? 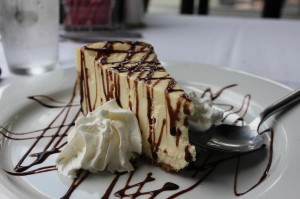 Options for dessert included German chocolate cake, “All Over” chocolate cake (I’m assuming this is a death-by-chocolate kind of thing), and raspberry or regular cheesecake. I ordered the cheesecake, and again, Lido’s did not let me down. While this wasn’t a huge “let me Facebook/Tweet about this immediately” event, it was pretty darn good. For all I know, it came out of a Sara Lee box in their fridge, but cheesecake is cheesecake – and pretty hard to mess up. Either way, I left there with a full belly and an urge to nap.

The main dish was about $11, and a kid’s dish was just $5. I don’t know how much the cheesecake cost; but the bill was not outrageous by any means. My visit at Lido’s was pretty spot on, and before I leave I would like to go back.