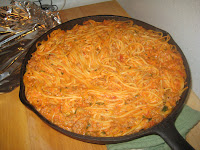 Think of this recipe as a culinary canvas…it’s a good starting point, but you may want to change things up a bit. I’ve made it before, and followed the directions and ingredients precisely. It tastes great, but it’s WAY unhealthy. If you don’t want your family’s hearts exploding…try these suggestions:

YUM!! I’m not sure if you have a lot more healthy recipes of your own that you make, but if you do, you should send them into this contest I know of that’s making its way around the country, the Aetna Healthy Food Fight. It’s coming to San Antonio on October 2-3 and Houston on October 9-10! I noticed your recipe and thought you would be interested. You could get great exposure for your recipes and meet celebrity cooks (Bobby Flay, Sunny Anderson, Sara Moulton, or Cat Cora). All you have to do is go to healthyfoodfight.com to submit one of your healthy recipes. Deadline to sign up for San Antonio is September 15th and Houston is September 22nd so hurry! Good luck if you decide to enter, and if not, keep posting! 🙂