Strange things happen in food. Yesterday, I was supposed to eat at Rosalinda’s in NLR with my buddy, WooPigFoodie.

Turns out Rosalinda’s is the only restaurant on the planet closed on Wednesdays, something I realized only after sitting in the restaurant’s parking lot.

But we caught a break. As I was driving to Rosalinda’s, I noticed a place in the corner of my eye that was recommended to me last week called Las Delicias.

It was noon on a Wednesday as we walked through the small, fairly empty grocery store to an area in the back with 4-5 tables. We were handed a menu that included a variety of tacos, burritos, quesadillas, tortas, and soups. I originally decided on a torta, but was told that no bread was available, so I opted for the al pastor burrito and one each of the barbacoa and asada tacos. Woo, a lover of menudo, went with … the menudo, a fiery bowl of red broth filled with tender chunks of beef stomach. Yummy.

To say my burrito was great is an understatement. All the usual suspects–marinated pork, rice, beans, tomato, and sour cream–resided inside the fresh tortilla. I scarfed it down within minutes, only willing to give Woo one little bit. Maybe the burrito being so good took away a little luster from the accompanying tacos. Don’t get me wrong, I had no complaints other than the tortillas possibly needing to be a tad fresher. But there are better tacos out there to be had, IMHO. Places like Taqueria Karina and El Torito have Las Delicias beat, at least on this day.

But that’s not a bad thing. That burrito will get me back through the door … and soon. Word on the street is that the restaurant also serves a mean ceviche. 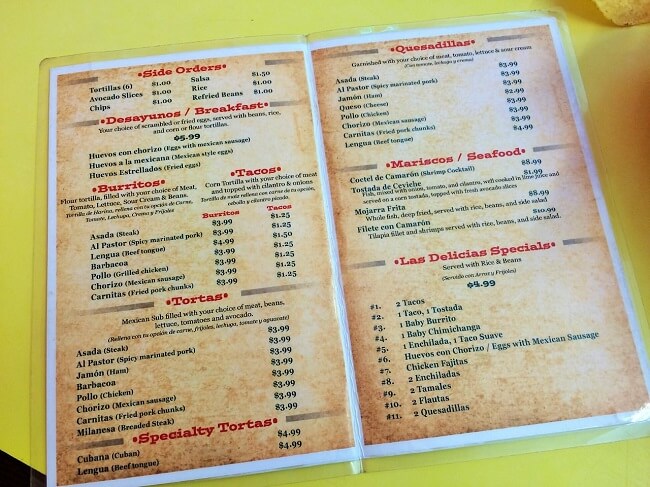 You gotta try their tamales.