He Said, She Said: Giacomo’s 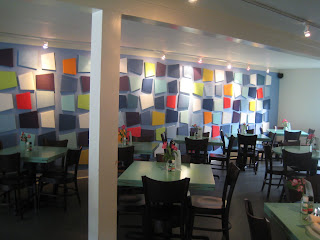 Monthly Feature
It’s near the end of the month…and guess what’s due…another He Said, She Said for Carrie and me.

Here’s how it works:

He Said Atmosphere: (5) Star
Beautiful, bright colors abound. Giacomo’s had a hip, modern feel—while maintaining some old-school charm. I did take-out and was enamoured with the products available for purchase at the front of the restaurant. I loved the open kitchen, side bar, gelato counter, and chalkboard menu.

She Said Atmosphere: (4) Stars
Comfortable is the best way to describe the atmosphere at Giacomo’s. Bright, casual and simply decorated interior. Chalkboards with the menu and extensive wine offerings line several walls, but these items are also listed on a printed menu (take note, Café Rabelais). Nice outdoor patio, but since it faces Westheimer, it could be noisy.

He Said Menu Selection: (5) Stars
Giacomo’s switches things up with a counter, food fast, and slow menu. I liked the concept, if for nothing else, it was different. I was a little short on time so I went with the food fast menu. Excellent selection of pastas, salads, sandwiches, and wines.

She Said Menu Selection: (4) Stars
Lots of options organized by the amount of time you have to wait…I like the concept! Counter items include antipasto dishes, soups, sandwiches and crostinis, “food fast” includes meat and cheese plates, salads, and a variety of pastas, while the “slow food” adds main course proteins, such as chicken, pork, rainbow trout and steak. Extensive wine list.

He Said Taste: (5) Stars
I got an order of the Tagliatelle alla Bolognese, Tagliatelle Giovanni, and a lemon tart—and drove home fast. The smells in the car drove me crazy. Getting take-out was a true test. Could the food withstand the lag time and still hold its quality? The answer was yes. Sara ate the Tagliatelle alla Bolognese, but I had a bite…awesome. It was well seasoned and I loved the flat noodles. My dish (Giovanni) was one of the best pasta dishes I’ve had in Houston. Creamy, but not too heavy—the chicken was moist and flavorful, and the veggies were nothing short of perfection. The brussel sprouts, sweet red peppers, and cauliflower stood out. Again, Giacomo’s use of flat noodles was a great choice. The lemon tart was, for lack of a better adjective, lemony. That’s a compliment.

She Said Taste: (3) Stars
I ordered the Gamberi Piccanti, described as “spicy shrimp salad in toasted baguette” and a house salad to go. Concerned that my sandwich may loose some of its appeal by the time I got home, I opened the container for a bite in the parking lot. Bad move. While the flavor of the shrimp was deliciously spicy, my sandwich was swimming in an unappealing pool of oil which proceeded to run down my arms, sending me digging for a napkin, tissue, baby’s burp cloth…anything to sop up the thick oily mess. The benefit? My steering wheel won’t need Armor All for the next six months. Once home, I could really delve into my dish. The baguette on which my oily shrimp were served was chewy and delicious. As you can imagine the bottom slice was soggy, but still…delish. The potato salad, which was in the same take out container as the sandwich, was also tainted by the dreaded oil. Regardless, the flavor of the potato salad was not really my thing. I’m more an American potato salad traditionalist and this caper-olive-vinegar version was just a bit too worldly for my liking. However, if you like a Mediterranean flavored potato salad this would be right up your alley. My side salad was nothing to write home about, but the shaved fennel on top was nice. I would have liked to try the green goddess dressing, but the vinaigrette was packaged up for me.

He Said Service: (5) Stars
I chatted with the owner Lynette while I waited for my food. She was very friendly, and even offered to get me something to drink while I waited. Nice touch. My food was out in fifteen minutes, packaged well, and ready to be consumed.

She Said Service: (4.5) Stars
Given the fact that I was just taking my food to go, the service was exceptional. The gentleman working the counter offered me a printed menu so that I didn’t have to squint to read the wall version. I was also offered a drink while I waited. I was told the wait would be about seven minutes and I don’t even think it was that long.

He Said Pricing: (3.5) Stars
The prices were a little high for pasta dishes, between $12-13. But location matter, and you gotta pay the rent…so the relatively high prices came as no shock. I will say that my dish was well worth $13.

She Said Pricing: (3) Stars
Maybe this is typical River Oaks pricing, but $17+ for a 4” sandwich, a little potato salad and a side salad seems a bit steep to me.

He Said Overall Opinion: (5) Stars
I loved Giacomo’s. I am definitely going back and probably ordering the same thing…which I almost never do. It’s hard to imagine that I am looking forward to eating brussel sprouts…but I am.

She Said Overall Opinion: (3.5) Stars
Maybe I just ordered wrong…From the moment I walked in I wanted to love this place. It has a good vibe and the service was above average. But my $10 little shrimp sandwich missed the mark and my expectations led me astray on the potato salad. If I were in the area I may give this place another shot, but I probably wouldn’t make the drive over to the Oaks for another go round.