He Said, She Said: Feast

Monthly Feature
Mondays are dedicated to restaurant reviews. This week, you get two opinions for the price of one. Time for another He Said, She Said for Carrie and me.

Here’s how it works:
* For the first time ever, we went to the restaurant at the same time.
* It’s our first time eating at the restaurant.
* We read no previous reviews.
* I wrote the review, and Carrie reacts.

Atmosphere: 3
Feast was a charming, converted house located on Westheimer. Decorations were sparse, but the classic accents (stained glass windows) gave the place a nice, homey feel.
The React: 4
I really liked the “less is more” approach to the decor. This place is cozy and gave you the impression that you were about to eat some delicious, simply prepared food.

Menu Selection: 4
Feast is all about offering various eccentric dishes that you wouldn’t normally find in restaurants. They had a nice selection of appetizers and diverse entree options. The menu changes often, but there are “Feast Favorites” that are standard to the menu. Good selection of various meats, but probably not the best place for a vegetarian.
The React: 3
Although there is a variety, the menu felt a little like variations on the bizarre. I don’t think that I am a picky eater…maybe not very adventurous, but not very finicky, and only 3-4 entrees I even considered ordering. The soups sounded yummy though.

Pricing: 1
Feast has several accolades under its belt. With that, usually comes higher prices. Factor in unique ingredients, along with it being a smaller restaurant in a trendy part of town, and you’ve got the perfect recipe for higher prices. For example, I paid $25 for pork cheeks.
The React: 1
I agree. The pricing was sort of what I expected given the hype, but after eating, I could think of several things I’d rather do with that $80.

Taste: 2
My pork dish was well above average. The meat was very tasty and tender. The sides were excellent as well. The problem came when I sampled my co-diners’ meals. Warren got the barracuda. As exciting as the fish was to talk about before it arrived at the table, it was just as boring to eat. It was a mild fish, cooked well…but severely lacking in the taste department. Plus, with all the bones, it looked like a bitch to eat. Carrie ordered the fish and scallop pie. This was a complete train wreck. One bite was all I needed and wanted–thick and again, tasteless. Sara ordered the liver. I have an aversion to liver, so didn’t try any. I overheard Sara use the word “Luby’s” in describing it. Almost forgot, we ordered the scallops and the meatballs for appetizers. Both were not good. Scallops didn’t taste like scallops and the meatballs were dry.
The React: 2
Again, in agreement. Nothing was particularly bad, but everything was sort of bland and lacked any oomph. My fish and scallop pie had the potential to be delicious. A layer bubbly, browned cheese covered a layer of mashed potatoes and then the main filling. Unfortunately, that was where the love affair ended. Nothing had any discernable flavor. And the barracuda Warren ordered? The bared teeth were the most exciting part of that dish. Tender and well cooked, but seriously lacking in any herbs or spices. 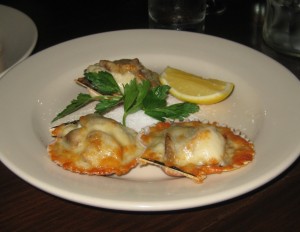 Service: 4.5
Nice, attentive waiter. He did drop water on me, and also a fork during dinner. But I’m not holding that against him. One negative, he said something like: “glad you enjoyed your dinner”. I don’t remember saying that I did.
The React: 4
While the waiter was certainly very knowledgeable, I will hold the dropping of things and his inattention to our actual comments against him. And, although the water was a “refill your own glass with the bottle on the table” situation, I would have appreciated him refilling the glasses. After all, it’s the little things…

Overall Opinion: 2
I probably over-hyped Feast. I was very excited about going (it was on my Houston restaurant bucket list), but it just didn’t live up to the expectations. The prices were way too high, the taste was way too low. I won’t be going back.
The React: 2
I, also, really wanted to like Feast. The concept of locally grown/raised food certainly appeals to me…too bad the food didn’t.

That’s a shame. I have heard nothing but good things, so this review was surprising. I’m also surprised to see the Cassoulet taken off the menu, as I had seen good reviews on that.

And speaking of these types of cuisines, I am going to Phillippe early next week to try the cow cheeks and drunken foie gras. I’ll let you know how it is.

I’m actually surprised I had to write such negative things, but on that night, they definitely lacked in several areas–I think the biggest disappointed for me was just the lack of taste in the seafood. Please let me know how Philippe turns out for you. I’d enjoy hearing about it. Thanks!

Bummer 🙁 I hate going to places, with the notion of it being amazing, only to be totally let down.

Natalie, you should see all the accolades on their website…I guess that doesn’t always translate into a good meal. At least not on that night.