He Said, She Said: Shade 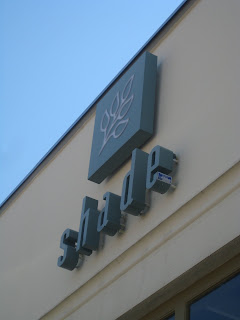 Monthly Feature
It’s the end of the month…and guess what’s due…another He Said, She Said for Carrie and me. Here’s how it works:

He Said Atmosphere: (5) Star
Ever been to a day spa? Shade has that exact same feel to it. Calm colors throughout, with a beautifully simple décor. Last month’s restaurant felt like I was sitting next to a septic tank. At Shade, it was just the opposite. Very clean. A smallish, granite countertop bar sits towards the front of the restaurant. Ironically, the enormous rectangular windows looking out to 19th Street were my favorite part of Shade’s atmosphere.

She Said Atmosphere: (4.5) Stars
The pale green exterior and simple signage is carried through to the interior design of Shade. Dark tables, mostly for groups of four, with white linens litter the dining area. The front of the restaurant has a beautiful “bar” area. Large pendulum lights with shades hang throughout creating a calm, romantic atmosphere.

He Said Menu Selection: (4) Stars
I went for lunch, and I guess the selection could have been bigger…but it certainly didn’t bother me. There was a good number of salads and sandwiches.

She Said Menu Selection: (3.5) Stars
Shade offers a seasonal menu, resulting in a smaller selection. 6 appetizer selections, several salads and soups, and 10 entrees, ranging from a vegetable plate to several types of fish to beef tenderloin. Good wine list and, as an added bonus, they offered Saint Arnold’s Amber for the hubby.

He Said Taste: (5) Stars
Just based on what I ate, Shade is one of my favorite new restaurants (new to me). The food was a complete reflection of the establishment…clean, simple, and good. I ordered the BLT. They cheated a little bit by including fresh mozzarella, but is this really a bad thing? It wasn’t…in fact, it was perfection. The thick cut wheat bread was buttery and toasted …and VERY fresh. This sandwich was a complete work of art. The bacon had that perfect crisp, the lettuce did it’s job, and the heirloom tomatoes were tangy goodness. The sandwich was a decent size as well. It came with a side of napa cabbage slaw and one devilled egg. Note to management…ditch the egg and double up on the slaw. That was some of the best slaw EVER…creamy, just a little sweet, and the red onions and napa cabbage were awesome together.

She Said Taste: (4.5) Stars
One word…delicious! I had the ahi and Warren ordered the lamb. “They” say you eat with your eyes first, and if this is the case, the ahi had me at hello. Beautiful presentation with a tempura shrimp served atop of a bed of colorful stir-fried vegetables (carrots, mushrooms, red onion, scallions) and the ahi perched on a crispy square of jasmine rice. The tuna and the shrimp were both perfectly cooked and combined well with the sweet soy glaze and spicy harissa sauce that were drizzled across the plate. The spicy veggies were cooked well with a little crunch left in them. And, that little rice cake I mentioned? SO good. How can plain old rice made into a cake and crisped on the outside taste so yummy? I don’t know, but it was! The lamb, also well cooked if a tad under seasoned, fanned out on a bed of minted pearl couscous with peas, topped with house-made lamb sausage. The couscous paired well with the lamb, and since I’m not much of a sausage eater, I’ll just have to take Warren’s word for it that it was good. We took an order of coconut cream pie home for dessert. A hazelnut shortbread crust topped with a coconut filling, a huge mound of whipped cream, and toasted coconut…how could it be bad? The crust was amazing and makes me want to try making my own version. My only complaint is that I could have used more coconut filling and less whipped cream, as I would have liked for more coconut-y goodness. The fact that I polished the rest of it off at 6am should tell you how I felt about it.

He Said Service: (5) Stars
The host, in our brief encounter, greeted me like we were longtime friends (and not in a weird way…in a good way). I thought my waitress was very attentive and my food came out in less than ten minutes. I asked her about the name Shade (paraphrasing)…”It’s Houston, you need some Shade.” Right you are my good lady.

She Said Service: (2.5) Stars
To begin, the service was slow (hence our taking dessert to go before our child had a meltdown). While we were seated immediately and served water, our waiter took quite a while with our drink order. After ordering drinks, he turned and walked away, even though we were ready to order our entrees at the same time (we had had plenty of time with the menu!) We were not told of the soup specials and the waiter delivered another table’s appetizers to us. All in all, it left a little something to be desired.

He Said Pricing: (4) Stars
My iced tea and sandwich plate came to about $14 before tip. For that price, it better be perfect…and it was!

She Said Pricing: (4) Stars
On the pricier side, but after eating, I consider it well worth it. Although we skipped appetizers, the portions being delivered around us were quite generous, as were our entrees. Appetizers $8-$15, Entrees $20-$30, Desserts $8.

He Said Overall Opinion: (5) Stars
I think this is my first five-star restaurant since Carrie and I have been doing this. I know my sample size was limited (I went solo for lunch), but I honestly couldn’t find one flaw with my experience. Maybe the egg, but it’s not like it was bad…it just wasn’t the slaw. Great place! I will definitely go back for lunch and dinner…no doubt!

She Said Overall Opinion: (4.5) Stars
This was one of the best meals I’d eaten out in a while. The bold flavors and beautiful presentation of my ahi far made up for any transgressions in service. And, honestly, the slow service probably wouldn’t have bothered me as much if we didn’t have the kid with us. We’ll definitely be making another trip to Shade without him…I’d like another date with that tuna.