He Said, She Said: The Grove 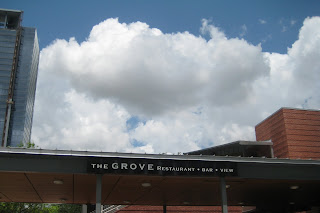 It’s the end of the month…and guess what’s due…another He Said, She Said for Carrie and me. Here’s how it works:

We went to the same restaurant at different times.
• First time eating at the restaurant.
• We read no previous reviews.
• We wrote our reviews separately.
• Once written, the reviews were not changed.

The Grove is one of the many fancy, shmancy restaurants located in downtown Houston. Here’s a few helpful reminders: reservations recommended, business casual attire, and you may want to park next door at the GRB Convention Center.

Atmosphere: (5) Stars
He Said:
The Grove is about as sophisticated as it’s going to get in Houston. Big, open restaurant setting with floor to ceiling windows that look out to Houston’s new gem…Discovery Green Park. Beautiful oak trees (hey…it ain’t called The Grove for nothing) line the restaurant. Inside…the décor is modern, with some retro touches. We sat in a “booth”. I’ve never sat in a more comfortable “booth” in my life. It was more like a mini-sofa that hit me just right in the back. As you enter Grove, you’ll be struck by one of the nicer bars in the city…very elegant. The Grove is perfect for a business lunch or a romantic dinner. We went for lunch.

Atmosphere: (4.5) Stars
She Said:
Beautiful, clean décor with huge windows looking out onto Discovery Green. I loved the simple, chic table settings. Two minor details resulting in the 4.5 star rating…1. The tables were a bit close together resulting in feeling a little like you’re eating dinner with strangers. 2. The hard surfaces and many windows result in a noisy dining room. While we didn’t have to shout, this is not the place to go if you want to have a discreet conversation.

Menu Selection: (3) Stars
He Said:
The menu was fairly limited, but again…when you go to a restaurant of this status, you know going in the menu’s not gonna be an Encyclopedia Brittanica.

Menu Selection: (4.5) Stars
She Said:
Although the dinner menu was not extensive, I found plenty of enticing offerings, including 9 appetizers, 7 salads, soup of the day, a couple of sandwiches and burgers, 8 small plates (4 oz protein and half an order of the side) and 9 large plates (8 oz protein and full side). Vegetarian options available in each category. Wine and specialty drink menus also provided many options.

Taste: (3) Stars
He Said:
My entire meal screamed average. I ordered a wide variety of things and took a few bites off Sara’s plate. I started off with a speciality drink, (can’t remember the name) but it was the best thing I had. It contained rosewater, blood orange juice, vodka, fresh strawberries, and a few other things. Very complex drink and it was refreshing. I ordered the Dustin’s Farm Deviled Yard Eggs. Sounds fancy doesn’t it? Actually, they are average deviled eggs with a piece of Spanish chorizo (very good) and tapenade on top. The flavors just didn’t blend well…I thought it needed a sweet element. My entrée of Pulled Rotisserie Chicken Tacos with sweet black-eyed peas was good, but very small. The chicken was moist, but there certainly wasn’t enough…an almost comical amount of chicken. The peas provided a nice balance to the dish. I took a bite of Sara’s Lamb Burger. It was a little peppery, but not bad. Tasted like a gyro on a bun. We all split the bread pudding for dessert…and I was not too impressed. Had some good elements but they scrimpted on the Mexican chocolate. I did love the finely diced pears on the side.

Taste: (4) Stars
She Said:
We both ordered Caesar salads and small plates. Marinated black cod in a mushroom broth with baby bok choy for Warren, Gulf shrimp and scallop brochette with braised baby carrots, English peas and almond oregano pesto for me. The Caesar dressing with its bit of heat was excellent. Warren’s cod was perfectly cooked and presented in a sea of rich earthy broth. My scallop was perfect, the peas were a nice side and the pesto was delish. The shrimp, however, left a bit to be desired…overcooked and under seasoned. The real gem of the evening was our dessert, the Texas peach and Prosecco parfait. This layered dessert started with a Prosecco gelatin, covered with a peach foam, topped with blackberries and candied Meyer lemon. This is exactly what I love about going out to dinner. Something that you would never think to make at home, but makes you want to figure out a way to do it. It was amazing!

Service: (5) Stars
He Said:
I have not one complaint with the service. Our guy had a good, even-keeled demeanor and did a fine job throughout the meal.

Service: (5) Stars
She Said:
This is where The Grove really shines. Our waiter was very knowledgeable and offered detailed descriptions of entrees and desserts. The staff was extremely attentive (my water glass was never less than half full, Warren’s napkin was refolded when he went to the restroom) yet unobtrusive. It was clear that the staff does it’s best to satisfy patrons when a table next to us needed to accommodate first two, then four, extra diners.

Pricing: (1) Star
He Said:
This was a joke…even by classy, downtown restaurant standards. My tacos hit $12. Bigger portions would have made this price a bit more palatable. I think my drink cost $11 but I need to confirm that. Sara’s burger was $15…ridiculous!

Pricing: (3.5) Stars
She Said:
Given its location, the pricing did not surprise me, but I did feel that it was slightly overpriced for the food that was served.

Overall Opinion: (3) Stars
He Said:
The service, atmosphere and drink gave The Grove a respectable status. I wouldn’t go there to eat again, but I’d definitely stop in for a cocktail. I think this restaurant needs to spend more time trying to raise its food quality and less time writing fancy descriptions for average selections.

Overall Opinion: (4) Stars
She Said:
I would definitely hit The Grove again for drinks, appetizers and dessert. The ambiance and service made this dining experience a treat! Given that it is a bit pricey and my entrée fell a bit flat, I would likely give it another try for dinner, but it would probably not be my first choice.