He Said, He Said: Waffle House

Woo and I will check out a local restaurant, each at different times, and then write separate reviews. This month, it’s Little Rock’s favorite restaurant … Waffle House.

I grew up watching Alice and Happy Days on TV, and so I love the idea of a good neighborhood diner. A place to catch a hot fry breakfast, strong coffee, maybe a burger and fries or a grilled cheese and some soup.

When Kevin suggested we review Waffle House this month, I jumped at the chance. I stopped over at the one on lower Cantrell, below Cantrell hill, since it’s close to downtown where I work.

I have to say that it’s been a good while since I’ve been to a Waffle House. I was quick to pick up on a pervading theme here: everything is thin. Thin waffles. Thin sausage. Thin coffee. I think even I could be thinner, to fit in the narrow booths. It’s a little tight.

That coffee may be thin, but it is all you can drink. I suppose the idea is that eventually you’ll get yourself into a nice equilibrium where your caffeine requirement is reached prior to your bladder bursting, but I’m not sure it’s possible to drink enough of this thin brew to get the level of caffeine buzz I seek.

I had the (thin) pecan waffle with (thin) sausage. The pecan waffle was chock full of crunchy pecans, enough for each bite to have just the right mix of nut and waffle. I would have liked crispy edges to the waffle and had it twice as thick, but it was good with the whipped spread and sweet mapley syrup. Yes, maple-y.

The sausage was nice and meaty, with a good crunch. They have good sausage game here. I can report that it’s even better when dunked in mapley.

Lunch was quite an improvement. I had a very good diner cheeseburger. This one came with American cheese, griddled onions, crispy bacon, some nice cool iceberg lettuce and a fat, juicy slice of tomato. In one word, it was satisfying. I had it with the hash browns, as advertised, and would have liked them crispier. This is a burger I’d come back for again. But I’d like fries with that next time. 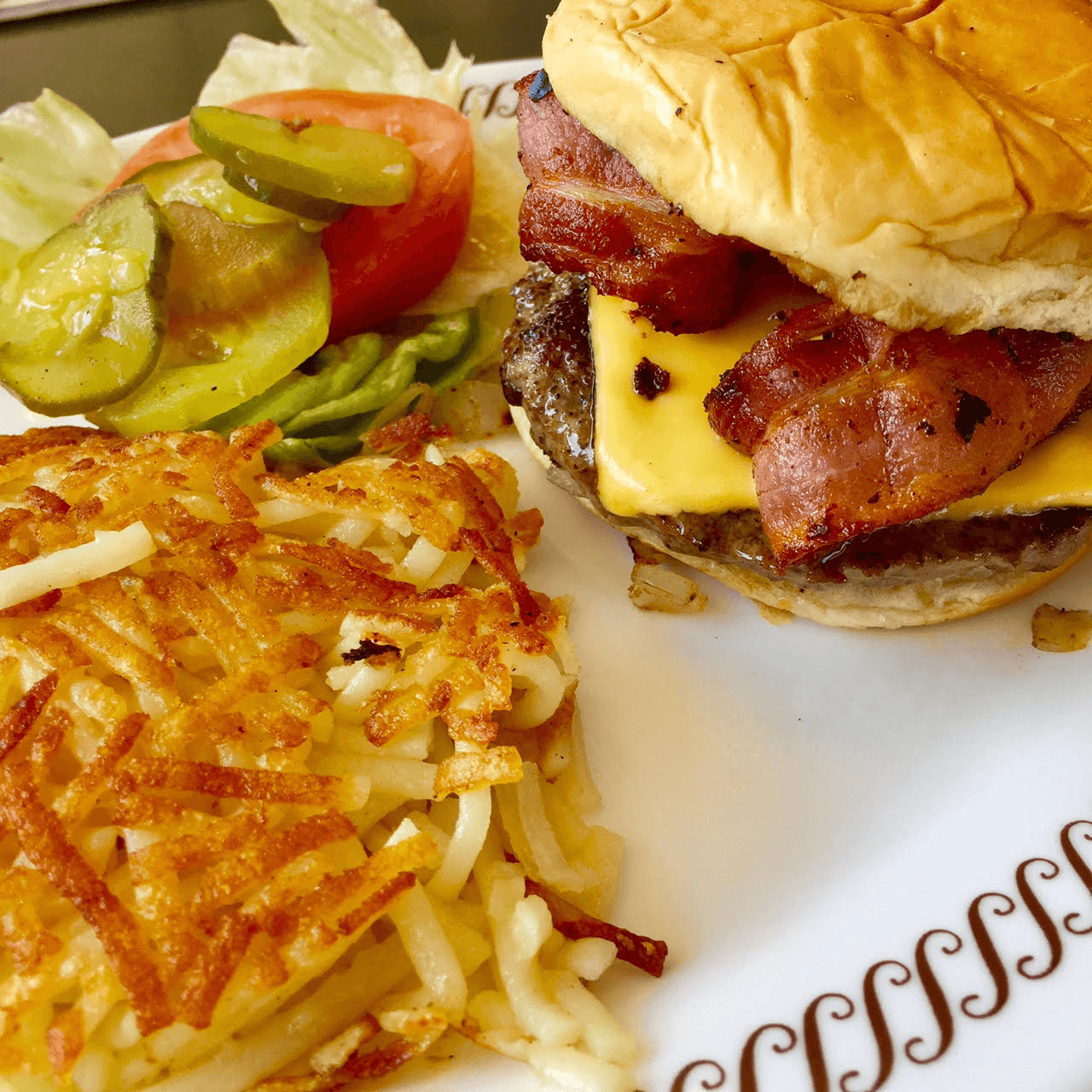 Waffle House has been coming up quite a bit on the blog, and a review of Little Rock’s most beloved, craptastic restaurant chain was long overdue, so here we are featuring it on He Said, He Said.

I recruited my buddy Dax to go with me for a recent lunch at the Riverdale location off Cantrell. This was only my second time at the restaurant in the past 20 years and Dax is a cagey veteran with all things Waffle House. I knew his knowledge would prove to be invaluable.

As we walked in, we were greeted with friendly hellos, which, I must say was a pleasant surprise. The restaurant was clean, bright, and just a nice space to call home for the next 45 minutes. We sat in a narrow booth about 3 feet from the shitter …  Dax’s choice. I think he was testing me.

Anyways, about 10 seconds after we sat down, a server was at our table ready to take our drink order. Five minutes later, we had decided on food. Dax went with the Patty Melt and a side of double hash browns with ham/cheese, along with some extra crispy bacon. I got the Bacon, Egg, and Cheese Melt and a side of hash browns with cheese, onions, and mushrooms (covered, smothered, and capped). And yes, I’m an idiot and had to look down at my menu every 3 seconds to make sure I was getting my Waffle House lingo just right.

Our food arrived at the table within minutes. Impressed again.

Dax commenced to dumping a vat of ketchup on his hash browns. Hell, I love me some ketchup, but this was insane. I think Waffle House lost money just on Dax’s ketchup consumption. But, like always, he knew exactly what his was doing. The combination of crispy hash browns, bacon, ham, cheese, and ketchup was spot-on, as was his classic patty melt. Was it the best patty melt ever? No. The meat was dense and salty and the bread was soaked in butter, but it did satisfy. 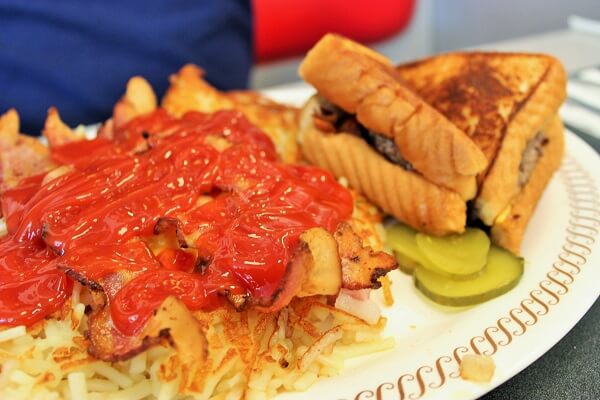 My egg sandwich was the star. I gobbled up my portion within minutes, using the remaining yolk from my over-easy egg as the perfect condiment for the hash browns. My only true criticism of the plate was with the gross, canned mushrooms buried in the hash.

Oh well, obviously, you shouldn’t expect perfection with Waffle House. But this experience really did open my eyes, and I now understand why the restaurant is so cherished in this area of the country. The food was certainly good enough to warrant regular visits and the service was about as good as you’ll find at any restaurant.

If you like your hash browns
Crisp tell them , I like mine extra crispy ! Your reviews are good ! Thanks