My Food Weekend in New Orleans

I finally went to New Orleans … for the first time ever. Can you believe it? After years of procrastination, last weekend’s bro trip with three friends ended the long wait of eating my way through this great culinary city. All told, we visited 16 places … not too shabby. Granted, we only scratched the surface, and after reading this post I’m sure you’ll say, “How in the heck did he not go to this restaurant?”

Here are the places we hit this time around…

Turkey and the Wolf

We stopped here right when we got in, and, truth be told, the first thing we ate ended up being my favorite bite of the weekend. That was the must-order Collard Greens Melt. My Lamb Neck Roti was also delicious, but pass on the Italian American, as the olive/hot pepper/caper cream cheese overwhelmed the sandwich. Turkey and the Wolf had a fast  casual, cool vibe and I definitely will be going back.

We stopped here for a few drinks. Wonderful beer selection but my Old Fashioned was terrible. That said, the mellow atmosphere and good music made The Bulldog Uptown a perfect place to start a Friday night.

I was very excited about LPG, and, in the end, it disappointed. I’m chalking it up to an off night for the restaurant. The creativity was there but just about every dish was a bit off. That included the Steak Tartare, Blue Crab Beignets, Turtle Bolognase, Paneed Rabbit, and an abysmal Pickle Jar that was one of the worst versions I’ve ever eaten. Service was outstanding and the setting was lovely. 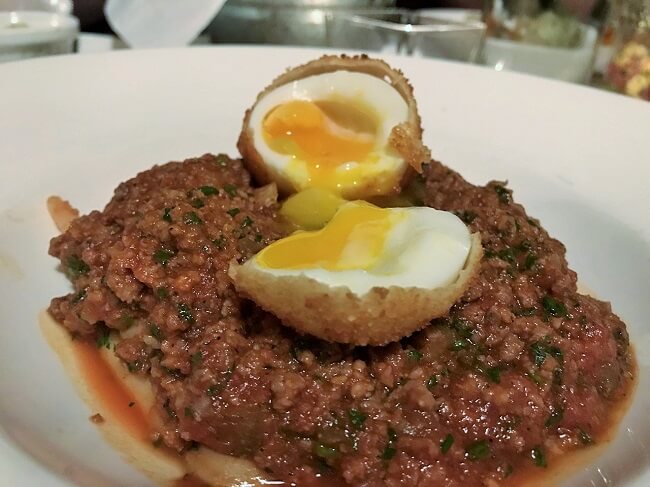 How can you not love this place? No, the beignets and coffee aren’t the best, but Café du Monde is still a must-stop. I got so much powdered sugar on my beard, shirt, and pants that it looked like a bag of cocaine exploded all over me.

Shocker alert! Lafitte’s was packed on a Friday night. I think this place is like the oldest bar in the universe, so I’m glad I got to pop in to say I’ve been there once. At the very least, it was nice to cozy up to the fireplace for a little warmth. Thanks to my friend who parked himself at the bar for 20 minutes, I left with a tasty Hurricane which was delightful for my stroll down Bourbon Street.

Home of the Hand Grenade, Tropical Isle is right on Bourbon Street and a perfect spot to pop in, grab a drink, and listen to a little Zydeco music for a few minutes. Side note, one sip of a Hand Grenade will do me for a lifetime.

Good gracious, District, with its fantastic donuts, cinnamon rolls, and coffee in a very hip setting was just plain awesome. I got the monster-sized Coffee Cake Donut, which probably represents 3/4 of a person’s daily caloric intake. And don’t get me started on the gooey cinnamon roll with the bruleed top. Without question, I’ll be going back to District on my next trip to New Orleans.

I never went inside, nor tried the coffee, but my buddy did and spoke glowingly of it.

Fairly forgettable spot, but we were in need of a Bloody Mary, and COB was close by.

I loved Cochon! Granted, it was far from a perfect meal, but we ordered a lot of dishes, and there were many more hits than misses. The Chargrilled Oysters in Chili Garlic Butter was right down my wheelhouse, as was the Fried Alligator, Pork Cheeks, and Fried Boudin. The Fried Oyster and Bacon Sandwich and Gumbo were both misses. Great service, with a clean, inviting setting, and an outstanding bourbon selection really put Cochon over the top. 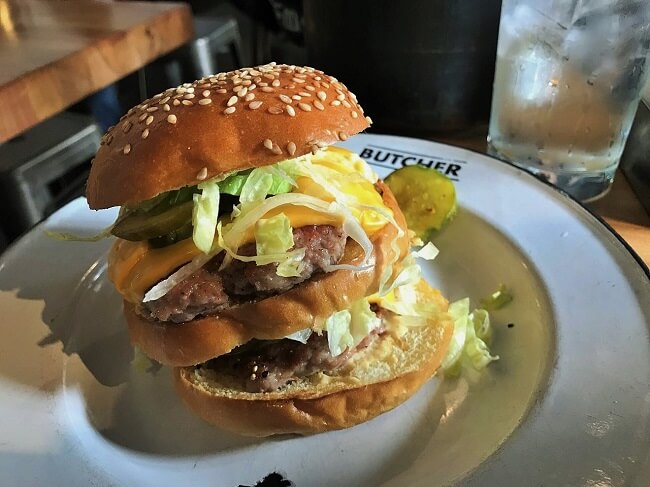 Loved both the raw and chargrilled oysters but everything else, including the jambalaya, gumbo and etouffee were subpar. Enjoyed the diner setting and I’d definitely go back to Felix’s for the oysters.

What’s better than having a Sazerac at The Sazerac Bar inside The Roosevelt Hotel? The answer … nothing. For $17, it better be one of the best damn cocktails ever … and it was. I will never forget sitting in such a classic setting and having a great drink.

We just popped into Café Beignet for a cup of coffee before our ghost tour. The coffee sucked. End of story.

Maypop was by far the most interesting meal of the weekend. How does Hand Pulled Noodles with Blue Crab, Pork Sausage and Spicy Mapo Sauce sound? Or what about a Ginger Crusted Lamb Loin with Green Lentils, and Castelvetrano Olives? Don’t even get me started about the bread service of Annatto Sesame Rolls with Coconut Butter and Shellfish Pepper Jam. Yes, you read that right … shellfish pepper jam. I’m guessing the upscale setting and inventive menu will insure some big-time awards in the near future for Maypop. 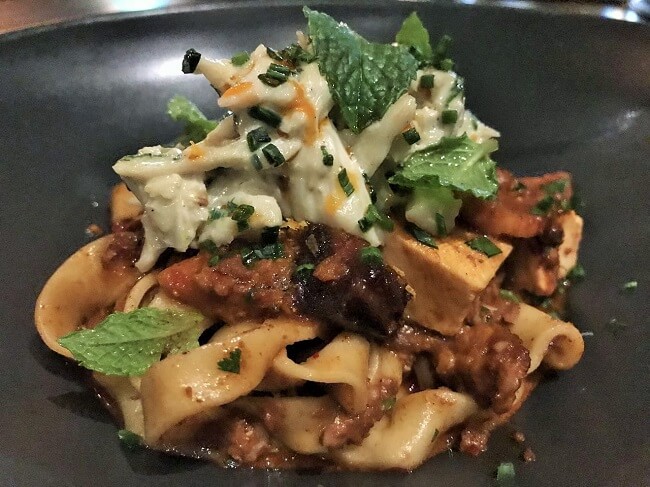 Talk about going out in style. We hit up Surrey’s for breakfast on Sunday right before heading home and the entire meal was wonderful. I got the Boudin with Eggs and Biscuits, but orders of Migas, Bananas Foster French Toast, and Pig’s Head Benedict really stole the show. Portions are huge, so come hungry to Surrey’s.

Glad to see you had some great travel buddies who steered you in the right direction! Laissez les bon temps roule!

my first trip to la peite grocery was a bummer.
overfried apoetizer…forgot the soup.
waiter with an attitude didnt help.
i wont go back..gets so much press?