We are constantly on the prowl for cool products, promotions and events! Special thanks to Stacy for covering this media tasting!

For most of the Summer, Landry’s Signature Group has been hosting private dinners on Tuesday nights at each of their Houston restaurants, with 8 award-winning chefs cooking up multiple courses for hungry dining patrons. This Signature Chef Series had their grand finale last week at Vic & Anthony’s in which all 8 chefs prepared a signature dish, resulting in an unforgettable menu of carefully crafted delicacies and equally inspired wine pairings. This intimate dinner allowed guests to not only mingle with each other, but with the chefs themselves, who after introducing their contributing dish, walked around to engage with everyone and answer questions. In addition to the exclusive menu and delicious food, there was live music, a cocktail reception, and a general relaxed and fun atmosphere. It was a great evening from start to finish.

The first course from Chef Ricky Cruz of Grotto was a “Gamberi con Aragosta” or stuffed shrimp with lobster, leeks and roasted peppers with saffron essence over polenta. The shrimp were plump and the creamy lobster mixture inside was a perfect filling. The polenta was smooth and ever so lightly flavored by the fragrant saffron. Even my dining companion, an admitted lobster hater liked this dish. 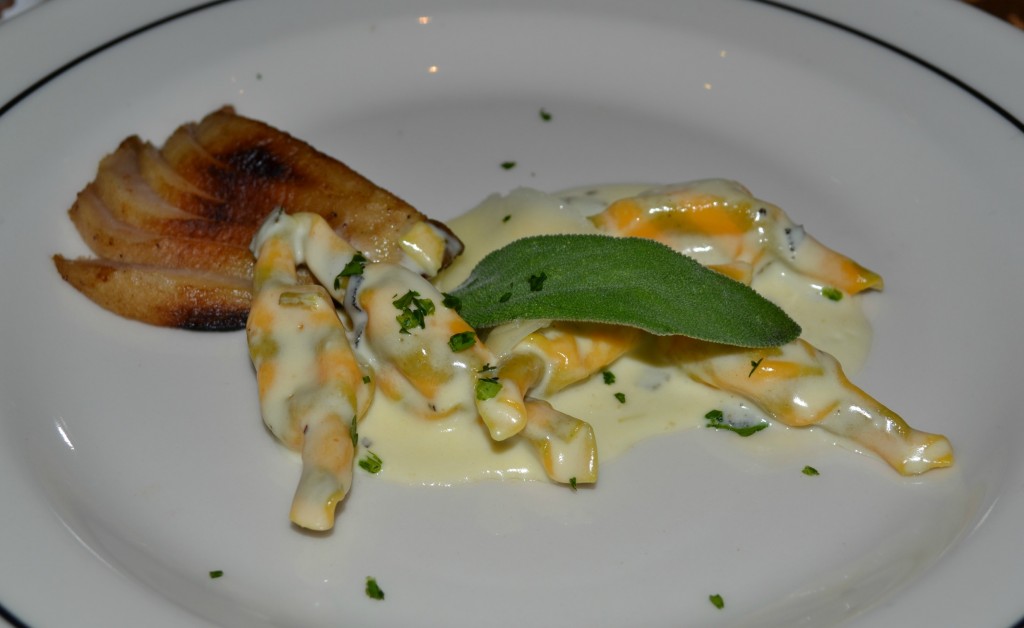 Up next, a pasta dish from Chef Luis Rubio of La Griglia – caramelle pasta stuffed with ricotta and pear with shaved pecorino romano. This was probably my favorite dish of the evening. The caramelle pasta looked just like little candy wrappers and tasted just as sweet as they looked. Cooked perfectly al dente, surprisingly light, and wonderfully sweet with the ricotta and pear. A little bit of shaved pecorino romano was just the icing on top of this great dish that could maybe even double as dessert!

After the pasta came a salad of arugula, himachi ceviche, fennel and crispy parsnips from Chef Mark Holley of Pesce. The himachi was a little too salty for me but the peppery arugula balanced it out well. It was a nice, lighter dish to have in the midst of a rather rich, 8-course evening. 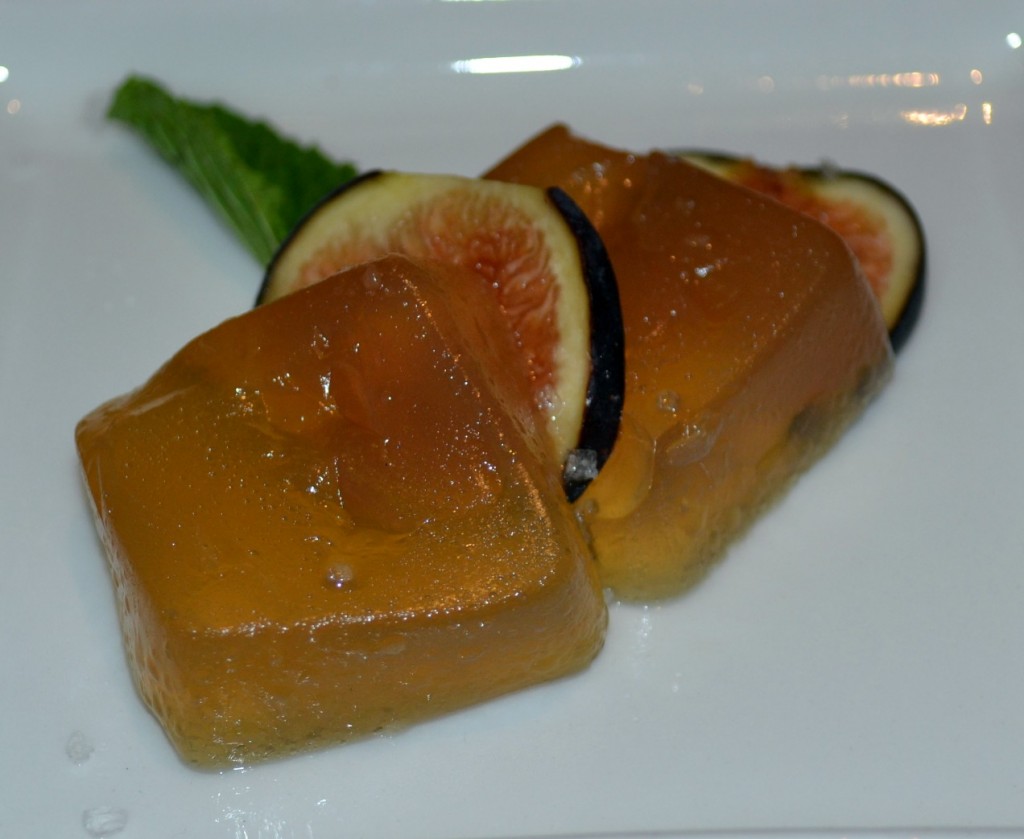 The intermezzo of green tea gelatin with sea salt and fig from Chef Scott Castell of Brenner’s had to be my least favorite item of the night. Besides not liking the texture of jello to begin with, the flavor of this palate cleanser was just off, in my opinion. It was too salty and medicinal tasting. While it was an interesting concept that used ginger infused vodka and sake, I just didn’t care for it and gladly welcomed the next course. 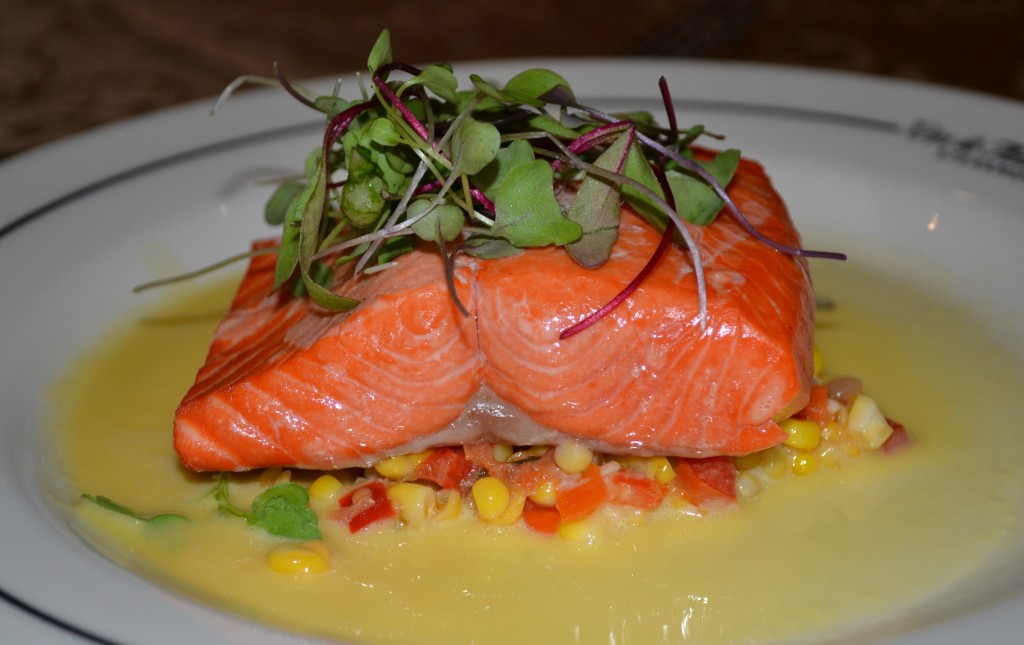 Grilled wild Alaskan salmon, summer corn succotash and saffron butter from Chef Trevor White of Oceannaire. It’s true what they say (whoever they are) in that you eat with your eyes first. And in the case of this salmon, my eyes were pleasantly satisfied. Such beautiful colors that were equally matched by the taste! My only complaint was that my piece was a little overcooked. I ended up mooching off my buddy’s plate, whose piece was absolutely perfect. And the wine it was paired with, a 2008 Soter Vineyards ‘North Valley’ Pinot Noir from California was a great accompaniment. It had some great smoky and floral notes that brought out the great flavor of the salmon.

At this point I was more than a little full, which is why I nearly laughed my ass off when they brought this out… 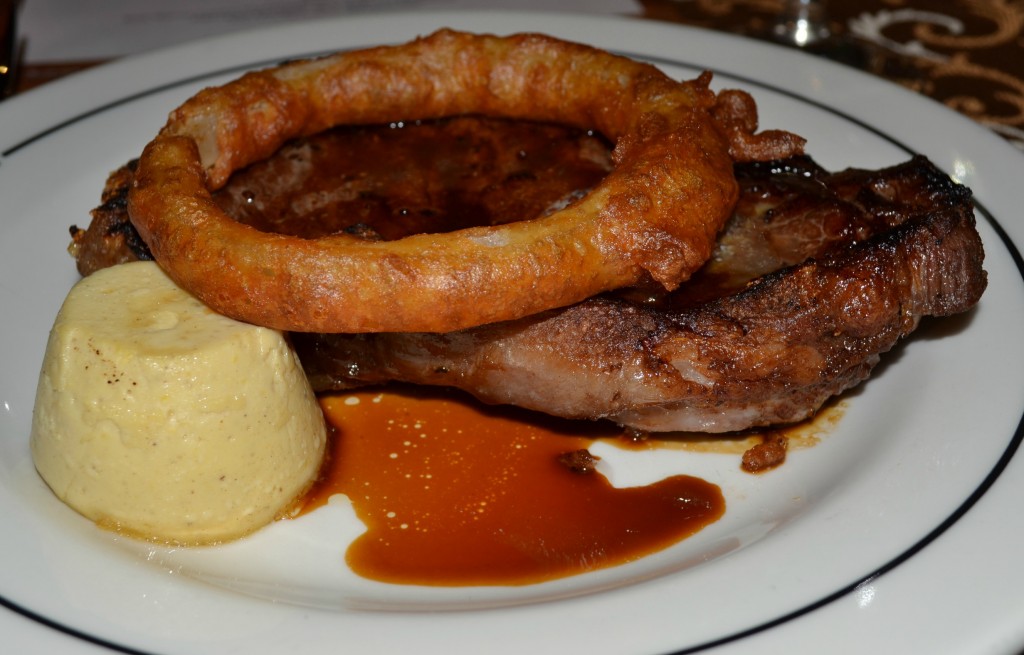 Holy Mother of God. There’s a cow on my plate. This 16 oz. Prime Kansas City Strip with bone marrow custard, masa crusted onion ring, and toasted mustard seed butter from Chef Carlos Rodriguez of Vic & Anthony’s had me channeling my inner Ron Swanson – I’m even pretty sure I sprouted a few chest hairs. And though I’m more of a tenderloin girl (and a 4 – 6 oz tenderloin girl at that), I have to say that this was one of the juiciest, most flavorful pieces of meat I’ve ever attempted to consume. Because you can bet your bottom dollar I didn’t even eat half of that gargantuan piece of meat. Even though it was a little too fatty for me, the rich full flavor made this steak a definite winner. The masa crusted onion ring was also noteworthy – it had a good, crispy crunch that didn’t pull the entire onion inside out when you bit into it (a big pet peeve of mine). It was also almost sweet in taste and reminded me of a deep fried donut! YUM! As for the bone marrow custard, it was certainly interesting with a satiny texture and savory flavor. Definitely not your typical custard! 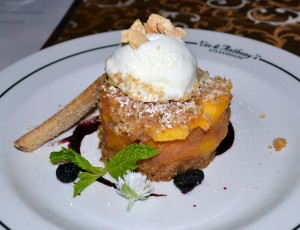 For dessert, Landry’s pastry chef Meagan Edwards introduced her “Peach Brown Betty” – a cobbler-like fruit crisp with black raspberry sauce and amaretto. A small cinnamon sugar dusted cookie and vanilla ice cream topped it all off and was a definite sweet ending to the night. You could tell a lot of love went into this dessert; I loved the big fresh chunks of peaches, the sweet blackberries, and the crumbly top but soft middle of the cake.

Each course was thoughtfully created and beautifully presented. I also have to give credit to the servers that evening who were more than attentive and friendly while dealing with a roomful of people. Although I’m pretty sure most of the customers were rather easy to please as the general consensus that evening was that we were all there for food, fun, and to show our appreciation for 8 wonderfully talented chefs. Mission accomplished.

I really enjoyed reading this. The “Gamberi con Aragosta” looks delicious and so does the Alaskan salmon. There is no way every dish was not made to perfection considering each chef only had to focus on a single masterpiece. I’ve been to an event mighty similar to this one and it is tons of fun. Thanks for sharing!

I gotta admit..that fig and gelatin looks interesting. I would have enjoyed trying it.