This marked my first visit to El Dorado, the southern Arkansas town of 20,000 that’s just an easy, two-hour drive from Little Rock. To say I was excited to finally see the town so many folks have been talking about is an understatement.

With 175 people in attendance, along with celebrated chefs and sommeliers from around the world, the five-course dinner did not disappoint. Service and food throughout the evening were both impeccable, no small feat given the high attendance. Here’s a course-by-course rundown of the menu, complete with wine pairings. 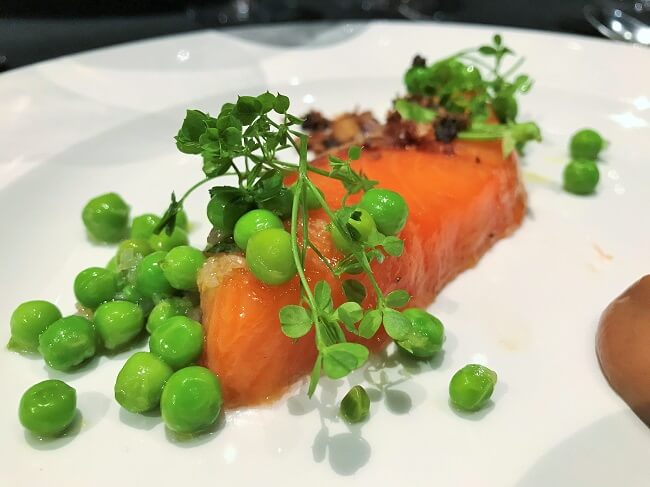 Again, dinners of this size, involving so many chefs, somms, and servers, are extremely difficult to get right. Course timing can lag. Proteins are overcooked. Mistakes happen often. I’ve been to my fair share of these evenings, and I can tell you without a doubt that this was one of the very best. 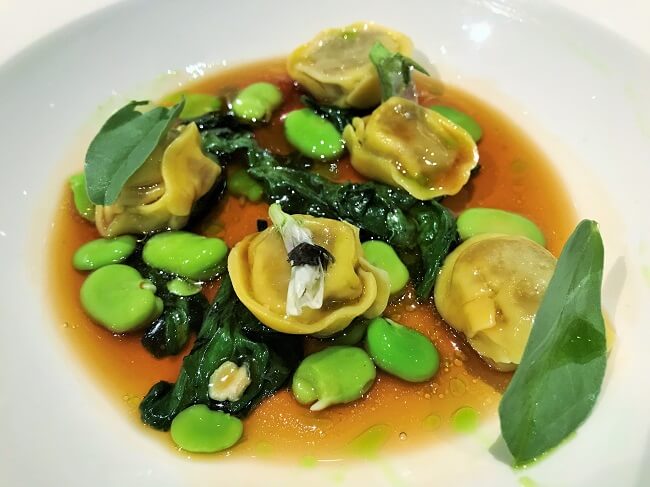 As expected, the sophisticated plating was on full display, but so too were intense, yet balanced flavors and ideal wine pairings. Not surprisingly, Chef Johnson’s third course of smoked salmon, a soft, buttery offering, put a smile on my face. It’s hard for me not to at least enjoy all versions of smoked salmon, but I genuinely loved this one.

The hallmark of any multi-course dinner is a subtle, natural progression. Happily, third course lead to a borderline amazing fourth with Chef Rellergert’s crispy-skinned pork offering that just melted in my mouth. Paired with the 2015 Camino Cabernet Sauvignon, this was the highlight of my meal. 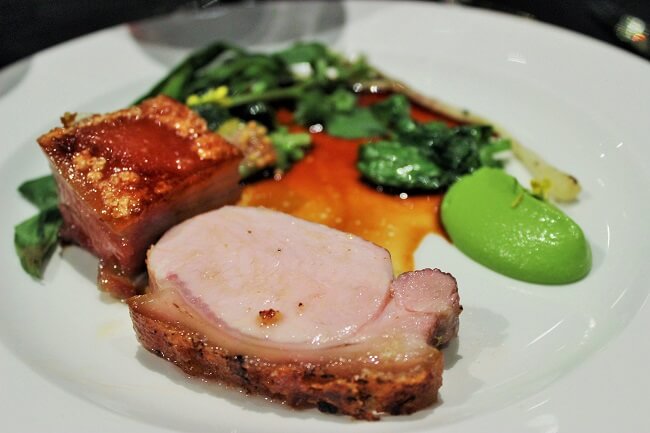 The accolades of chefs and sommeliers are below, but suffice to say that these folks are some of the very best in their fields. Credit to El Dorado for bringing them in. And credit to the town for hosting such a wonderful event. Keep an eye for details on next year’s festival. Believe me, it’s worth the drive down from Little Rock.

Executive Chef of the Griffin Restaurant, and previously at Eleven Madison Park in New York City, Noma in Copenhagen, and NoMad in New York City. Most recently Johnson was Executive Chef of Frenchie in Paris, running three restaurants in Paris as well as Frenchie Covent Garden in London. Johnson is one of a small number of featured chefs at the 2019 Atlanta Food & Wine Festival. Chef Johnson’s recent stint at Frenchie resulted in the restaurant being awarded its first Michelin Star.

Abramson has spent over fifteen years honing his skills in some of the top restaurants in the world; including Noma, Mugaritz, and Blue Hill at Stone Barns. He spent three years on Lummi Island as the Chef de Cuisine of The Willows Inn and was the Executive Chef at Flora Farms in Cabo, Mexico. He is currently the chef at Butterfield Restaurant in Stone Ridge, New York.

Reilly joined upscale farm-to-table restaurant Ninety Acres in New Jersey, sourcing produce from the on-site farm and developing a passion for simple ingredients and refined experiences. He then moved to highly acclaimed Eleven Madison Park, but quickly was elevated by management to Chef De Cuisine at NoMad New York City. Chef Reilly has been awarded a Michelin Star and 5 New York Times Stars.

Born and raised in St. Louis, Missouri, Chef Michael Rellergert has been working in kitchens since he was a teenager. He started his culinary career as Sous Chef at Chez Leon, a classic French Bistro in St Louis. Upon graduating from L’Ecole Culinaire in St Louis, MO, he joined the team at An American Place St Louis and quickly rose through the ranks at Niche Food Group. In 2012, Michael moved to New York to join the opening team at NoMad. He became Executive Sous Chef in 2016. In January 2018, he relocated to California to open NoMad Los Angeles. In the summer of 2018, he joined the opening team of NoMad Las Vegas as Chef de Cuisine.

Adam Purcell was born in Dublin, Ireland in the coastal town of Dalkey. After helping build national parks in Patagonia for the company Concervacion Patagonica by Douglas Thompkins he realized his passion for food and headed straight for the kitchen. After some years in the Bib Gourmand Restaurant Pichet in Dublin, he headed for Paris to work for Frenchie, Rue du Nil. During his time here he worked closely with Chef Austin Brian Johnson in all 3 of the Paris restaurants, eventually running Frenchie Bar a Vins. He is currently Chef de Cuisine of Gregory Marchands larger London outpost Frenchie Covent Garden.

Dustin Wilson is a Master Sommelier based in New York City and co-founder of Verve Wine, an online marketplace for sommelier-curated wines with stores in both NYC and San Francisco. His career spans some of the top restaurants across the US – Frasca Food & Wine in Boulder, The Little Nell, in Aspen; and RN74 in San Francisco. Dustin is best known for his position as Wine Director of the 3 Michelin-starred restaurant Eleven Madison Park. This expertise led him to have a leading role in the critically acclaimed wine documentary, SOMM, and he was later featured in the film’s sequel, SOMM: Into the Bottle.

Over the past 20 years Sabato Sagaria has fulfilled culinary, beverage, and leadership roles at esteemed restaurants and hotels around the country including The Little Nell in Aspen, The Inn at Little Washington in Washington, Virginia, and The Greenbrier Hotel in White Sulphur Springs, West Virginia. He currently serves as president of bartaco, overseeing 15 restaurants in 9 states that embody the beach culture of Brazil, Uruguay and Southern California. In 2012, Sagaria became a member of the Court of Master Sommeliers, a prestigious honor held by fewer than 250 individuals worldwide.

Thomas Pastuszak, Sommelier and Wine Director of the NoMad Hotel

In 2011, Pastuszak took on the role of Wine Director at Chef Tom Colicchio’s restaurant Colicchio & Sons in New York City, and would soon thereafter join the team behind the world-renowned Eleven Madison Park to create The NoMad in Spring 2012. He opened The NoMad as its Wine Director & helped it achieve its 3-Star New York Times rating within a few months of its opening, and now is Executive Wine Director of all the NoMad properties (with new locations in Los Angeles and Las Vegas). Thomas was chosen as one of the Best New Sommeliers of 2012 by Wine & Spirits Magazine, recognized as one of Forbes’ 30 Under 30 in 2013, and was named one of Food & Wine’s Sommeliers of the Year of 2015. Most recently, he launched three exciting new wine labels: Terrassen in 2013, Empire Estate in 2014, and VINNY in 2018, all with a focus on New York’s exciting upstate wine region, the Finger Lakes.

Eric is a former Wine Director for the Mina Group in San Francisco and involved in various wine projects, including Railsback Freres, and assists Presqu’ile Winery with wholesale distribution. One of America’s foremost sommeliers, and a long-time evangelist for the wines of Santa Barbara County, Eric brings a wide and deep knowledge of the wine industry to the selection of the festival’s primary wines. In 2009, Eric joined Michael Mina’s renowned RN74 restaurant in San Francisco, where he ultimately led the sommelier team. At RN74, Eric oversaw a wine list that included a treasure trove of rare Burgundies, including verticals of DRC La Tâche and Comte de Vogüé Musigny stretching back to 1934. In 2012, Eric returned to Santa Barbara County to open Les Marchands, where he contributed to it being named one of Wine Enthusiast’s 100 Best Wine Restaurants. That same year, Eric was also honored as one of Food & Wine’s 2014 Sommeliers of the Year.

Keegan Sparks’ passion for the food and beverage industry began just after college with his first restaurant job at 28 Springs in Siloam Springs. From there he transitioned back to his home town Little Rock taking a job at South on Main and becoming Certified Sommelier while there. Most recently he did a stint in retail wine sales at O’Looney’s Wine & Liquor learning a different side of the industry. Now Keegan is back in the restaurant game as Service Director of the Griffin Restaurant in El Dorado. When he’s not working you can find him cooking with friends or tinkering with his home carbonation rig trying to make the perfect glass of seltzer water. The thing that makes him most excited is traveling to new wine regions and the opportunity to learn first-hand about the wine making process.

*My ticket to this event was complimentary. Opinions are my own.

Thanks for taking the time to discuss that,
I feel strongly about this and so really like getting to know more on this kind of field.
Do you mind updating your blog post with additional insight?