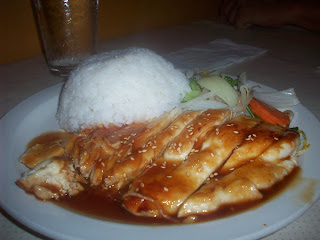 The Background: Since moving back to Dayton, Ohio, I have been itching to go here. Thai 9 is set in the heart of the Oregon District, which is right on the outskirts of downtown. During the day, you can visit art galleries where local artists showcase their work, go to a yoga studio, browse the shops, or even hit up the town’s one and only Indie movie theater. By night, the Oregon District turns into THE place to be, filled with bars, late night bistros and yuppie clubs that your young professionals frequent.

The Scene: Thai 9 is a restaurant that is light on the eyes, dimly lit and very modern Asian in its appearance. You have the option of dining up in the loft area or the upstairs deck outside. Right off the bat, we were met with our friendly waitress who made us a fresh pot of coffee while we went over the menu. This scored points for me, and while it sounds trivial I would much rather wait for fresh coffee and being the coffee snob I am, I appreciate it wholeheartedly. I also mentioned that my mom has a severe sesame allergy, and she assured us that they are more than happy to accommodate. She even remembered this tidbit for dessert!

The Starters: For an appetizer, we ordered a simple California Roll as well as Coco Shrimp. The Cali Roll was just like any other Cali roll, but I am by no means complaining! As for the Coco Shrimp – AMAZING. One thing that IS misleading about this though… I didn’t read the description of this, and by the given name, I figured “oh, coconut shrimp, great!”. It’s not!! Honestly though, once I bit into the wonton fried shrimp, my minor complaint was quickly eradicated from my mind. I usually don’t go for fried food, but this was the right amount of “crunchy”; thin enough to not overpower the taste of the shrimp. The honey mustard sauce, when paired with the strips of shrimp, really sealed the deal. I could have probably eaten 20 of these things.

The Main Course: On to the entrees – My dad ordered the Chicken Teriyaki, my mom the Cashew Nut and I the Singapore Noodles. Both my mom and I had to pick a “spice level” on a scale from 0-10; we picked 0 and 3, respectively. We also had the choice of soup or salad, and we all chose the Miso soup. Again, just your regular run of the mill Miso Soup but I could very well have had another bowl. With both a Cali Roll and Miso Soup – they’re hard to mess up, but they’re also hard to better; so take those reviews lightly! During the meal we were all silent [a good thing!], with nothing but a few “mmmm’s” and “oh man’s” muttered. The Cashew Nut dish had a great taste of sweet from the pineapple and also a minimal bite from the red pepper. The Chicken Teriyaki was pretty darn good, and the sauce was so good that my dad was mixing his rice with it. He picked at the veggies, but only because they “are too damn healthy”, left apart from the meal as a personal preference. I should also mention that they are vegetarian friendly, which is a plus in my book as well. I usually don’t eat meat, but felt compelled to get chicken with my noodles. When this dish was first put in front of me, I was pleasantly surprised. Surprised, at the fact, that they’re wasn’t a HUGE plate of food, with ingredients falling off at every corner. The spice level I picked was the best I could have asked for, and was coupled with the yellow curry perfectly. The vegetables and chicken were in proportion to the amount noodle, and I had a bit of everything in every bite. While I ate the entire plate, I could have definitely had more… no need to mention that I was already full and by that point I would just be indulging in gluttony!

The Grand Finale: While my two partners in crime were too full to even think about dessert, I dove in headfirst. From the moment I saw the description I knew I had to have the “FBI”. While I don’t know why it’s named that, I can’t really say that I care! Handmade coconut ice cream drizzled with honey, accompanied by fried bananas, sprinkled with sesame seeds [of course, said seeds were excluded]. This was, BY FAR, my favorite part of the Thai 9 experience. While I was full from my main course, I made room for this the second my lips hit the spoon. The perfect marriage of hot and cold, of sweet [banana] and slightly bland [the friend wonton around it]; I could have easily embarrassed myself had this dish been made for than just one person. My dad didn’t partake, as he is not a coconut fan. My mom thought this was too sweet, but we came to the conclusion that this was in part to the sweetness of her dinner. Another reason as to why this dessert was a bonus for me – it knocked off the slight edge of spicy that my meal had. I also noticed that after the meal, I didn’t have the dry mouth affect that you usually get when eating oriental food. Well my friends, this is because Thai 9 has your health in its best interest, and they do not use MSG.

The Verdict: All in all, this was a definite “10 out of 10” meal for us. It’s affordable [think $8 entrees], in a great place downtown, and if you DO indulge a little too much, you could always walk it off! I haven’t been to dinner here in awhile, but I would venture to say that their menu offers a wider variety of delectable dishes. By no means am I saying that there wasn’t enough on their lunch menu, though. If you are ever in or around Dayton, Ohio for any reason at all I would say that this restaurant is a place to go.

Thanks so much to Natalie for writing such a wonderful review!