Monthly Feature
Got a sweet tooth? Carrie has you covered!

While preparing for Thanksgiving, I was on the hunt for a new apple pie recipe. Despite my best efforts, making a two-crust pie look pretty is always a challenging, so when I ran across this recipe, the lack of a top crust appealed to me. Although the abundance of reviewed recipes on the internet has resulted in the abandonment of many of my cookbooks, I took a chance on this recipe. Am I glad I did! I will admit that I made a test pie before the big day, but both times, the pie was so easy and so tasty. Another confession…I used a “cheater” pie crust AKA Pillsbury. I have included the crust recipe included in the cookbook, if you feel so inclined. Either way, this one is a definite keeper!

Combine the flour and salt in a bowl and toss together. Add the shortening. With your fingertips, two knives, or a pastry blender, blend the ingredients, working quickly, until you have a mixture of tiny flakes and bits about the size of coarse bread crumbs. Sprinkle on the water 1 tablespoon at a time, stirring gently with a fork after each addition. Add just enough water to form a rough mass.
With floured hands, pat the dough into a smooth disk. The dough is now ready to use. This dough does not need to be chilled, although for convenience, it may be wrapped in plastic wrap and refrigerated for up to 2 days.

Roll out the pastry and line a 9-inch pie pan. Bake the crust partially until the pastry looks dry but it still very pale, about 10 minutes.

To make the filling, peel, core, and cut the apples into small pieces. Combine the apples and water in a saucepan. Place over medium heat, cover, and cook, stirring and mashing occasionally, until you have thick applesauce, 20-30 minutes. A few small lumps are okay. Remove from the heat and pour into a large bowl. Let cool for 10 minutes.

Preheat oven to 425˚. Melt the butter in a saucepan. Add the sugar, eggs, cream, cinnamon, butter and salt into the applesauce and mix thoroughly. Pour the apple mixture into the cooled pie shell and place in the oven.

Meanwhile, in a medium bowl, combine the butter, brown sugar, oats, flour, almonds, and salt. With your fingertips, rub the ingredients together until the mixture resembles coarse crumbs. After the pie has been baking for 15 minutes, rapidly sprinkle it with the oatmeal mixture, then reduce the heat to 350˚ and bake until filling is set, about 30 minutes longer.

The taste: This treat is like a cross between apple pie and apple crisp. Although it doesn’t have nutmeg or allspice, I found the subtle cinnamon to be enough spice for me. The crunchy topping is a perfect contrast to the creamy apple filling. Top with a scoop of vanilla ice cream (yes, it was Blue Bell) and it’s heavenly.

The ease: Again, because I hate dealing with pie crusts, this recipe was a dream to me. The most time consuming part was peeling, coring and chopping the apples and that still took less than 10 minutes.

The fat-assness: Let’s not talk about it. It was a holiday, for God’s sake. Just let me enjoy it.

The cleanup: 2 bowls, a saucepan and the pie plate. If you make your own crust, there will be one more bowl, but you’ll be cleaned up before the pie ever comes out of the oven. 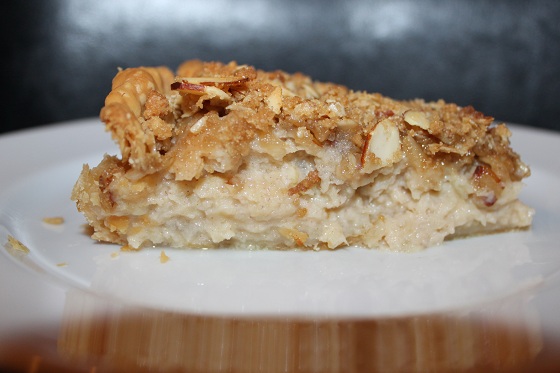 The verdict: This is a fantastic holiday dessert and a great alternative to the generic apple pies that usually show up as part of the spread. Dividing this recipe and making individual pies would also be a great end to a dinner party.

The tip: This pie is best when it is allowed to return to room temperature, or slightly warmer, before serving. Although dishing it out right out of the oven is delicious, the filling does not set up well when hot. But, if you just can’t wait to dig in, it will still be amazing; it may just be a little messier to serve.

This pie is awesome!