We are constantly on the prowl for cool events!

Big Orange Midtown kicked off its “Supper and Spirits” dinner series this past Monday night. The four-course whiskey dinner, a collaborative effort with High West Distillery, was held in the mezzanine section of the restaurant. I was joined by the lovable dynamic duo of Kelly and Erika Gee (along with 20 other guests) for what proved to be an amazing night of food and drink.

Our first course was a plate of ricotta gnocchi (with osso bucco, local carrots, and white truffle butter), paired with a NY Sour (silver rye, lemon juice, and a cabernet float). Both the drink and dish were spot-on for a first course. The pasta was light, fluffy, and tender to the bite—uncommon attributes for gnocchi in our neck of the woods. The sweet, charred carrots and fork-tender osso bucco melded together in a pool of butter sauce. The NY Sour, with its perfectly squared ice cubes and mesmerizing cab float, was just as beautiful as it was tasty.

The second course of house-made lamb sausage (with harissa and saffron broth) was every bit as delicious as the previous gnocchi dish. I enjoyed dipping each bite of the subtly gamey lamb into the harissa (spicy chili sauce) and broth. Once again, the paired drink, a smooth Little Italy (with High West American Prairie Reserve, Cardamaro, and Luxardo Amaro Abano), was just what the doctor ordered. This was the kind of drink you could sip for hours and be perfectly content with life.

Next up … the Cowgirl Creamery ‘Mt. Tam’ cheeseburger (with roasted red wine shallots and arugula). I opted for a turkey patty, my standard choice when dining at Big Orange. In retrospect, I should have gone with the beef. The award winning, yet quite strong Mt. Tam cheese overwhelmed both the turkey and the shallots. Scraping off half the firm but creamy cheese was only a slight inconvenience and definitely balanced the overall taste of the burger. No complaints on the Sundance Kid drink (with double rye, rhubarb honey, and grapefruit juice). I know Lee Edwards is a fan of infused honey, so I was pleased to see the ingredient work its way into one of the night’s cocktails.

The dessert course—a just-fried yeast doughnut, house-made coffee ice cream and candied pecans—proved to be my least favorite of the evening. I enjoyed the small doughnut with its fried cut-out hole resting on top, but found it to be a tad cold. A warmer version would have played quite nicely with the delicious coffee ice cream and crushed pecans. That said, the well-composed dessert was probably a casualty of delayed serving. The drink pairing, a Railroad Spike (Big Orange’s version of a Rusty Nail) was just not my cup of tea, so to speak. I’m not a fan of the medicinal taste of Drambuie, but major props on the monster-sized ice ball resting in the glass. 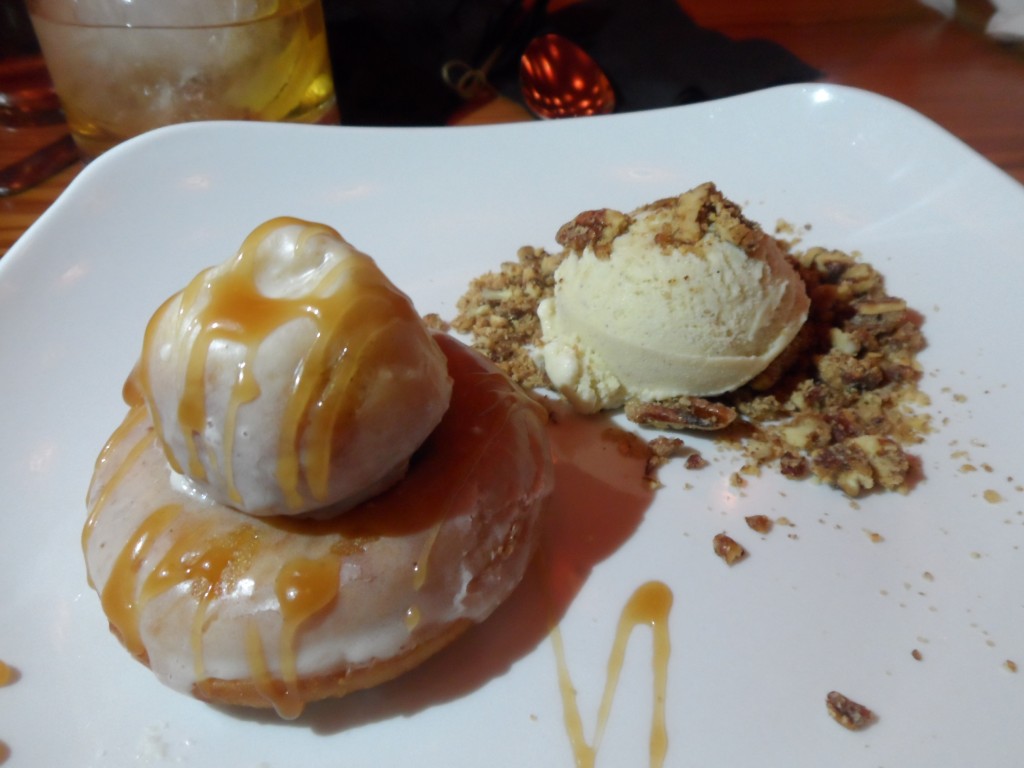 Slight criticisms aside, this was a fantastic showing for Big Orange Midtown. I was particularly excited (and subsequently impressed) about getting to experience chef Scott McGehee’s culinary creations. He did not disappoint.

In the end, the atmosphere was fun, the food was beyond what I expected, and the price ($50, excluding tax and gratuity) was very reasonable. Word on the street is that Big Orange, along with WLR cousin Local Lime, plan to do a couple of these dinners (each) throughout the year. I highly suggest you attend the next one.

Chances are … you’ll see me.