Monthly Feature
Shelley is back, keeping the beginner cooks up to speed!

Recently I’ve stumbled a bit in my quest to cook more often. I didn’t stop with last month’s basic basmati rice, but I didn’t get much past it either. Consequently, I’ve been struggling to write this month’s entry. But then I remembered a little gem of a recipe I stumbled across in an attempt to fill in the gaps (read: non-vindaloo night) during the week for a quick dinner. Enter: tilapia.

Honestly, if I’d known cooking fish was so easy, I would’ve started doing it years ago. Well, at least months ago. And it cooks so fast!! At this point I’ve probably made this dish about 5 times–all this year. Rob even made it once. More on that later.

I’ll set out a few tips/insights after the jump; here’s the recipe:

1. Set oven to 375
2. Line rimmed baking sheet with parchment paper
3. Place tilapia fillets flat side down on parchment paper (If using frozen, make sure they are thawed!)
4. Sprinkle with salt and pepper (I like sea salt. No need to over do it here.)
5. Spread an even layer of mayonnaise on each fillet
6. Sprinkle with FRESH parsley and FRESH dill (Make sure you are just laying the stems on the fish, actually take the 5 minutes to remove the leaves and chop them up.)
7. Place in oven and bake for 15 minutes
8. Let cool, maybe 3 minutes
9. Serve! 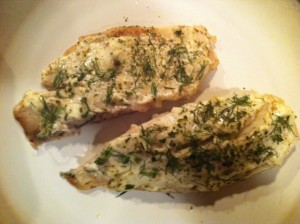 Additional Comments
It is really easy to overdo it with the salt and pepper; use a light hand. Mayonnaise has way more salt than I realized, and you will be getting tons of flavor from the parsley and dill. The picture here, I actually made the dish tonight. And for the first time I used fresh fish, and dried parsley. The dried parsley was a huge mistake. I decided to forgo the fresh stuff this time because I didn’t feel like going to the store to get it. I always feel wasteful when I buy it fresh because I never use it all before it goes bad. But after tonight I realize that I would rather not get my whole dollar’s worth than use the dried stuff. Seriously, fresh parsley is about a dollar and I was feeling wasteful. No more!! As for the fresh fish development, honestly I could go either way. I had been using frozen, individually vacuum sealed fillets–the kind that come in a giant bag–with great results. The fresh fish turned out well, but if given the option I would go back to frozen. Then again perhaps the third rate parsley played a role. The whole fresh herbs thing seems to be something real cooks recommend. I think they’re on to something. As for the mayo, I’m pretty sure any kind will do. I’ve been using light mayo with no issues.

In the future, I am going to try some alternatives; maybe use Dijon mustard, maybe use thyme, maybe even try something sweet. Rob actually tried an alternative the other day when he cooked the fish: Cooper’s barbecue seasoning. Now I love Cooper’s (I could go on about that BBQ place for a long blog of its own), and I love Rob, but BBQ spice rub ON TOP of the recipe above as-is was way too much salt in some bites; the spice on its own without the mayo, parsley, dill, salt and pepper would be a lot better, and probably worth a second try.

I do the same with fresh herbs, but I also dislike the dry stuff. Tilapia is so versatile, have fun cooking with it!