Special thanks to Mike for heading out to Galveston to cover this spectacular event!

With nearly 300 restaurants in the United States alone, Landry’s Restaurant Group is arguably one of the most dominant forces in casual dining today. Never content to rest on their laurels, their chefs push the envelope on what dining at a chain restaurant can be.

Nowhere is that passion and creativity on display more than at their annual Landry’s Iron Chef Competition. What started seven years ago with seven chefs competing in one category has morphed into 38 chefs from around the country going head to head in 7 categories, with an overall winner as well.

The concept is simple, the execution can be frantic, and the end result is often stunning. If you’re like me, you live for moments like these – watching intensely talented and competitive individuals at the height of their craft try to outdo one another to see who the best is. It’s a culinary all-star game, a chef’s table on steroids. And it’s breathtaking to watch.

I arrived at the Galveston Island Convention Center not sure what to expect and a little uncertain as to what I had gotten myself into. I made small talk with the other members of the media and very shortly after, we were whisked away to the competition kitchen.

I wasn’t sure what kind of role I would play in this dance – would I be judging, simply observing and detailing what was going on? I soon found out, I would be tasting everything. Sweet baby kitten feet, it was on!

I was immediately overwhelmed by the spectacle of a couple dozen chefs cooking, tasting, plating and presenting their dishes. Food was placed on the presentation table every seven minutes. Each chef prepared two plates, one for the judges and one for the kitchen to sample. Yours truly was lucky enough to sample pretty much everything that was presented. 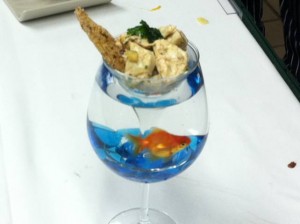 It truly is a sight to behold when watching these chefs in their element. I know we’ve all seem glimpses when watching the Food Network or whatever reality show they’re on, but you lose something when viewing through the eye of the television camera. And although many chefs have the reputation of being impossible-to-work-with egomaniacs, I saw none of that. Everyone was truly curious to see what the others were going to come up with.

The highlights for me were two dishes in particular. For plating/presentation, I don’t think anyone could top the originality displayed by Chef AJ Junnarkar (Houston Downtown Aquarium). His crabmeat mélange was served in a dish floated in a fishbowl, with a live goldfish swimming underneath. It was like nothing I would ever imagine to try. As far as taste, Chef Tony Riley (Chart House Tampa) outdid himself with a dish of Southwest Seared Scallops (say that five times, fast!), served with a corn salsa, cilantro oil and jalapeno crema. It was absolutely delicious.

Some of the other outstanding selections I had the pleasure to taste were a mole braised lamb shank with a chile spaetzle, Nutella chocolate cake, flat iron steak with brocollini and a potato and truffle blintz, and a to-die-for tiramisu (the overall winner from Chef Richard Hawthorne of Grotto Las Vegas). 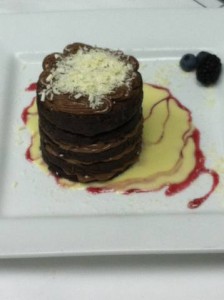 As an industry leader and large restaurant chain, Landry’s is often (unfairly, I think) painted as being the enemy of what good food should be. But if these chefs are any indication of where the Landry’s restaurants are now and where they’re headed, that sentiment couldn’t be further from the truth.

Ric Rosser of Saltgrass said, “It’s important to get things out there that most people aren’t always able to get.” At the end of the day, good food is good food, no matter who’s doing the cooking.

Pingback: i peed a little - so funny you might wet your pants